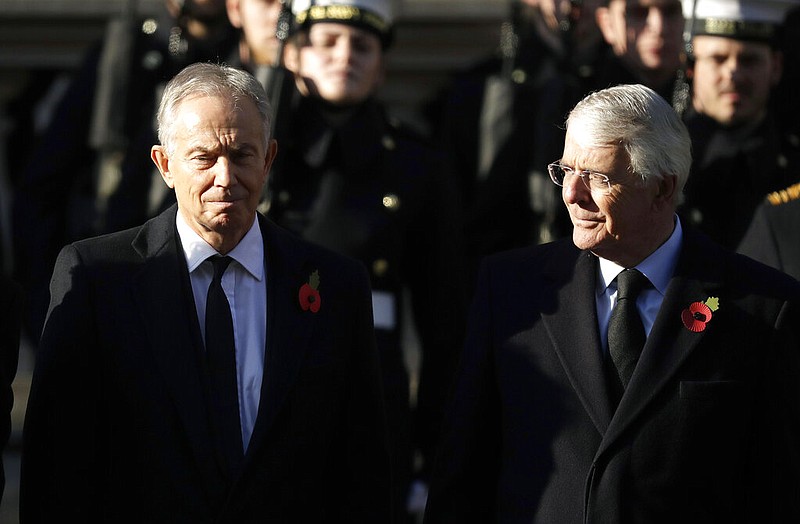 Former British Prime Ministers Tony Blair (left) and John Major attend the Remembrance Sunday ceremony at the Cenotaph in Whitehall in London in this Sunday, Nov. 10, 2019 file photo, Remembrance Sunday is held each year in honor of those who fought in past military conflicts. Blair and Major on Sunday, Sept. 13, 2020, joined forces to urge lawmakers to reject government plans to override the Brexit deal with the European Union. (AP / Matt Dunham )

LONDON -- Two former British prime ministers who played crucial roles in bringing peace to Northern Ireland joined forces Sunday to urge lawmakers to reject government plans to override the Brexit deal with the European Union, arguing that it imperils that peace and damages the U.K.'s reputation.

In an article in The Sunday Times, John Major and Tony Blair slammed the current British government for "shaming" the country with legislation that, in places, goes against the very deal it signed to allow for the U.K.'s smooth departure from the EU earlier this year.

Major, a Conservative prime minister from 1990 to 1997, and Blair, his Labor successor for a decade, said Prime Minister Boris Johnson's Internal Market Bill "questions the very integrity" of the U.K.

"This government's action is shaming itself and embarrassing our nation," they said, also describing the move as "shocking."

"It raises questions that go far beyond the impact on Ireland, the peace process and negotiations for a trade deal -- crucial though they are," Major and Blair wrote. "It questions the very integrity of our nation. If the government succeeds in its plans, what constitutional audacity will be beyond it?"

The legislation, which will be debated by British lawmakers this week, has led to a furious outcry within the EU, as it would diminish the bloc's previously agreed oversight of trade between mainland Britain and Northern Ireland if a U.K.-EU trade agreement isn't secured.

The British government has conceded that the legislation would break international law, but argues that it's an insurance policy for a potential "no-deal" scenario. Johnson has said the legislation is needed to end EU threats to impose a "blockade" in the Irish Sea that the prime minister asserted could "carve up our country."

British Justice Secretary Robert Buckland told the BBC on Sunday that the legislation was a "break-the-glass-in-emergency provision," and that he would resign if he believed the rule of law was broken in an "unacceptable" way.

EU leaders have furiously rejected Johnson's charge that the bloc is planning a major disruption to normal trade between mainland Britain and Northern Ireland.

Irish Foreign Minister Simon Coveney told the BBC that the "kind of inflammatory language" coming from the British government was "spin and not the truth."

Still, with the British government showing no sign of changing course, there are real concerns that the talks on a future trade deal between the U.K. and the EU could collapse within weeks. If that happens, tariffs and other impediments to trade will be imposed by both sides at the start of 2021.

The U.K. left the EU on Jan. 31, but it is in a transition period that effectively sees it benefit from the bloc's tariff-free trade until the end of the year while a future relationship is negotiated. Even before the latest standoff, discussions between the EU's chief negotiator, Michel Barnier, and his U.K. counterpart, David Frost, had made little progress.

One major element of the Brexit withdrawal agreement is the section related to ensuring an open border on the island of Ireland to protect the peace process in Northern Ireland.

The issue proved thorny during the more than two years of discussions it took to get a Brexit deal done, as the border between Northern Ireland and Ireland is the only land link between the U.K. and the EU.

The EU wanted assurances that the border would not be used as a back route for unlicensed goods arriving in Ireland from the rest of the U.K. -- England, Scotland and Wales. As a result, the two sides agreed there would be some kind of regulatory border between mainland Britain and Northern Ireland.

Major and Blair, who both vociferously opposed Brexit, said the legislation puts the 1998 Good Friday agreement that ended decades of violence in Northern Ireland at risk.

The pair said the bill "negates the predictability, political stability and legal clarity that are integral to the delicate balance between the north and south of Ireland that is at the core of the peace process."

It's unclear whether the legislation will get through the British Parliament, where resistance looms and even a number of Johnson's fellow Conservatives are uneasy at the prospect of the government breaching international law.

Tobias Ellwood is one lawmaker who has said he could not accept the legislation, arguing that the bill diminishes "our role-model status as defender of global standards."

The opposition Labor Party will vote against the bill and seek to amend it, shadow Cabinet Office minister Rachel Reeves said Sunday on BBC-TV.

"The bill as it stands, the Labor Party, and it looks like a large number of Conservative MPs, will not be able to support it," Reeves said. "I cannot go through ... knowing that we are deliberately and consciously breaking international law."

Buckland, the justice secretary, had his own warning: "If I see the rule of law being broken in a way I find unacceptable, then of course I will go," he said when asked if he would resign if Britain acted on its plan to unilaterally override the legally binding Brexit withdrawal agreement. "We are not at that stage."

Buckland said he expects the U.K. will resolve its differences with the European Union in discussions in the coming weeks and won't have to act on Johnson's plan. He described the prime minister's proposal as an insurance policy.

European Union leaders stepped up pressure on Johnson's government to fully implement the Brexit deal and drop the controversial bill.

"International credibility of U.K. signature at stake," Charles Michel, the president of the EU leaders' council, said on Twitter.

Michel said he had discussed the issue by phone with Irish Prime Minister Micheal Martin.

Barnier of the EU negotiating team tweeted: "We agreed this delicate compromise with @BorisJohnson & his gov in order to protect peace & stability on island of Ireland."

The EU has given the U.K. three weeks to amend the legislation or face legal action.

Johnson defended the bill in a Telegraph newspaper article Saturday and called on the bloc to take its threats off the table. The measures are needed to protect the free flow of goods and services between Northern Ireland and the rest of the U.K., he wrote.

​​​​​Information for this article was contributed by Pan Pylas of The Associated Press; and by Lucca de Paoli and Joe Mayes of Bloomberg News. 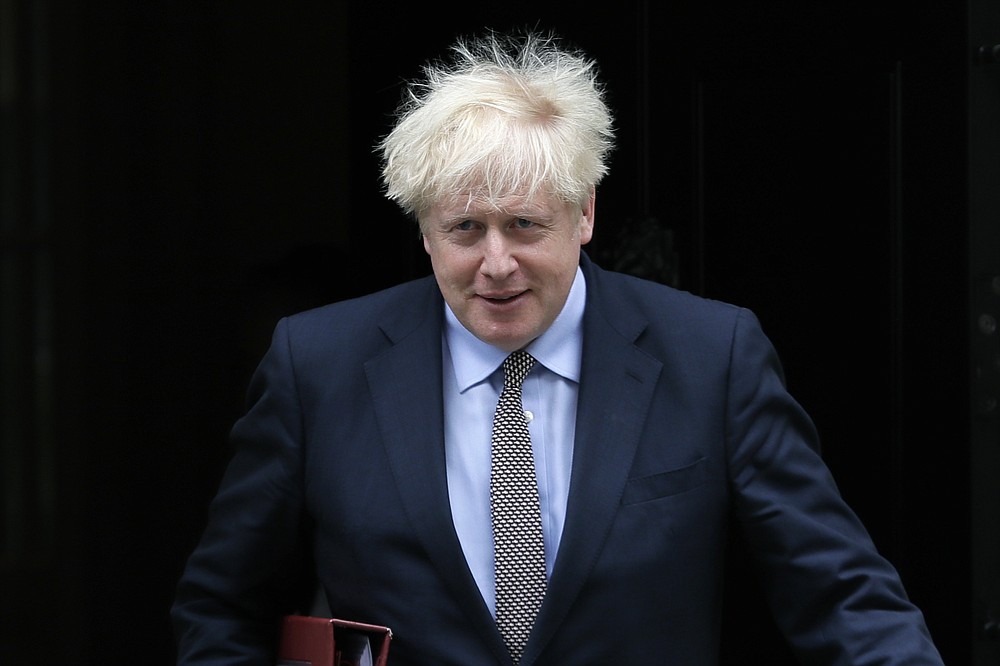 FILE - In this Wednesday, Sept. 9, 2020 file photo, Britain's Prime Minister Boris Johnson leaves Downing Street to attend the weekly session of Prime Ministers Questions in Parliament in London. British Prime Minister Boris Johnson has strongly defended his controversial plan to override sections of the Brexit deal that he negotiated with the European Union, arguing that the bloc has an “extreme” interpretation of the treaty that could jeopardize the future of the U.K. In a column Saturday, Sept. 12, 2020 in The Daily Telegraph, Johnson said the Internal Market Bill is required to end EU threats to impose a “blockade” in the Irish Sea that he argues could “carve up our country.” (AP Photo/Kirsty Wigglesworth, file) 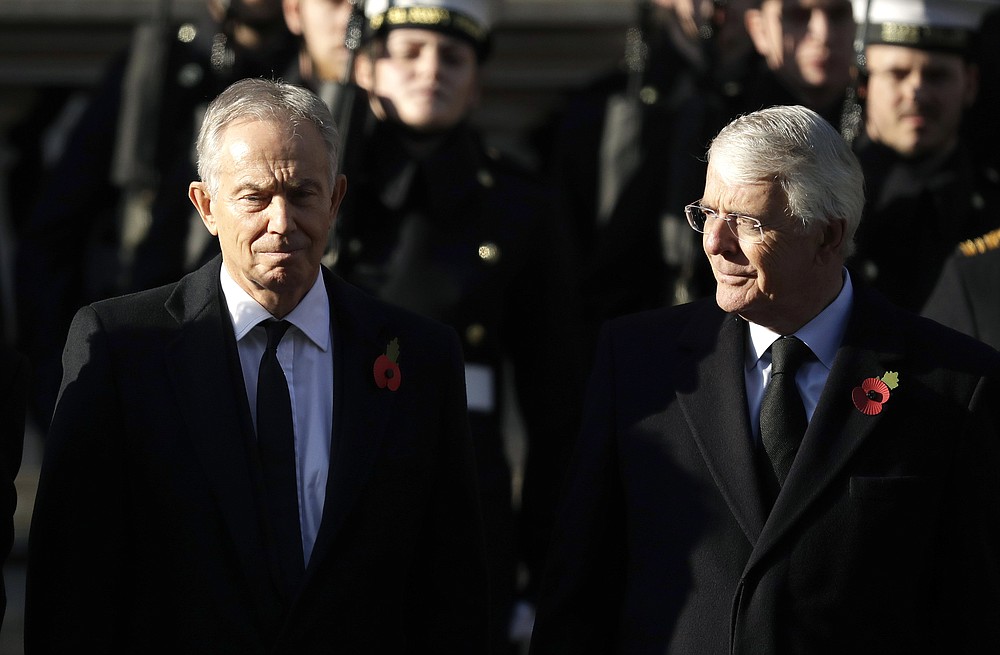 FILE - In this Sunday, Nov. 10, 2019 file photo, former British Prime Ministers Tony Blair, left and John Major attend the Remembrance Sunday ceremony at the Cenotaph in Whitehall in London. Remembrance Sunday is held each year to commemorate the service men and women who fought in past military conflicts. The two former British prime ministers who played crucial roles in bringing peace to Northern Ireland joined forces Sunday, Sept. 13, 2020 to urge lawmakers to reject government plans to over-ride the Brexit deal with the European Union, arguing that it imperils that peace as well as damaging the U.K.’s reputation. (AP Photo/Matt Dunham, File)
ADVERTISEMENT