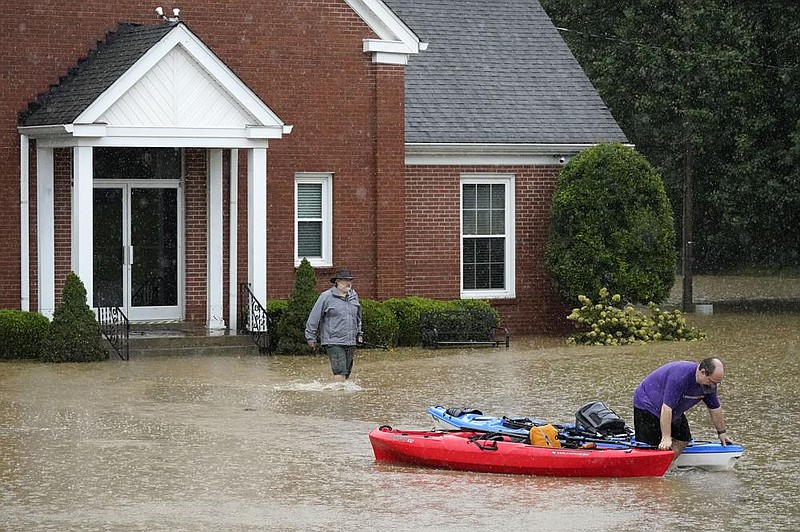 Phillip Brackett (right) a deacon at Mill Creek Church of Christ in Nolensville, Tenn., pulls two kayaks through the parking lot after a flash flood Sunday put several inches of water inside the church. At left is preacher Nick Fowler. (AP/Mark Humphrey)

A sheriff's deputy in Georgia has been fired after being captured on video repeatedly punching a Black man during a traffic stop, authorities said Sunday.

The deputy was being let go for "excessive use of force," the Clayton County sheriff's office said in a statement. It did not identify the deputy, but said a criminal investigation has been turned over to the district attorney's office.

Roderick Walker, 26, was arrested and beaten after Clayton County sheriff's deputies pulled over the vehicle he was riding in Friday with his girlfriend, their 5-month-old child and his stepson for an alleged broken taillight, his attorney, Shean Williams of The Cochran Firm in Atlanta, said Sunday. The deputies asked for Walker's identification and got upset and demanded he get out of the vehicle when he questioned why they needed it since he wasn't driving, Williams said.

The subsequent arrest, captured on video by a bystander and shared widely, shows two deputies on top of Walker, one of whom repeatedly punches him. Walker's girlfriend screams and tells the deputies Walker said he can't breathe.

As Walker is handcuffed, the deputy who punched him tells the bystander that Walker bit him.

A person who answered a call to the sheriff's office said he could not comment further, citing an ongoing investigation.

Two people were killed and six others wounded in a shooting early Sunday that took place blocks away from the Rutgers University campus in New Brunswick, N.J., authorities said.

It was not immediately clear what led to the violence, but it did not involve students from the university, according to a statement from the Middlesex County Prosecutor's Office.

A spokeswoman for the prosecutor's office declined to answer further questions about the shooting, which took place around 1:30 a.m. on Delafield Street. People who live on the street said that the shooting appeared to be connected to a party at a home on that block.

The two people who were killed -- both male -- were pronounced dead at the Robert Wood Johnson University Hospital, according to the prosecutor's office. A spokeswoman for the hospital referred questions about the victims to the New Brunswick Police Department, which is investigating the shooting.

"The notice provides false or misleading information" and residents may wonder if state law has changed and whether their registration has lapsed, U.S. District Judge William Martinez said in a 10-page order issued Saturday. Martinez said he was "deeply troubled" by the Postal Service's conduct as he granted a temporary restraining order and set further proceedings.

Colorado Secretary of State Jena Griswold, a Democrat, asked the court to stop the mailing in the state, saying in a Saturday complaint that some voters "will be confused by the false statements by the Postal Service and will not vote in the upcoming elections."

In Colorado, eight other states and the District of Columbia, voters don't request ballots because one is mailed to every registered voter, Griswold said in a tweet. "But the @USPS is confusing our voters by telling them to request a ballot," she said. 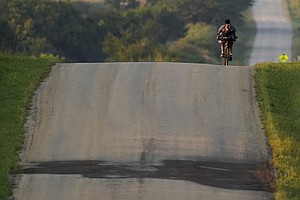 Photo by AP
A man rides a bicycle along a rural road Saturday near Emmet, Kan. (AP/Charlie Riedel)

The billionaire Bloomberg launched his own campaign for the Democratic nomination late last year amid worries about Biden's strengths. Despite spending $1 billion on his campaign, Bloomberg struggled and dropped out in March, quickly endorsing Biden.

One of the world's wealthiest men with a net worth estimated to exceed $60 billion, Bloomberg promised throughout his campaign that he would help Democrats try to defeat President Donald Trump regardless of how his own White House bid fared.

He exited the presidential race pledging to spend "whatever it takes" to defeat Trump, and has already invested millions to support Democrats up and down the ballot. Bloomberg transferred $18 million from his presidential campaign to the Democratic National Committee, and transferred its offices in six key swing states to the local Democratic parties there.