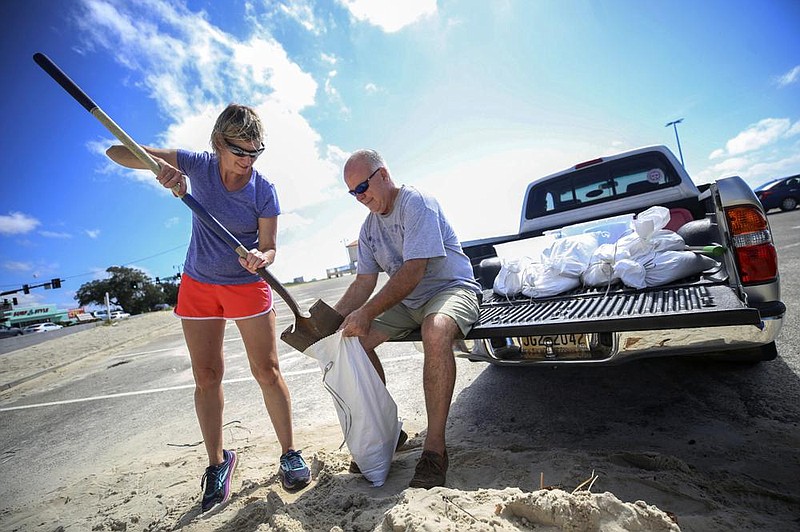 ST. PETERSBURG, Fla. -- Tropical Storm Sally slowed down Sunday as it churned northward toward the U.S. Gulf Coast, increasing the risk of heavy rain and dangerous storm surge before an expected strike as a Category 2 hurricane in southern Louisiana.

"I know for a lot of people this storm seemed to come out of nowhere," Louisiana Gov. John Bel Edwards said. "We need everybody to pay attention to this storm. Let's take this one seriously."

Forecasters from the National Hurricane Center in Miami said Sally is expected to become a hurricane today and reach shore by early Tuesday, bringing dangerous weather conditions, including risk of flooding, to a region stretching from Morgan City, La., to Ocean Springs, Miss.

Edwards urged people to prepare for the storm immediately. He also said there are still many from southwestern Louisiana who evacuated from Hurricane Laura into New Orleans -- exactly the area that could be hit by Sally, which is a slow-moving storm.

"Based on all of the available information, we have every reason to believe this storm represents a significant threat," he said, adding that the coronavirus adds a layer of complexity to storm preparations.

There are still some 5,400 members of the state's National Guard mobilized from Laura, and they will assist with Sally.

[Video not showing up above? Click here to view » https://www.youtube.com/watch?v=naCJOEWr0Lw]

The system was moving west-northwest at 9 mph late Sunday afternoon. It was centered 165 miles south of Panama City, Fla., and 215 miles east-southeast of the mouth of the Mississippi River. On Sunday, Florida's Gulf Coast was battered with windy, wet weather.

Pensacola, on Florida's Panhandle, was bracing for 10 to 15 inches of rain.

Sally could produce rain totals up to 20 inches by the middle of the week, forecasters said. Its maximum sustained winds Sunday afternoon were 60 mph.

"That system is forecast to bring not only damaging winds but a dangerous storm surge," said Daniel Brown of the Hurricane Center. "Because it's slowing down, it could produce a tremendous amount of rainfall over the coming days."

This isn't the only storm in the Atlantic basin. Paulette gained hurricane status late Saturday and was expected to bring storm surge, coastal flooding and high winds to Bermuda, according to a Hurricane Center advisory. Once a tropical storm, Rene was forecast to become a remnant today. Tropical Depression 20 was expected to strengthen and become a tropical storm by Tuesday, forecasters said.

"This week is essentially the peak of the hurricane season," Brown said Sunday. "It is quite active across the tropics today."

A hurricane watch is in effect for east of Ocean Springs to the Alabama-Florida border, and all northern Gulf Coast states are urging residents to prepare.

"It is likely that this storm system will be impacting Alabama's Gulf Coast," Alabama Gov. Kay Ivey said. "While it is currently not being predicted as a direct hit to our coastal areas, we know well that we should not take the threat lightly."

She urged residents to prepare and stay informed of the storm's path in the coming days.

​​​​​Information for this article was contributed by Julie Walker of The Associated Press.