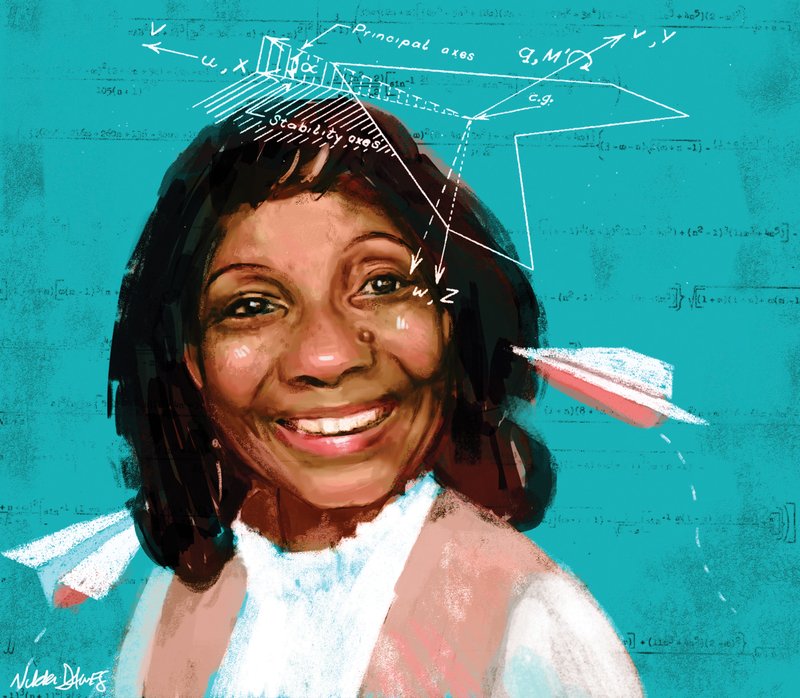 Physicist and mathematician Dorothy Estheryne McFadden Hoover was one of the “Hidden Figures” featured in Margot Lee Shetterly’s bestselling book.

Hoover was born in 1918. After graduating from high school at the age of 15, Hoover moved to Pine Bluff to enroll at Arkansas Agricultural, Mechanical, and Normal College (AM&N), now the University of Arkansas at Pine Bluff. She majored in math at a college that focused on agriculture, mechanics and education and graduated with a bachelor of science degree in mathematics in 1938, two months shy of her 20th birthday. There were only two math majors in her class of 135 students.

After graduation, she taught school in rural Jesup, Georgia, earning $600 a year. In 1943, Hoover earned her master’s degree in mathematics from Atlanta University, a historically Black college. Her thesis was titled “Some Projective Transformation and Their Applications.”

As she was finishing her master’s program, Langley Research Labs began hiring Black female mathematicians as a result of President Franklin D. Roosevelt’s prohibition of racial discrimination in the national defense industry. Hoover was a part of a class of female mathematicians, both Black and white, hired to work as “human computers” and aid the development of aeronautical technology in World War II.

Langley was originally segregated when Hoover began her work there, with Black women assigned to work in the West Area of Langley. Eventually, she was one of the first West Area “computers” to be asked to join an integrated research group. Hoover then worked directly with NASA engineer Robert T. Jones, who was known as “one of the premier aeronautical engineers of the twentieth century.” By 1946, Hoover was completing calculations and was widely relied on by Jones; her work was increasingly recognized as important to the aeronautics field. She worked at Langley from 1943 to 1953.

Hoover became one of the first Black women published out of NACA/ NASA. She published two articles in 1951 with co-author Frank S. Malvestuto addressing “thin sweptback tapered wings” on aircraft. Being listed as a co-author was a landmark accomplishment, given that women, white or Black, were not listed on research papers at the time — only white male engineers were.

Her contribution had real-world application in the development of America’s first jet fighter, the Sabre. It was the United States’ first swept-wing fighter jet that could counter the similarly winged Soviet MiG in the high-speed dogfights of the Korean War.

Today, every plane that flies at supersonic speed utilizes delta or swept-back tapered wings, including commercial jets, fighter planes and the space shuttle.

Hoover left Langley with the title of an aeronautical research scientist. In 1954, she earned her second master’s degree, this one in physics at the University of Arkansas. A portion of her 1954 master’s thesis, “On Estimates of Error in Numerical Integration,” was included in the Proceedings of the Arkansas Academy of Science the following year.

She is believed to be the first Black woman to earn two technical master’s degrees. She was also recommended for and received the John Jay Whitney Fellowship at the University of Michigan, where she began working toward a doctoral degree in physics.

Eventually, Hoover returned to civil service, first working in the U.S. Weather Bureau and then transferring to NASA’s Goddard Space Flight Center. While at Goddard, Hoover became the first Black woman to be promoted to a GS-13, a prominent position within the U.S. government employment system. Her willingness to move and adapt to provide for her family and chase her dreams allowed her to be the first Black woman to achieve a GS-9 and later GS-13 pay level as part of the government pay scale. She provided for her family in a way she never knew possible as a child growing up in Jim Crow Arkansas.

After her retirement, Hoover wrote and published a book on the history of the African Methodist Episcopal Church, titled “A Layman Looks with Love at Her Church.” She died on February 7, 2000, in Washington, D.C.

Hoover became one of the first Black women published out of NACA/NASA. She published two articles in 1951 with co-author Frank S. Malvestuto addressing “thin sweptback tapered wings” on aircraft.