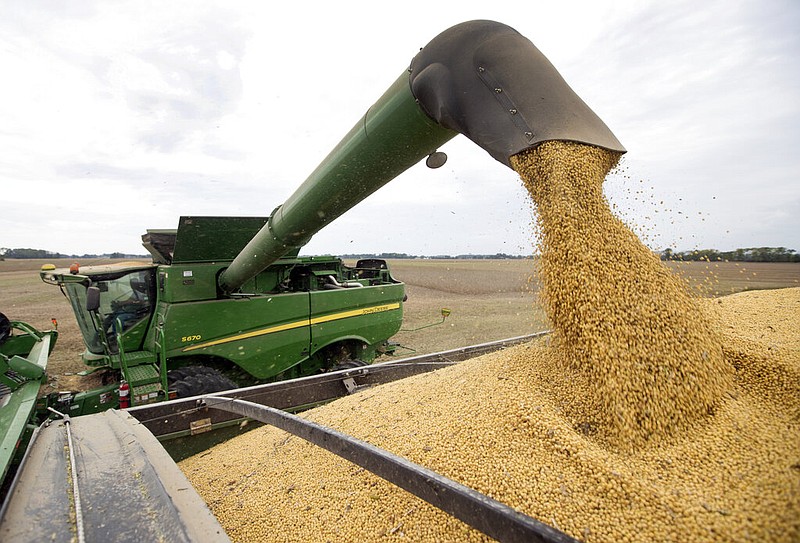 Soybeans are offloaded from a combine during the harvest in Brownsburg, Ind., in this Sept. 21, 2018, file photo. (AP / Michael Conroy )

In a year that has otherwise been a tough slog for soybean producers and other farmers in the United States, a silver lining emerged last week: China, the world’s largest importer of soybeans and many other commodities, booked a purchase of about 644,000 metric tons of U.S. soybeans for delivery in the 2020-21 marketing year, according to the U.S. Department of Agriculture.

The purchase is approximately equal to 24 million bushels.

Scott Stiles, extension economist for the University of Arkansas System Division of Agriculture, said that while the single-day purchase is notably large, it wasn’t quite record-breaking, and the timing was in keeping with normal cycles.

“China typically sources their soybeans from Brazil from late January through August or September,” Stiles said. “Once their supplies are exhausted, they usually begin sourcing them from the United States. They’ll buy from us through January or so, whenever the Brazilian harvest gets in the export pipeline.”

While the purchase is not inherently part of the Phase 1 trade agreement between the U.S. and China, which went into effect in February, it will count toward fulfillment of those obligations, Stiles said.

The USDA requires U.S. exporters to report any single-day sale of 100,000 tons or more of a single commodity. So while “the public doesn’t necessarily see every purchase made by a foreign buyer,” Stiles said, “there have been weeks recently where China is making a significant purchase every day.”

According to the USDA, China is projected to import approximately 99 million metric tons of soybeans in the 2020-21 marketing year, or more than 8 million metric tons each month on average. The September purchase is the latest in a series of large purchases from China.

Acco rd i n g to t h e U.S.-China trade agreement, China committed to an annual purchasing target of $36.6 billion in U.S. agricultural products. As of July, China had purchased only about $9.9 billion in U.S. agricultural products, well behind its year-to-date target of about $21.3 billion, according to the Peterson Institute for International Economics.

While the soybean purchase is not specifically a boon to Arkansas growers, Stiles said the state’s proximity to the Gulf of Mexico is an advantage.

“Most of our soybeans are earmarked for export, one year to the next,” he said.

Stiles said the effect of the derecho event won’t truly be known until harvest is complete. In a Crop Production Report released Friday, the USDA’s National Agricultural Statistics Service adjusted its forecast for U.S. soybean production down 3% from previous forecasts, to 4.31 billion bushels, with an average record high of 51.9 bushels per harvested acre.

According to the report, Arkansas growers are projected to average 49 bushels per acre, with total 2020 production of about 142.6 million bushels.