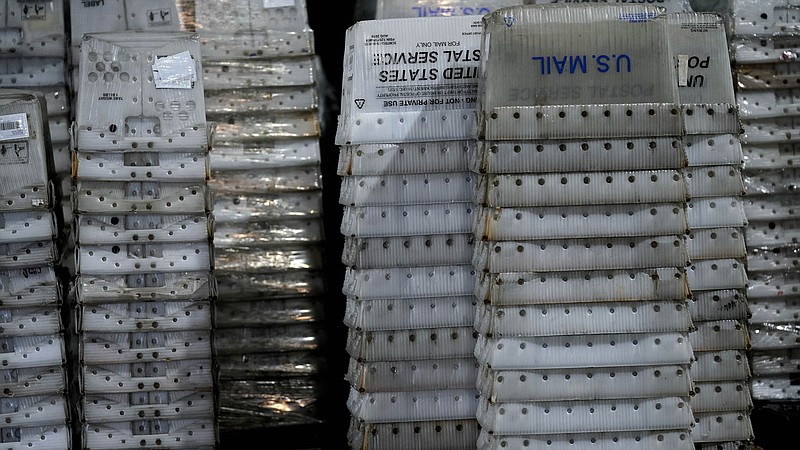 FILE - In this Thursday, Sept. 3, 2020 file photo, empty boxes await packages at the Wake County Board of Elections as workers prepare absentee ballots for mailing in preparation for the upcoming election in Raleigh, N.C. Democrats are unveiling new operations to try to make it easier for their voters to cast ballots. Both parties are trying to get their voters to cast ballots by mail, despite President Trump's groundless attacks on the method. The GOP is asking new voters it registers to request absentee ballots and sending request forms for mail ballots to its voters in several places. (AP Photo/Gerry Broome, File)

DENVER -- Democrats are rolling out an expanded online portal that allows people to register to vote and request mail ballots in their state, and it even helps digitize their signatures on their paperwork.

The updates to the Democratic National Committee's IWillVote.com are an example of the latest way both parties have tried to adapt the mechanics of modern campaigning to the realities of voting during the pandemic.

"The stakes for our country have never been higher, and we're making sure Americans have all the information they need in order to make their plan to vote and send Joe Biden and Kamala Harris to the White House," Democratic National Committee Chairman Tom Perez said in a statement Monday.

Both major parties have rejiggered their get-out-the-vote playbooks. The Democrats' adjustment has been most dramatic, as they've largely suspended the door-knocking that has been a staple of election years. Instead, they've taken their field program digital, texting and calling potential voters and talking them through the newly complex logistics of voting, either in person or via mail ballot.

Republicans are also urging their voters to cast ballots by mail, touting the method to new registrants and promoting it in mailings, some of which include applications for absentee ballots. But their task has been complicated by President Donald Trump's claim that mail voting will lead to fraud, which has led far fewer GOP voters to request mail ballots than Democratic voters.

Republicans have a potential advantage over Democrats, though -- they've restarted face-to-face get-out-the-vote programs. "We are rolling out one of the largest, most aggressive and battle-tested Get Out The Vote programs focused on Early Voting and voting on Election Day," Republican National Committee spokeswoman Mandi Merritt said.

The party has its own online portal, Vote.GOP, to register voters and help them find ways to vote, and Merritt said it received 1.1 million visitors during last month's party convention.

But Democrats are hitching more of their hopes to digital organizing. Their redesigned website provides different methods of registering to vote and requesting absentee ballots tailored to voters' home states. It allows voters to either register online, request ballots online or have the materials sent through the mail, with a postage-paid return envelope included to submit the ballot to the local elections office.

The site even allows voters in certain states to provide signatures on their online ballot applications. These signatures will often go on file with elections offices to be checked against voters' signatures on the actual absentee ballot to verify their identity.

Democrats have already adjusted their phone banking strategy, with volunteers and staffers now spending time talking voters through how to request a ballot in their local jurisdiction in a model that some have compared to tech support. Those conversations will now direct voters to the IWillVote.com site, which is also available in Spanish.

Still, the party stresses that it isn't trying to force voters to cast ballots by mail, and the website also provides instructions on in-person early and Election Day voting tailored to the user.