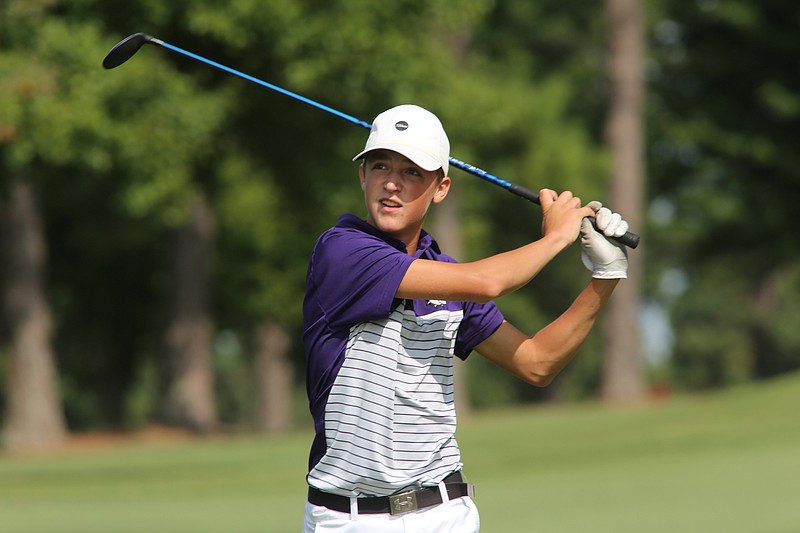 FAYETTEVILLE -- Fayetteville still has plenty of work to do before the Bulldogs are ready for postseason play.

That was the assessment of Fayetteville golf coach Scott Williams Monday following 18 holes in the Bulldog Invitational at the Fayetteville County Club. Little Rock Catholic (307) won the eight-team tournament followed by Conway (312) in second place and Fayetteville (313) in third.

Most of the boys and girls teams who participated in the Fayetteville Bulldog Invitational Monday were from the 7A-Central Conference. That is by design so Williams could get an opportunity to see how the Bulldogs would hold up against teams they'll see in the Class 7A state tournament. Fayetteville and Fort Smith Southside represented the 7A-West while Mountain Home represented the 6A-West Conference.

"We never get to play those guys in the Central (Conference) like we do in football, basketball, and things like that," Williams said. "I put this tournament together to host teams I feel like we needed to see. So, we get them up here and get a look at them."

State tournament for the girls will be held at Bryant on the last week of September. Elizabeth Atchley was second-best overall Monday for the Lady Bulldogs, who won the girls division after shooting 237.

"Elizabeth shot a 77 and that is excellent for her," Williams said.

The boys state tournament will be the first week of October at Shadow Valley in Bentonville.

I was talking with coach (Brian) Loeb from Little Rock Catholic and I think we all have the idea there's four or five teams that could win state for the boys. Bentonville should be the favorite because they're the defending champs and they return everybody."

Freshman Connor Goens shot a 77 on the par-70 course to tie teammate Zack Knight for low score for Fayetteville.

"I hit really good irons and didn't make a lot of putts, but I made a few," said Goens, who was listed as the No. 5 golfer for Fayetteville on Monday. "Everything fell together and I felt pretty good, overall, about how I played."

Andrew Payne was the boys medalist for Little Rock Catholic, the tournament winner. Catholic coach Brian Loeb said his team will use Monday's win as a primer for the state tournament in Bentonville.

"Our guys were focused and had a good time," Loeb said. "I appreciate coach Williams for having us out here because it gives us some experience playing against teams from the West. It's a great benefit."