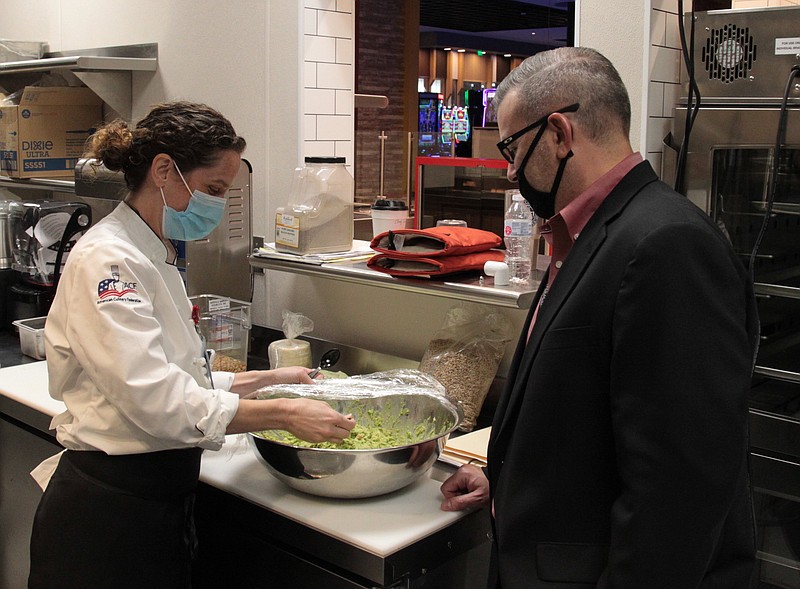 Editor's note: This is part two of a two-part series on Saracen Casino Resort.

After 33 years in the food service industry, it would be fair to say that Little Rock native Todd Gold knows his way around a kitchen, and if longevity alone isn't evidence enough, he has enough awards and honors from the American Culinary Federation and the ACF Central Arkansas Cooks Association, among others, to line a fair sized trophy case.

At 48, Gold had spent 25 years with what is now the University of Arkansas-Pulaski Technical College Culinary Arts and Hospitality Management Institute, which he started as the Arkansas Culinary School in 1995, merging with Pulaski Tech in 2006.

In a telephone interview with the Pine Bluff Commercial, Gold, speaking in rapid fire staccato sentences, rarely pausing for breath, recounted his 33 years in the culinary industry.

"When I started the culinary cchool, it wasn't a paid gig, it was just kind of my pet project, so I always did something else," Gold said. "During that time I was the corporate chef for 10 years with Acxiom Corp., for 5½ years I owned the Purple Cow restaurants, bringing them into today's age, I expanded them and grew them, so I've done a little bit of everything."

Gold said that during his time at Acxiom, he worked at Acxiom Plaza on Riverfront Drive in Little Rock, where his cooking earned the building a nickname.

"All the executives who worked there called it 'Plaza 25,'" he said, "because they said when you came to work in that building you gained 25 pounds eating my food. That was a long-running joke with Charles Morgan and them."

That "little bit of everything" began back in 1987, Gold said, when he got his first taste of restaurant work at one of Little Rock's legendary eateries.

"I got my first restaurant job at the age of 15," he said. "I started out washing dishes at Bruno's Little Italy."

Gold said he worked at Bruno's from the age of 15 until he turned 18 and enrolled in culinary school.

"I came in as a dishwasher and by 18 I was the kitchen manager," he recalled. "I'd come in at six o'clock in the morning, I was carrying the key and the alarm code and I would start the meat sauce and the marinara sauce, the Manicottis and the Cannellonis, the lasagna, and then get the lines set up.

"In that day, Scott Wallace was the owner and we'd do lunch for a five spot on Bowman curve so you could come in and get your pick of several different things for $5 including tax and I'd start cooking," Gold continued. "About the time the restaurant would fill up, Jay and Vince Bruno would come and bail me out. That was my job for years and years and years and I still run into Vince and Gio from time to time and we reminisce about those years back in the '80s."

When Gold left Bruno's Little Italy for culinary school in 1991, he went to Memphis where he trained at the La Maison Meridian (Memphis Culinary Academy) and, after graduating in 1993, worked as sous chef and executive chef for prestigious hotels, country clubs and restaurants in the Little Rock area. From 2007 to 2012, Gold was the president and owner of the Purple Cow Restaurants.

Professional accolades have been numerous throughout Gold's career.

The American Culinary Federation-Central Arkansas Cooks Association recognized him with its President's Award in 2000, the Pursuit of Excellence Award in 2001, and Chef of the Year Awards in 2003, 2006 and 2011, making him the first chef in Arkansas to win this award three times.

He has also been honored with the Formica and Ben E. Keith Culinary Community Service Award in 2002, and again in 2007. In 2009, Arkansas Business picked Gold as one of Arkansas' 40 Under 40, and he has also been featured on the cover of Little Rock Family.

In 2015, he was inducted into the Arkansas Hospitality Association Hall of Fame. Most recently Gold was named one of the 10 chefs in Arkansas to watch by the Culture Trip magazine.

Hiring Gold to oversee the food and beverage operations at the casino provided the opportunity to provide a sharp Arkansas focus to the cuisine offerings, said Carlton Saffa, project manager for Saracen Casino Resort. Saffa said the goal was to hire the top talent in the business to bring them all under one roof and provide patrons with a dining experience that, if all goes according to plan, they cannot get anywhere else, but also one with its roots buried deep in the fertile soil of the Arkansas Delta.

"We've got some hitters out here," Saffa said. "We've hired Chef Derek Smith away from Folk's Folly restaurant in Memphis to be our chef de cuisine. We've hired Chef Cynthia East, the chef who built Tacos 4 Life, to be our executive chef. We've got a chef who worked for the Davidson Hotel chain and opened up high end restaurants all over, and by the way, Cindy, before she was at Tacos 4 Life, was at the Ritz-Carlton in Vail. I've got a food and beverage team that I'd put up against anybody. Nobody's got talent like we've put together here."

Saffa said that Smith is the nephew of Jefferson County farmer Lawrence "Wink" Conyer, who used to farm the field where Saracen Casino Resort now sits.

"I love it that Wink's nephew is cooking fine food on top of land that Wink himself farmed," he said.

Saffa said the reason he places so much of his emphasis on food is simple.

"I'm a food guy," he said. "I spent a lot of my younger years at the Capitol Hotel restaurant, and I'm not going to bring in anything here that's second rate. To me, the food is every bit as important as the gaming, and I intend for everything we offer at Saracen to reflect that."

That isn't to say that gaming has been neglected in planning Saracen Casino Resort, however. Building a brand-new casino came with some advantages, Saffa said, especially when it comes to the gaming floor.

"Some of these slots you see out here are brand new, as in nobody has them," he said, gesturing toward the 80,000-square-foot gaming floor. "They don't even have some of these in Vegas, because, think about it, a casino replaces slot machines as the old machines wear out, so they're generally replacing only a few at a time. But we had to order 2,000 at once so we've got the latest, most cutting edge designs in the industry."

Building a brand-new casino in the middle of a global pandemic that has literally changed the ways people interact socially came with some serious challenges, Gold said, especially considering that to be successful, a casino and its accompanying adjunct businesses depend on volume. In food and beverage service, much of that volume is accommodated through the mainstay of casinos throughout the world, the all-you-can-eat buffet.

Quapaw Kitchens, an area that began its design life as Saracen's buffet, received a redesign in midstream as Gold worked with architects to come up with a new concept while honoring the design elements that, he said, were intended to be seen.

"We've got wall accents that are colored in eggplant purple," he said. "Our floor design and design along the back wall suggests tractor tire treads out in the field. It's all about the agriculture here."

To incorporate the new reality without killing the overall concept, planners came up with a new concept, one that allows patrons to file through at appropriate spacing and to select the items they want from servers who will be standing between patrons and the steam tables, thereby eliminating crowding and shared use of serving utensils while preserving the ambiance.

"I've got three pallets of stanchions ordered and when they're installed, I'll have servers lined up," Gold said. "The problem at a lot of casinos is when they opened back up, they seated patrons and had servers come out and say, 'here's what's on the buffet.' People don't want that. They want to see, they want to point and say, 'I want that chicken breast right there.' So our servers will be standing on this part and if they want that chicken breast right there, we can get it for them. So they still get the buffet experience, we just don't call it a buffet anymore."

As the tour continued around the floor, Saffa spotted Conyer helping position some gaming tables.

"I love this," he said. "Wink doesn't even work here, he just loves being involved. And what I really love about this culinary story is that this land where he used to farm, his nephew is cooking on it. It's just too cool. It's like coming full circle."