Official: Vaccine is likely this year 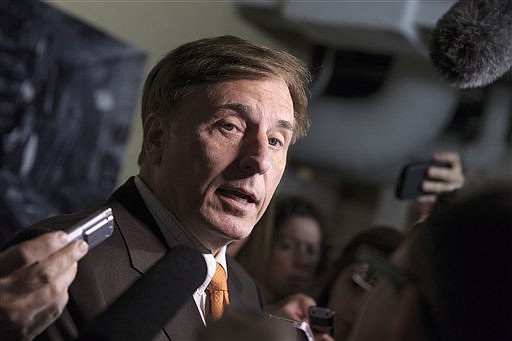 FILE - In this July 25, 2014 file photo, then-Rep. John Fleming, R-La., speaks to reporters on Capitol Hill in Washington. Fleming now works in the White House, including on the Coronavirus Task Force.

WASHINGTON -- A covid-19 vaccine will likely be ready by late December, a member of the president's coronavirus task force said Monday.

Asked about the role politics will play, Dr. John Fleming, an assistant to the president for policy and implementation, said the vaccine won't be distributed until the experts say it's ready.

"We already have three candidates in the final stage of testing, and we expect to have at least one ready before the end of the year," he said during an interview with the Arkansas Democrat-Gazette.

"For anything to be approved in the way of a vaccine, it has to go through different sorts of committees that have no contact, no involvement, with the political sphere at all," he said. "Until it's checked, until the box is checked by all of them, including the [U.S. Food and Drug Administration], this vaccine does not go out to the general population. ... There's no cutting corners."

"It's going to be as safe as any, in fact most, vaccines," he said. "We expect it to be very effective."

The process is moving rapidly, he said.

"We estimate six or eight months to go from beginning the process to actually having ... delivered the vaccine to the population," he said. "The question is how were we able to do that now when we've never done it before. The answer is that President [Donald] Trump has put billions of dollars behind a number of different vaccine candidates out there."

The federal funding has been important, he said.

"The drug companies, as a whole, are not taking the financial risk they would normally take, and so they're gearing up their manufacturing operations. They're doing things in parallel that, before, they would have to do in sequence," he said.

Dr. Robert Hopkins, a professor of internal medicine and pediatrics at the University of Arkansas for Medical Sciences, said "guarded optimism" is warranted.

"I am hopeful," said Hopkins, who serves as chairman of the National Vaccine Advisory Committee.

Creating an effective vaccine is "a big job," he said.

"Generally for a new vaccine to get approved, there's a timeline of a minimum of five to 10 years," Hopkins said.

That includes a time-consuming three-phase set of clinical trials. The vaccine isn't tested on large numbers of trial participants until Phase 3.

Given the vast amount of resources dedicated to a covid-19 vaccine, researchers have been able to speed things up, he noted.

Due to Operation Warp Speed, steps that are typically done sequentially, including ramping up production capacity, are occurring simultaneously, Hopkins said.

"We now have between four and six vaccines in the United States and Europe that are in that Phase 3 trial section or are getting ready to start that, so it is possible that we'll get enough information from those trials between now and the end of the year that the FDA can go through its standard approval process and approve a vaccine," he said. "But this is unprecedented as far as the speed."

While it is possible that a vaccine may be available by the first of next year, "it's likely to be at least middle or later of next year before we have enough vaccine to vaccinate a wide swath of our population," he said.

Regulatory shortcuts, such as an "emergency authorization process," are risky, he said.

"I think we're much better off going through our standard approval process, which is the standard worldwide for approval of vaccines," he said. "The evaluation of safety, the evaluation of efficacy and an independent review of that data is absolutely critical."

Jennifer Dillaha, the state epidemiologist, is skeptical that a vaccine will be ready by the end of the year.

"I'm not sure if that's possible. I would think for that to happen, everything would have to go absolutely perfectly. And we know, in real life, that doesn't always happen," she said. "I would think that after the first of the year would be realistic."

She is confident, nonetheless, that a breakthrough is near.

"There are probably 300 vaccines under development out there, and they are using different strategies," she said.

"There are so many different approaches, I feel confident that at least one will work," she said.

Monday's interview was the latest in a series that Fleming has given news outlets recently.

Before arriving in Washington, he practiced medicine in Minden, La., roughly 50 miles south of Magnolia.

With the state line just 30 miles away, some of his patients were Arkansans, he said.

He immediately joined the task force, he said. Initially, it met daily. Now it convenes once or twice per week.

In addition to serving as an assistant to the president, Fleming is also a deputy chief of staff.

"It's been a good fit, I think, based on my background," he said.

Asked about Trump's initial claims that the virus would disappear "like a miracle," Fleming said little was known about covid-19 initially.

"The information was very contradictory. China was telling us everything was fine. The WHO, the World Health Organization, told us, 'Don't worry about anything.' We were getting input through our intelligence, people on the ground there, doctors, who were sounding the alarm. So we had people who were head of institutions telling us that this was nothing. It was a nothing-burger. And we had people on the ground who were quietly and secretly telling us that this was a very worrisome potential pandemic," he said.

Among U.S. experts, "even they were having difficulty ascertaining exactly the nature of this infection," he said.

"What you wouldn't want to do is to be an extreme alarmist and cause panic," he said.