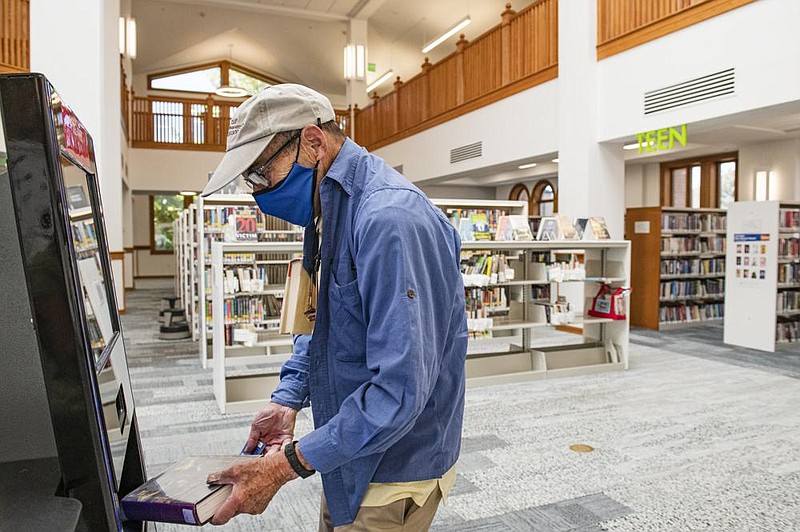 Lubert Stryer checks out two books Monday from the just re- opened Pitkin County Library in Aspen, Colo., where he jokingly told librarians that it was nice to find almost all of the books checked in. (AP/The Aspen Times/Kelsey Brunner)

WASHINGTON -- The Trump administration is hoping to capitalize on agreements to be signed this week between Israel, the United Arab Emirates and Bahrain by pressing for an end to a dispute that has roiled relations between the Gulf Arab countries.

Secretary of State Mike Pompeo said Monday that the U.S. is hopeful that Saudi Arabia and its regional allies will end a more than three-year blockade on neighboring Qatar that has persisted despite repeated U.S. calls for a resolution. Pompeo said it was particularly important to build on Arab-Israeli rapprochement to better confront increasing malign behavior from Iran.

"To keep our focus on this work and to close the door to increased Iranian meddling, it's past time to find a solution to the Gulf rift," Pompeo said. "The Trump administration is eager to see this dispute resolved and to open Qatar's air and land borders currently blocked by other Gulf states. I look forward to progress on this issue."

Pompeo made the comments at the opening of the U.S.-Qatar strategic dialogue at the State Department also attended by Treasury Secretary Stephen Mnuchin, Commerce Secretary Wilbur Ross and their Qatari counterparts. All of them also noted that Qatar is currently hosting peace talks between Afghanistan's warring sides.

CONYERS, Ga. -- A chemical fire shut down a major Atlanta-area interstate in both directions during the morning commute Monday, authorities said.

The fire at BioLab in Conyers led authorities to close an adjacent stretch of Interstate 20, though traffic was allowed through later in the morning, Conyers police Capt. Kim Lucas said. Conyers is about 30 miles southeast of Atlanta.

Lucas said the fire was contained, but the bigger concern was the smoke. BioLab has production and storage space for pool and spa water-treatment chemicals, the Atlanta Journal-Constitution, citing the company's website, said.

Rockdale County Fire Chief Dan Morgan said in a Facebook video the fire was small, but authorities had closed some manufacturing plants around BioLab. He said there was no danger to the community.

BAYTOWN, Texas -- A Texas police officer has been charged with assault in the fatal shooting of a woman after a struggle over the officer's stun gun last year, prosecutors announced Monday.

A Harris County grand jury indicted Baytown Officer Juan Delacruz Monday in the shooting of Pamela Turner in the parking lot of an apartment complex where they both lived in May 2019.

Delacruz was charged with aggravated assault by a public servant, a felony that could lead to a sentence of five years to life in prison if he's convicted. Prosecutors said he'll be given the chance to surrender.

Delacruz shot Turner after a struggle with the 44-year-old Black woman that a bystander captured on video. His attorney did not immediately respond to requests for comment.

The footage showed Delacruz standing over Turner and reaching down to try to grab her arms. Turner then yells, "I'm pregnant." Moments later, something flashes as she reaches her arm out toward the officer. Suddenly, Delacruz pulls away and fires five gunshots.

Police in the Houston suburb said the Hispanic officer shot Turner during an attempted arrest after she shocked him with his Taser.

Ben Crump, a lawyer for Turner's family, said last year that she was not pregnant but had been diagnosed with paranoid schizophrenia. He said Delacruz knew his neighbor suffered from mental illness and shot her from a "safe distance" away.

MADISON, Wis. -- The Wisconsin Supreme Court ordered Monday that the Green Party presidential candidate should not be added to the ballot, clearing the way for local clerks to resume mailing absentee ballots to more than 1 million voters who have requested one.

The 4-3 order comes just seven weeks before the Nov. 3 presidential election in this narrowly divided state. Democrats had feared that adding Howie Hawkins to the ballot would take votes away from Joe Biden and assist President Donald Trump. He won Wisconsin by fewer than 23,000 votes in 2016. 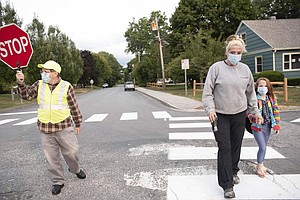 Photo by Sun Journal
Tara Burton and her daughter Kendra Woodworth cross the street Monday with the help of crossing guard Gordon Grant on their way to school in Auburn, Maine, for Kendra’s first day of first grade. (AP/Sun Journal/Andree Kehn)

Election officials had warned of significant delay and chaos had the court ordered Hawkins added to the ballot. That would have forced clerks to reprint and mail the ballots less than two months before the election.

Clerks had already mailed an untold number of ballots before the Supreme Court on Sept. 10 stopped the sending of ballots while it considered the Green Party lawsuit.

Democrats feared a delay in creating and then sending out replacement ballots will confuse voters and dampen turnout. The ruling comes just ahead of a state deadline to send absentee ballots by Thursday to people who have a request on file will not be met.