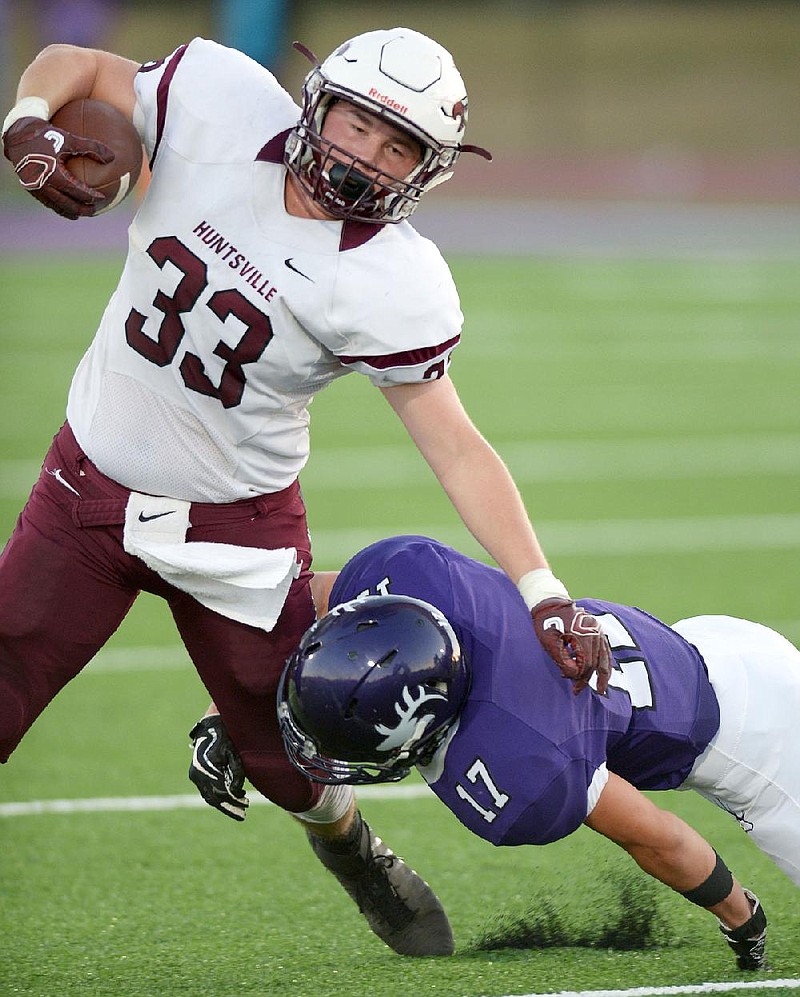 Slayter Watkins is a 210-pound running back who picks up tough, inside yards for the Huntsville Eagles, but he also possesses some deceptive speed when he slips into the secondary.

Just ask the Lincoln Wolves, who fell 35-14 to Huntsville on Friday night.

Williams rushed for four touchdowns and 247 yards as Huntsville won back-to-back games for the first time since 2018. Williams, who also rotates at linebacker for the Eagles, scored from 7 and 5 yards out. But he also had enough speed and stamina to outrun Lincoln defenders on 68- and 82-yard touchdown runs.

For his effort, Watkins is the Northwest Arkansas Democrat-Gazette Player of the Week.

“Slayter is our workhorse and team captain,” Huntsville coach Matt Williams said of Watkins, a three-year starter as a senior. “He’s got that confidence and swagger about him. He’s a big load to bring down but he has that deceptive speed and he outran some people when it looked like that had the angle on him.”

Watkins is playing less at linebacker this season after he was made the featured back for Huntsville (2-1), which lost to Lamar before posting consecutive wins over Clinton and Lincoln. Watkins caught a 45-yard touchdown pass and scored on an 80-yard touchdown run against Clinton before surprising Lincoln with touchdown runs of 68 and 82 yards.

“I’m not exactly the slow type,” said Watkins, who ran for nearly 700 yards as a junior. “I can read where a defender is going and then react to that.”

The 38-0 win over Clinton snapped a nine-game losing streak for the Eagles, who will have a week off before beginning 4A-1 Conference play at Gentry on Sept. 25. Huntsville is determined to put together a winning season after competing against larger schools in the 5A-West Conference.

“We’re used to people putting us down,” Watkins said. “But this is the year we’re going to ball and make a name for ourselves. We’re playing for that name on our jerseys.”