Trump, Biden at odds on climate's role in wildfires

by JONATHAN LEMIRE, AAMER MADHANI, WILL WEISSERT AND ELLEN KNICKMEYER THE ASSOCIATED PRESS | September 15, 2020 at 4:00 a.m. 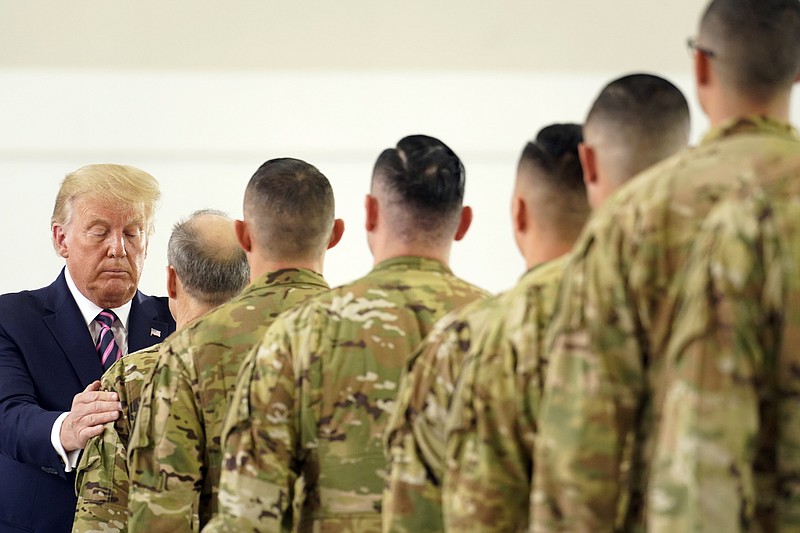 SACRAMENTO, Calif. -- With the smell of California wildfires in the air, President Donald Trump on Monday ignored the scientific consensus that climate change is playing a central role in historic West Coast infernos and renewed his claim that failure to rake forest floors and clear dead timber is mostly to blame.

The fires are threatening to become another front in Trump's reelection bid, which is already facing hurdles because of the coronavirus pandemic, joblessness and social unrest.

His Democratic challenger, Joe Biden, in his own speech Monday said the destruction and mounting death toll across California, Oregon and Washington require stronger presidential leadership. He labeled Trump a "climate arsonist."

[Video not showing up above? Click here to view » https://www.youtube.com/watch?v=EENlJXCzM7s]

Trump traveled to Northern California to be briefed by Democratic Gov. Gavin Newsom and other state and federal officials. At one point, state Natural Resources Agency Secretary Wade Crowfoot urged the president to "recognize the changing climate and what it means to our forests."

"If we ignore that science and sort of put our head in the sand and think it's all about vegetation management, we're not going to succeed together protecting Californians," Crowfoot added.

Trump responded, "It will start getting cooler, just you watch."

Crowfoot pushed back that he wished the science agreed with the president. Trump countered, "I don't think science knows, actually."

That moment came on a day of dueling campaign events, with Trump and Biden dramatically contrasting their outlooks on climate change -- and the effect it has had on the record-setting fires ravaging the West Coast.

Trump's suggestion that the planet is going to start to unexpectedly cool is at odds with reality, experts say.

"Maybe there is a parallel universe where a pot on the stove with the burner turned to high 'starts getting cooler.' But that is not our universe," said Stanford University climate scientist Chris Field.

Biden lashed at Trump, saying the moment requires "leadership, not scapegoating" and that "it's clear we are not safe in Donald Trump's America."

"This is another crisis, another crisis he won't take responsibility for," Biden said. He said that if voters give "a climate denier" another four years in the White House, "why would we be surprised that we have more of America ablaze?"

Trump, who was briefed during a stop near Sacramento before a campaign visit to Phoenix, has been mostly quiet as the catastrophe on the West Coast has unfolded over the past few weeks. He tweeted appreciation for firefighters and emergency responders Friday in the first public comments he had made in weeks about the fires that have killed dozens of people, burned millions of acres and forced thousands from their homes.

The president arrived at Sacramento McClellan Airport to the powerful scent of smoke from the fires burning some 90 miles away.

He contended anew that Democratic state leaders are to blame for failing to rake leaves and clear dead timber from forest floors. Trump offered no evidence to support his claim, and wildfire experts and forest managers say raking leaves makes no sense for vast areas of U.S. wilderness and forests. And many of the blazes have roared through coastal chaparral and grasslands, not forest.

"It's often hard to know what Trump means," Balch added. "If by forest management he means clear-cutting, that's absolutely the wrong solution to this problem. ... There's no way we're going to log our way out of this fire problem."

Biden, who gave his climate speech in Delaware on Monday, released a $2 trillion plan in July to boost investment in clean energy and stop all climate-damaging emissions from U.S. power plants by 2035.

But as the wildfires rage, some climate activists have expressed frustration that Biden has not been more forceful on the issue. For instance, he has not embraced some elements of the Green New Deal.

To that end, Biden in his address did not wade into political and policy disagreements among Democrats, liberal activists and even some Republicans who acknowledge the climate crisis. As he has before, Biden sought to frame his energy proposals as an immediate necessity and a long-term economic boon focusing more on new jobs and a cleaner economy that would offset any initial costs.

"Donald Trump's climate denial may not have caused these fires and hurricanes," Biden said. "But if he gets a second term, these hellish events will continue to become more common and more devastating and more deadly."

Trump visited McClellan Park, a former U.S. Air Force Base about 10 miles outside Sacramento that is used by firefighters as a staging area for large aircraft used in combating blazes. Most of the largest firefighting aircraft have not been utilized in recent days as heavy smoke limits visibility.

Biden's running mate, Sen. Kamala Harris of California, will return to her home state today to meet with emergency service personnel and be briefed on the state's wildfires.

Gallery: Trump and Biden weigh in on wildfires

After the publication of the Intergovernmental Panel on Climate Change report concluded that climate change would hurt the economy, Trump said he read it but didn't believe it. In September 2019, he falsely slammed the Green New Deal as an effort that would lead to "No more cows. No more planes. ... No more people, right?"

Climate scientists say rising heat and worsening droughts in California consistent with climate change have expanded what had been the state's autumn wildfire season to a year-round concern, sparking bigger, deadlier and more frequent fires.

All five of the state's largest fires on record have raged in the past three years, including the deadliest fire, a 2018 blaze that killed 85 people when it swept through the town of Paradise on the slopes of the Sierra Nevada. Trump during his Monday visit awarded seven members of the California National Guard the Distinguished Flying Cross for the rescue of dozens of Californians during the 2018 Paradise fire.

An analysis released in August from Stanford climate and wildfire researcher Michael Goss and others found that a nearly 2-degree rise in autumn temperatures and 30% drop in rainfall has more than doubled the number of autumn days with extreme fire weather over the past 40 years.

​​​​​Information for this article was contributed by Bill Barrow, Juliet Williams and Seth Borenstein of The Associated Press. 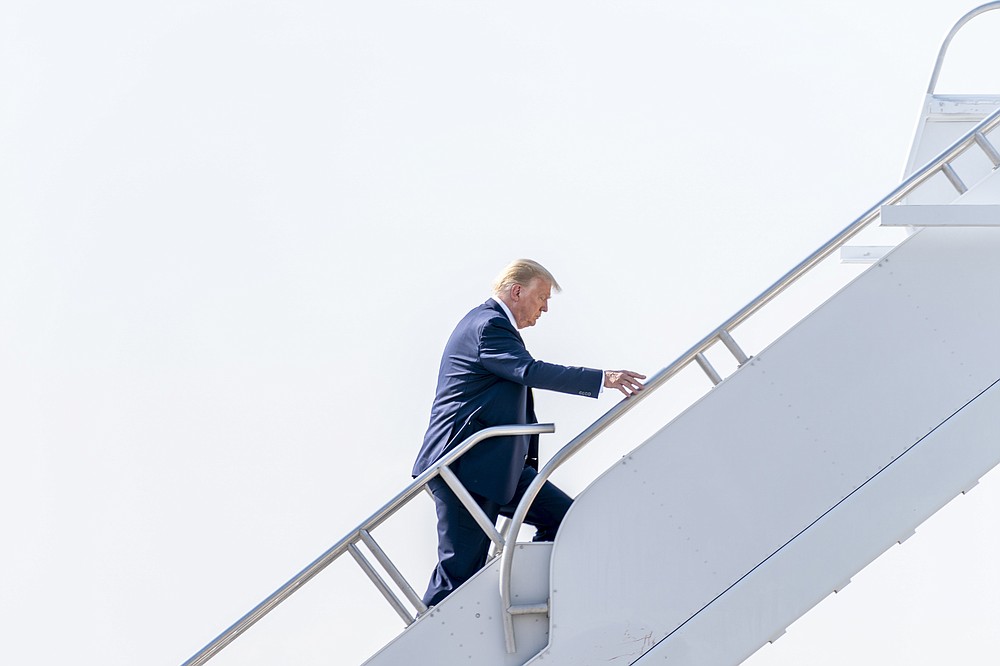 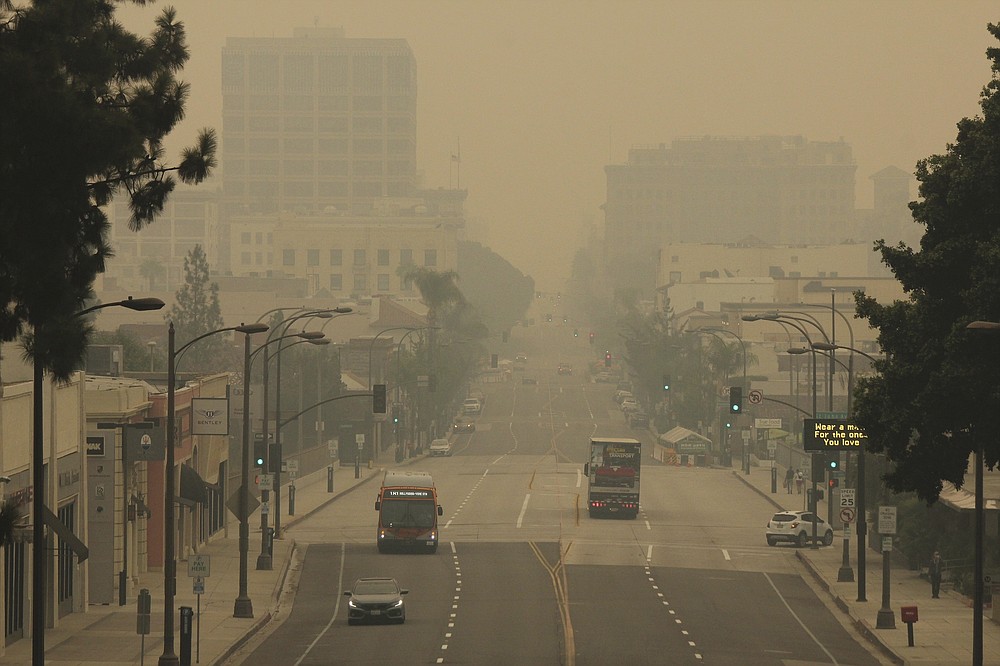 FILE - Smoke from wildfires fills the sky over Pasadena, Calif., in this view looking east down Colorado Boulevard in a Saturday, Sept. 12, 2020 file photo. The fires consuming the forests of California and Oregon and darkening the skies over San Francisco and Portland are also damaging an economy already struggling with the coronavirus outbreak. In the communities where they are raging, wildfires are destroying property, running up huge losses for property insurers and putting a strain on economic activity that could linger for a year or more. (AP Photo/John Antczak, File) 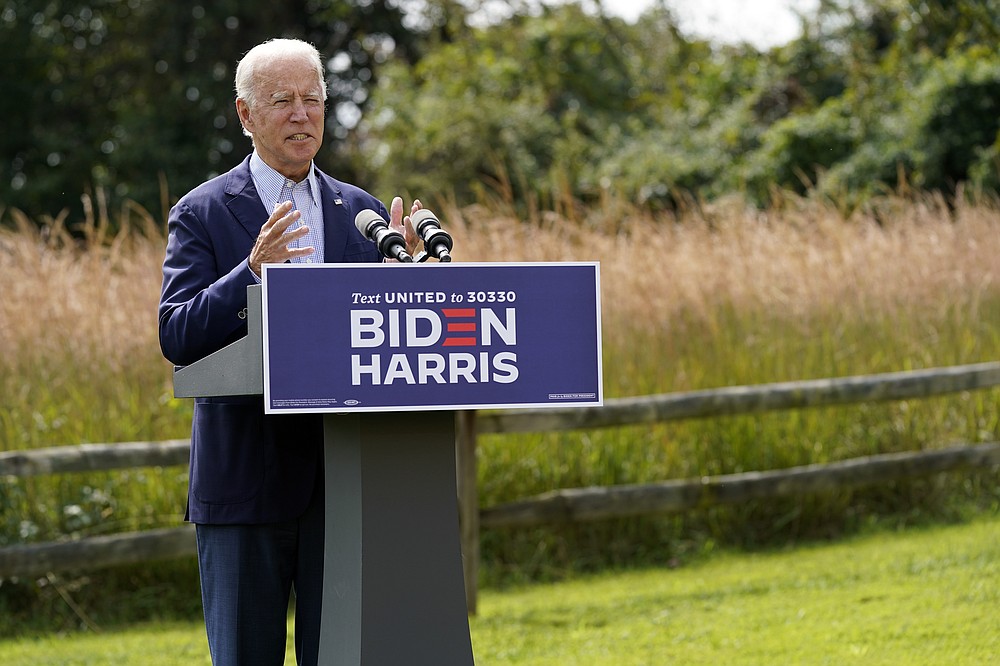 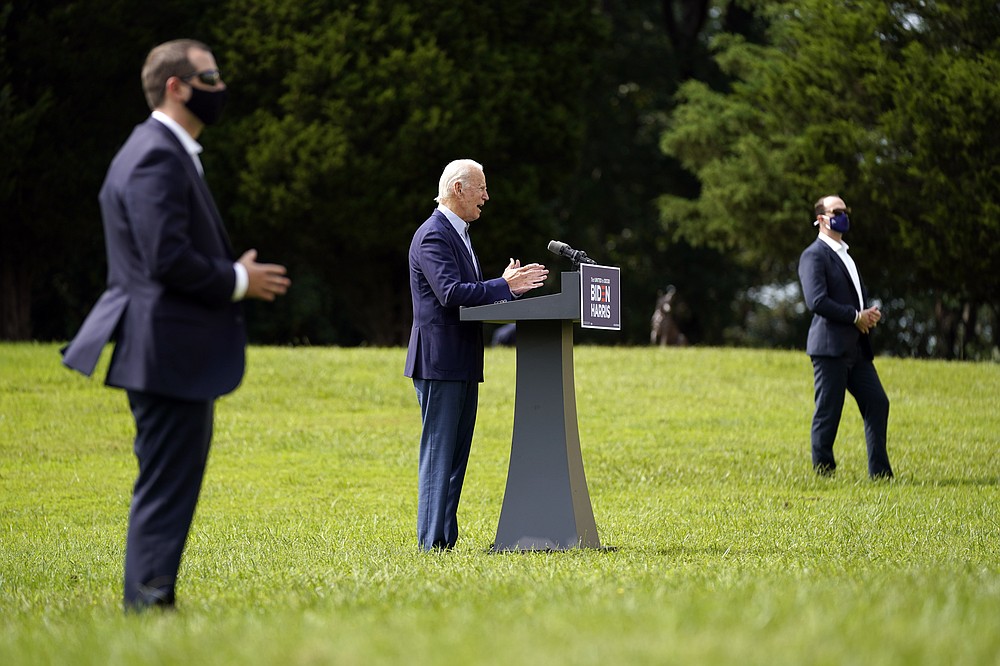 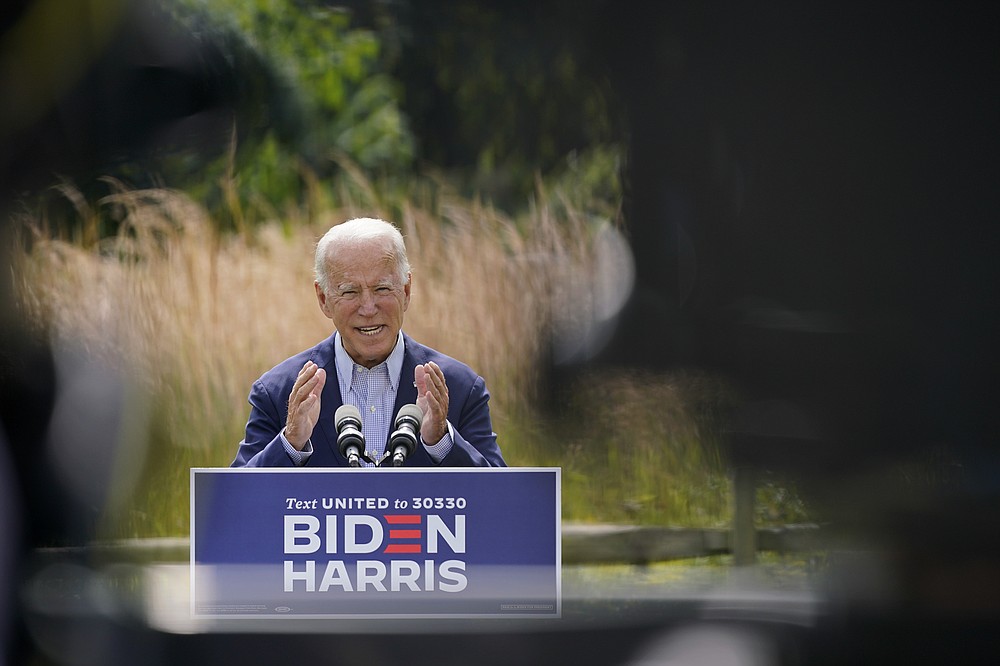 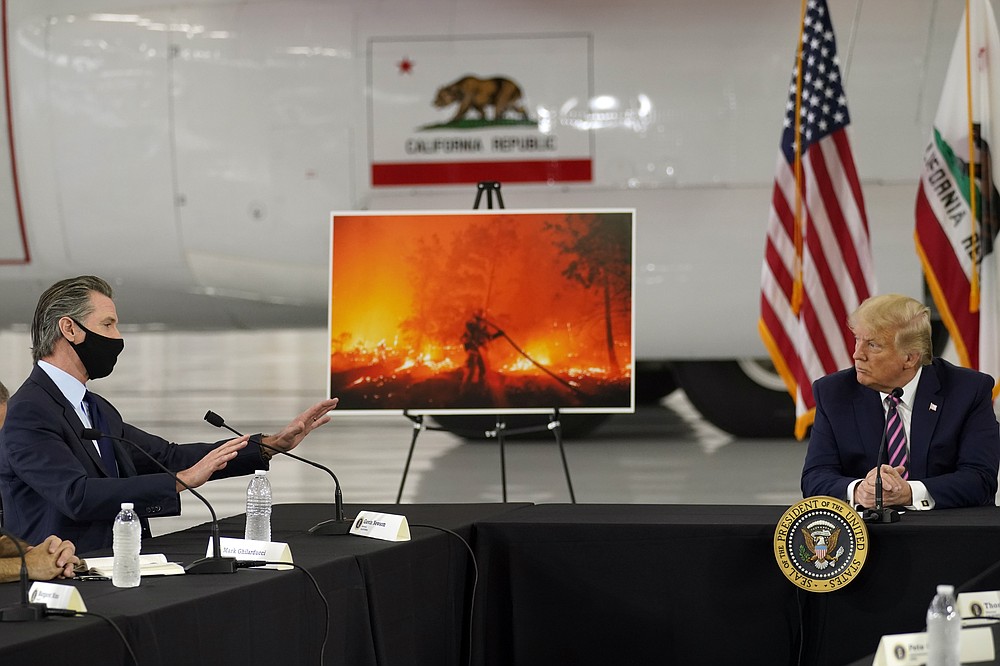 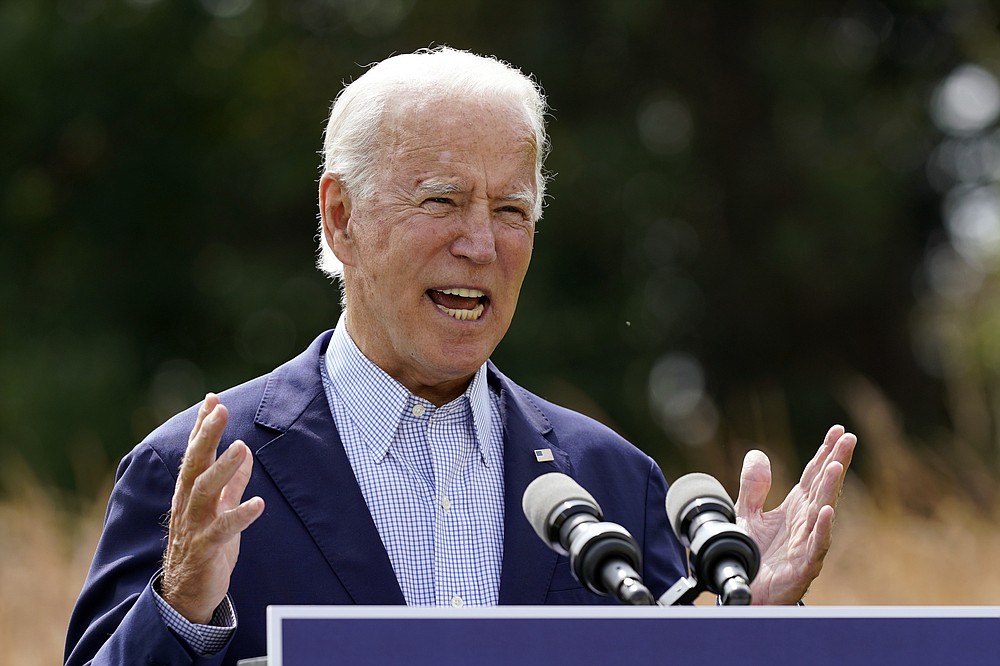 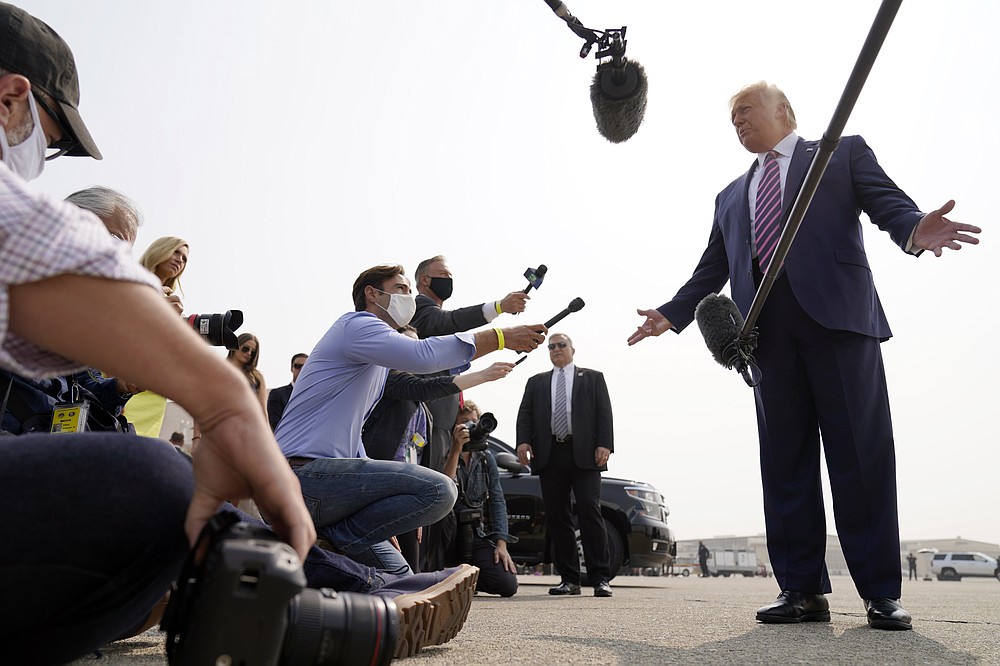 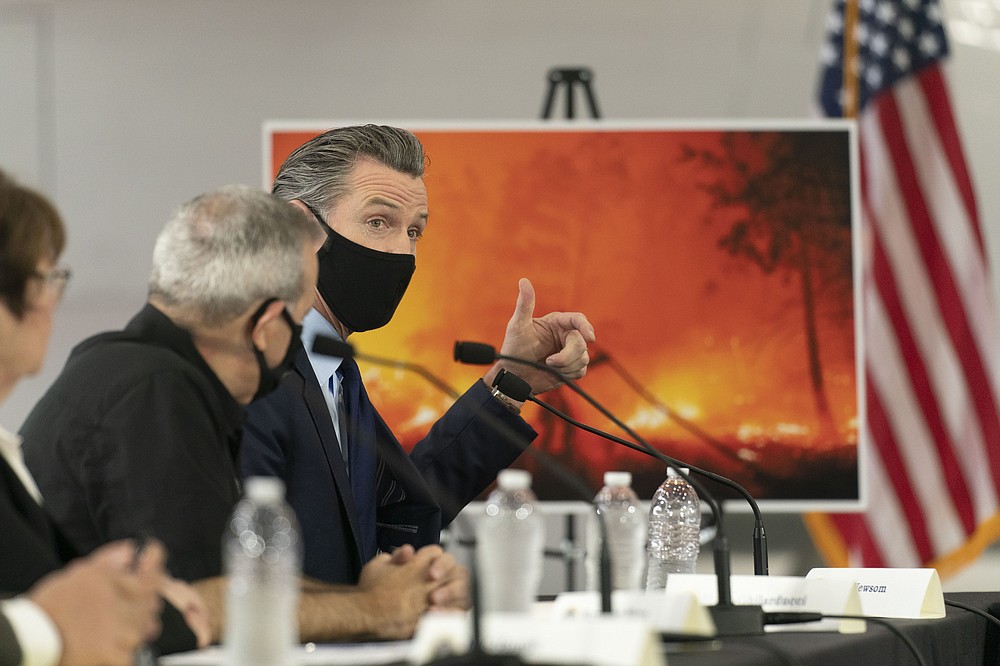