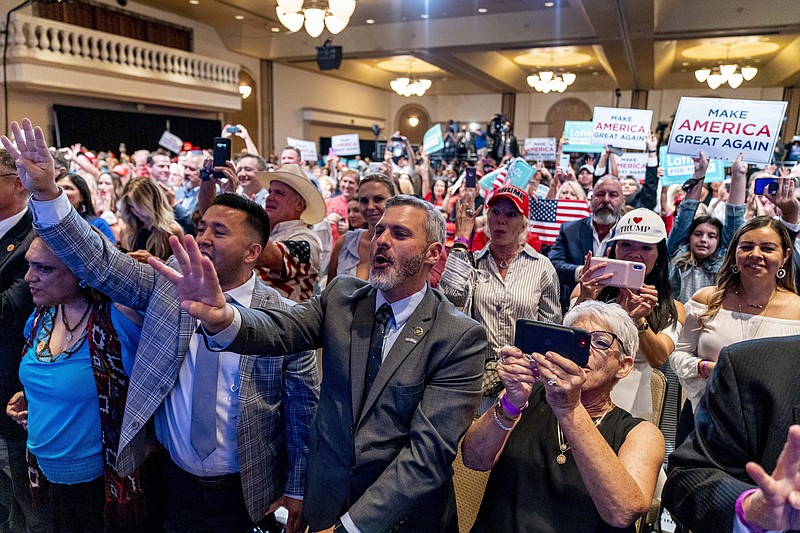 WASHINGTON -- President Donald Trump is running as the "law and order" candidate, but he and his campaign have openly defied state emergency orders and flouted his administration's coronavirus guidelines as he holds growing rallies in battleground states.

Democratic governors and local leaders have urged the president to reconsider the events, saying he's putting lives at risk. But they largely have not tried to block the gatherings of thousands of people, which Trump and his team deem "peaceful protests" protected by the First Amendment.

"If you can join tens of thousands of people protesting in the streets, gamble in a casino, or burn down small businesses in riots, you can gather peacefully under the 1st Amendment to hear from the President of the United States," Tim Murtaugh, a Trump campaign spokesman, said in a statement.

On Sunday night, the president pitched his indoor campaign rally in Henderson, Nev., as a form of entertainment.

"What do we have?" Trump asked, telling everyone to settle in and get comfortable for the evening. "Football's boring as hell."

[Video not showing up above? Click here to view » https://www.youtube.com/watch?v=-km2IHCDNgE]

The president defended holding an indoor rally despite the pandemic, telling the Las Vegas Review-Journal that he wasn't personally in any danger. "I'm on a stage, and it's very far away," Trump said. "And so I'm not at all concerned."

In interviews, several attendees scoffed at the idea that there was any personal risk involved in the crowded, indoor event. Some called the coronavirus a hoax, and one man wore a T-shirt that announced: "Social-ism distancing."

Another Trump supporter outside the venue held a sign shaped like the president's head painted with the message: "Media is the virus." Hundreds who could not get inside stood on big-rig trucks to watch Trump's speech on a Jumbotron.

Trump's refusal to abide by health guidelines -- even those crafted by his own administration -- underscores the extent to which he believes projecting an image of normalcy is vital to winning in November, even as the country approaches 200,000 deaths from covid-19.

The president has tried to use this summer's mass protests over racial injustice and police misconduct as a defense for his rallies, making the case that, if demonstrators can gather en masse, so can his supporters. So far, Democratic governors have declined to stand in his way.

Trump's campaign insisted that it takes appropriate health precautions, including handing out masks and hand sanitizer and checking the temperatures of rallygoers.

But images of thousands of maskless supporters standing shoulder to shoulder remain jarring in a country where sports are still played in empty arenas and concerts have been largely banned. That's especially true for those who have lost loved ones or spent months isolating at home and who worry that rallies will further spread infection. An indoor rally that Trump held in Tulsa in June was blamed for a surge of virus infections there.

Trump's rally at the Xtreme Manufacturing facility in Henderson on Sunday night packed thousands of supporters into a warehouse space despite the fact that the state restricts gatherings to 50 people -- based on White House reopening guidelines. Relatively few people wore masks.

"This is an insult to every Nevadan who has followed the directives, made sacrifices and put their neighbors before themselves," said Nevada Gov. Steve Sisolak, a Democrat.

Onstage, Trump called Sisolak a "hack" and told his supporters, "If the governor comes after you, which he shouldn't be doing, I'll be with you all the way."

The city on Monday announced that it was fining Xtreme Manufacturing $3,000. Sisolak slammed the rally as "shameful, dangerous and irresponsible." But it does not appear the governor would try to prevent a replay. If Trump returns to the state for another rally, said covid-19 response director Caleb Cage, state officials will continue to encourage his campaign to follow state law and directives.

In some other states, the rallies are legal. In North Carolina, an order signed by Democratic Gov. Roy Cooper limits outdoor gatherings to 50 people and mandates masks in public, but "activities constituting the exercise of First Amendment rights" are exempt.

The state's top public health official, Dr. Mandy Cohen, played down calls for stricter enforcement last week as she criticized Trump for holding a rally at the Winston-Salem airport, where thousands of supporters crammed together without masks.

"This isn't really about mandates and enforcement. It's about leadership," Cohen told reporters.

"By using the First Amendment exemption for mass gatherings under the governor's executive order in this way, they're making it much harder for North Carolina to get our children back in school and people back to work safely," said Dory MacMillan, a spokesperson for Cooper.

In Michigan, political speech is exempt from Democratic Gov. Gretchen Whitmer's order limiting the size of outdoor gatherings. And while Whitmer's office issued a memo saying people engaging in First Amendment activities still must adhere to social distancing measures, the state hasn't moved to enforce the rules at Trump's rallies or during protests.

"We hope the president would care enough about his supporters and their friends and families that he would encourage social distancing and mask wearing," said Ryan Jarvi, a spokesperson for Democratic Attorney General Dana Nessel.

Nevada is actually one state where Trump has encountered resistance. His campaign had originally planned to hold a pair of rallies over the weekend in Las Vegas and Reno, but those plans were scuttled after the Reno-Tahoe Airport Authority warned one of the hosts that the rally would violate the governor's restrictions and the terms of the company's lease. Trump's campaign immediately moved to blame Sisolak for the pushback, but the governor's office insisted it had no involvement.

Trump told the Las Vegas Review-Journal that "he did not believe he was subject" to the order and blamed Sisolak for forcing him to abandon plans for those outdoor rallies.

Rallies set for Wisconsin on Thursday and Minnesota on Friday will be held in open-air airplane hangars, and neither state caps attendance on outdoor events, even though covid-19 cases have been surging in Wisconsin.

Ashley Mukasa, a spokesperson for the Winnebago County Health Department, said the Wisconsin county doesn't have any ordinances that would allow it to issue or enforce local health orders. However, the agency briefed Trump's advance team about the statewide mask mandate, she said. "They wanted to avoid breaking any laws," Mukasa said.

In Minnesota, where Democratic Gov. Tim Walz has long been reluctant to spar publicly with Trump, the virus order exempts anything that would limit "the movement of federal officials in Minnesota while acting in their official capacity." Beltrami County's public health director, Cynthia Borgen, said the state's health department had decided the president's visit would fall under that exemption, even though he will be there to campaign.

Trump on Monday again drew hundreds of supporters to an indoor event in Phoenix that his campaign advertised as a "Latinos for Trump roundtable."

"This is supposed to be a roundtable, but it looks like a rally," he told the crowd.

Most in the audience did not wear masks, though tables filled with hundreds of masks were at the entrance to the event.

Arizona Gov. Doug Ducey, a Republican, has consistently refused to criticize Trump for holding large gatherings in the state, including a packed campaign event at a Phoenix church in June, when Arizona was seeing a surge in coronavirus cases.

"The constitutional rights of Arizonans are going to be protected," Ducey said. "They've been protected the entire time. They're nonnegotiable."

• A House subcommittee is launching an investigation into whether political appointees have meddled with routine government scientific data to better align with the president's statements about the pandemic, after a report that one such appointee claimed scientists were trying to undermine Trump.

The Democrat-led panel said it is requesting transcribed interviews with seven officials from the Centers for Disease Control and Prevention and the Department of Health and Human Services, including communications aide Michael Caputo. Caputo has often publicly pushed back on CDC statements about the coronavirus and said falsely in a Facebook video Sunday that the agency has a "resistance unit" against Trump, according to The New York Times.

• Two of France's biggest cities, with infection rates rising even faster than the national surge in new cases, are tightening limits on public activities as the government seeks to ward off a new nationwide lockdown. The new restrictions in Marseille and Bordeaux were demanded by the prime minister, who said the cities were putting pressure on regional health services.

• British scientists are beginning a small study comparing how two experimental vaccines might work when they are inhaled instead of being injected. Researchers at Imperial College London and Oxford University said a trial involving 30 people would test vaccines developed by both institutions when participants inhale the droplets in their mouths, which would directly target their respiratory systems.

• South Carolina Lt. Gov. Pamela Evette was diagnosed with covid-19 on Friday and is recovering in isolation with her family at home, state officials said. Her positive test prompted Gov. Henry McMaster and his wife to get tests, which came back negative. 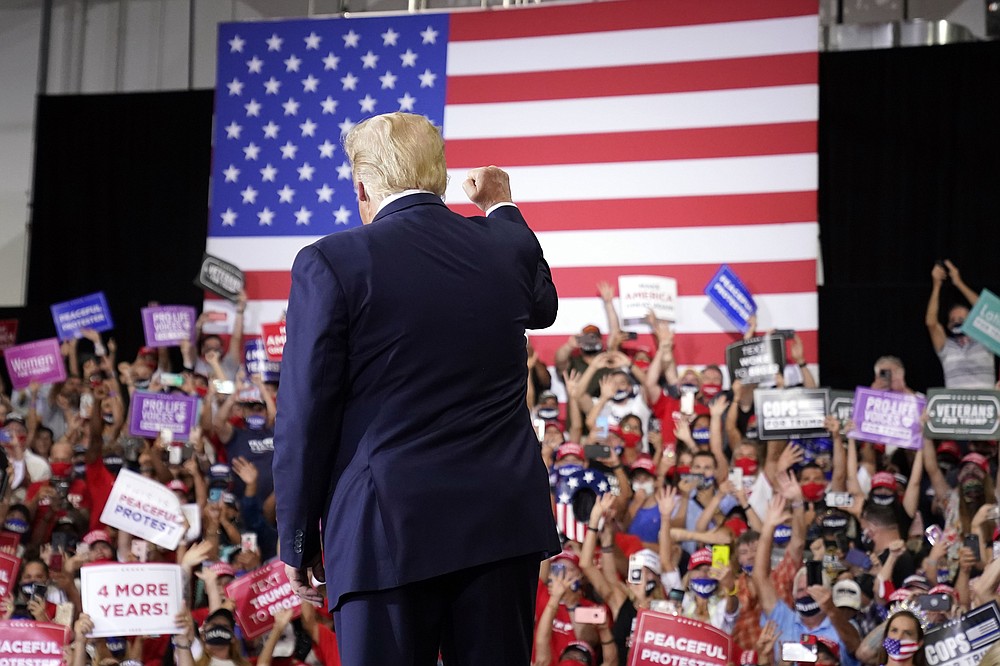 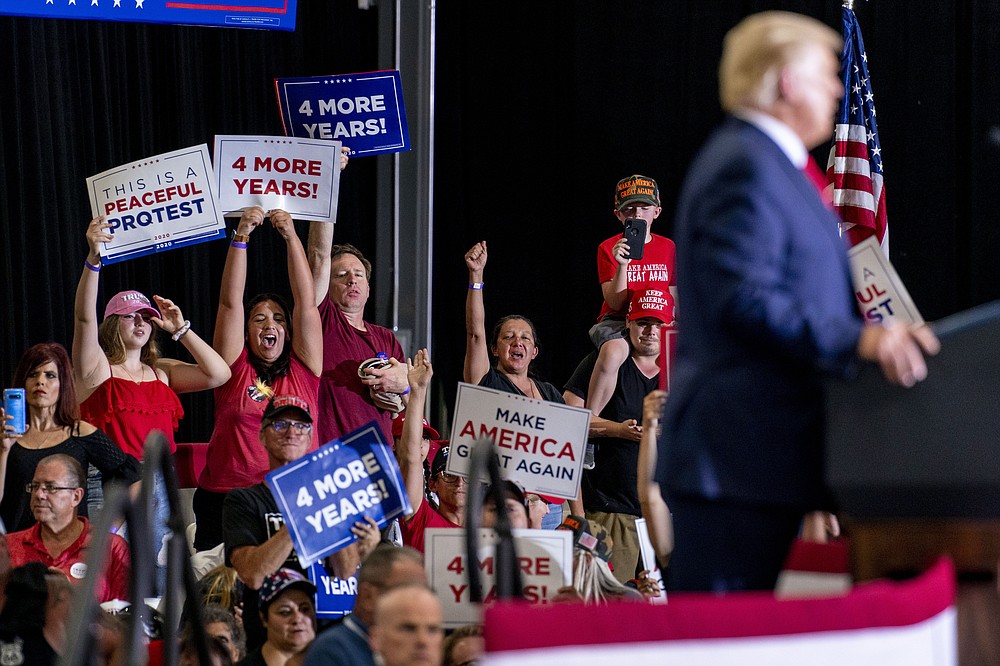 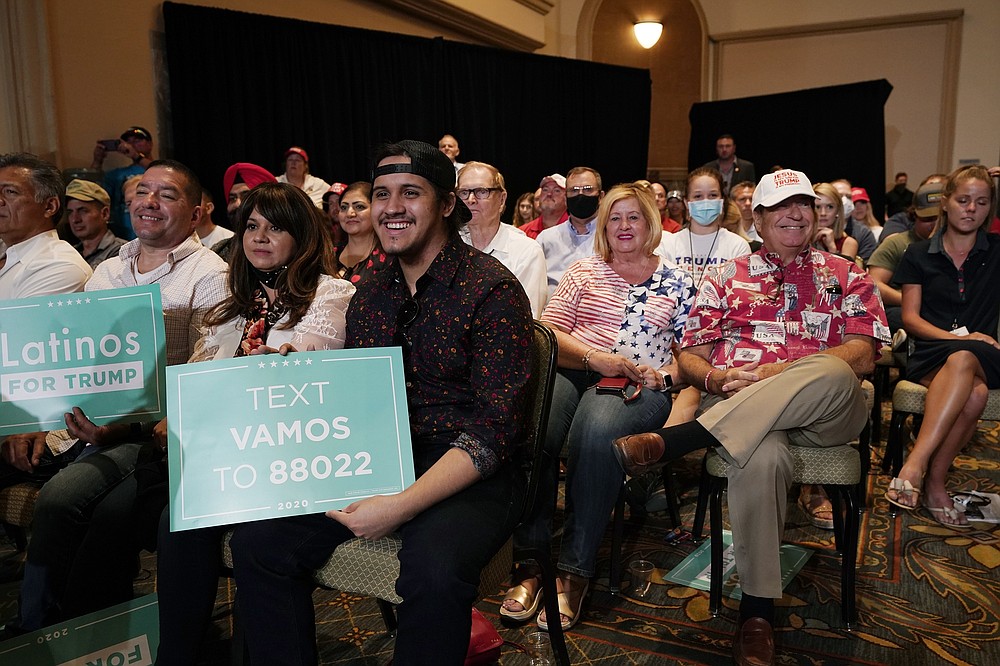 The crowd listens to President Donald Trump speak as he participates in a Latinos for Trump Coalition roundtable Monday, Sept. 14, 2020, in Phoenix. (AP Photo/Ross D. Franklin) 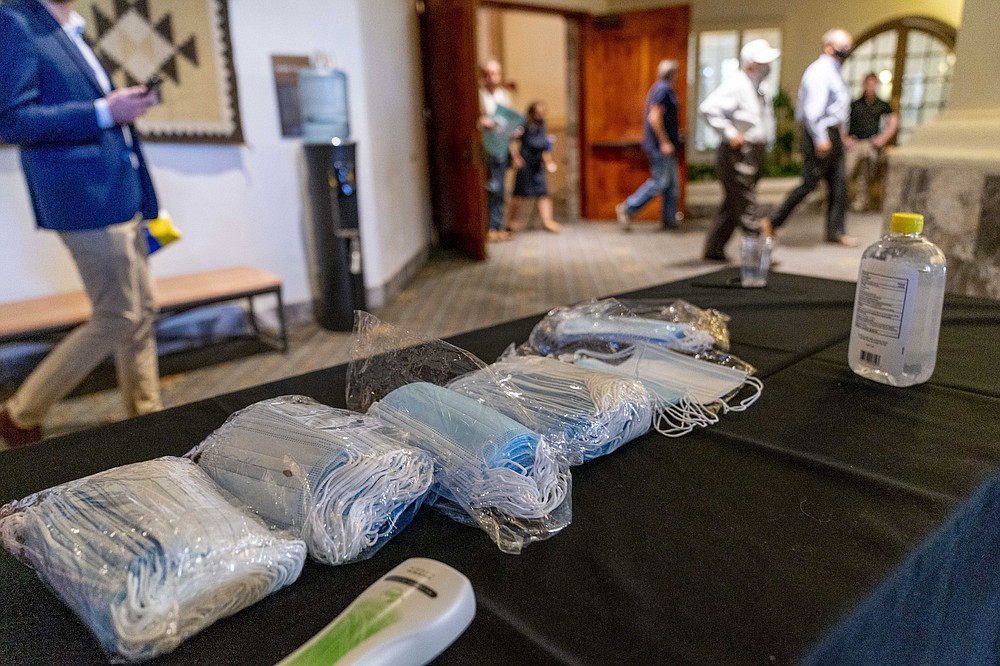