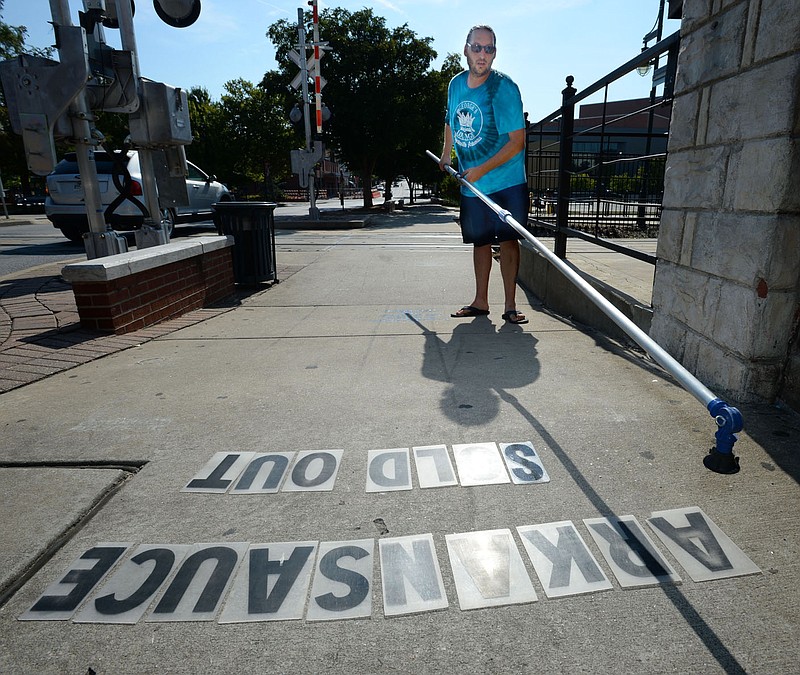 Jarrod Hunt picks up letters from the sidewalk Aug. 6 as he changes the marquee outside George’s Majestic Lounge on Dickson Street in Fayetteville, just before the venue’s first live performance held after closing because of the pandemic. The City Council approved leasing land to the south for an outdoor stage. (File photo/NWA Democrat-Gazette/Andy Shupe)

FAYETTEVILLE — Downtown got another spot for live music, albeit a very small one.

The City Council voted 8-0 Tuesday to lease a space for an outdoor stage on a nearly 1,700-square-foot piece of land immediately south of George’s Majestic Lounge. A 24-foot by 30-foot section will be leased to a limited liability company under Brian and Day Crowne, owners of George’s.

The leased area is just enough for a stage and doesn’t touch other parts of the land with trees, drainage features or sidewalk. Any amplified music must end at 11 p.m. daily.

The city will lease the land for five years, with an option to renew on each of those five years. The rent is $50 per month.

Brian Crowne said he saw the move as a bridge measure to provide live music in a safe environment during the pandemic. However, the plan is to continue some type of programming outside after the pandemic has subsided, possibly in the form of festival-type events, he said. George’s will continue to have its main operation indoors.

“It doesn’t guarantee that we’re going to be solvent, but it gives us a chance to try something different,” Crowne said.

George’s has been putting on weekend shows outside at its parking lot immediately west of the building to get some revenue during the pandemic. Several years ago, complaints from neighbors about loud music resulted in the city’s current noise ordinance and the venue’s outdoor space being enclosed. Crowne said he has intimate knowledge of the ordinance and has no intention of violating it.

The land sits adjacent to what will become the civic space of the cultural arts corridor downtown. Councilman Matthew Petty sponsored the measure, saying it wasn’t about a bottom-line offer on the land but a need to respond during the pandemic.

“This is decisive and fast,” he said. “That doesn’t necessarily mean not transparent. We’re doing this in the light of day, and we’re actually debating it quite a bit.”

The council discussed possibly selling the land to the Crownes during its Sept. 1 meeting before opting to lease. Members also took a tour of the property Monday.

Craig Underwood of Underwood’s Fine Jewelers said he felt the process over leasing the land was unfair but supported the Crownes and wished George’s success. Underwood offered $25,000 on the property a few years ago when the Crownes simultaneously had offered $17,000, but the council never went through with a deal.

In other business, the council approved 8-0 an agreement with Northwest Arkansas Trailblazers to build a mostly soft-surface trail loop near the University of Arkansas campus.

The Fayetteville Traverse Trail will reach from Markham Hill west of campus, west to Centennial Park, south to Kessler Mountain, east to Cato Springs Road and north back to campus.

The project is made possible through a grant from the Walton Family Foundation and comes at no cost to the city. The Trailblazers also offered to maintain the trail for 1½ years.

The entire loop will be 15 to 20 miles and could take up to 10 years to complete. It will be built in sections, Park Planning Superintendent Ted Jack said.

The council also indefinitely tabled a measure that would have halted landlords from collecting fees associated with late payment of rent during the pandemic. City Attorney Kit Williams said the move likely would have violated state law.

• A $90,400 contract to head a branding effort for the cultural arts corridor downtown, including development of a formal name for the project. Public engagement will be part of the process.

• Rezoning nearly 2 acres on the east side of School Avenue, south of Cato Springs Road, for a new fire substation.

• Rezoning about 7 acres south of Wedington Drive between 54th and 51st avenues from agricultural use to a mix of residential and commercial.