No changes expected as policymakers set to unveil quarterly projections by COMPILED BY DEMOCRAT-GAZETTE STAFF FROM WIRE REPORTS | September 16, 2020 at 2:17 a.m. 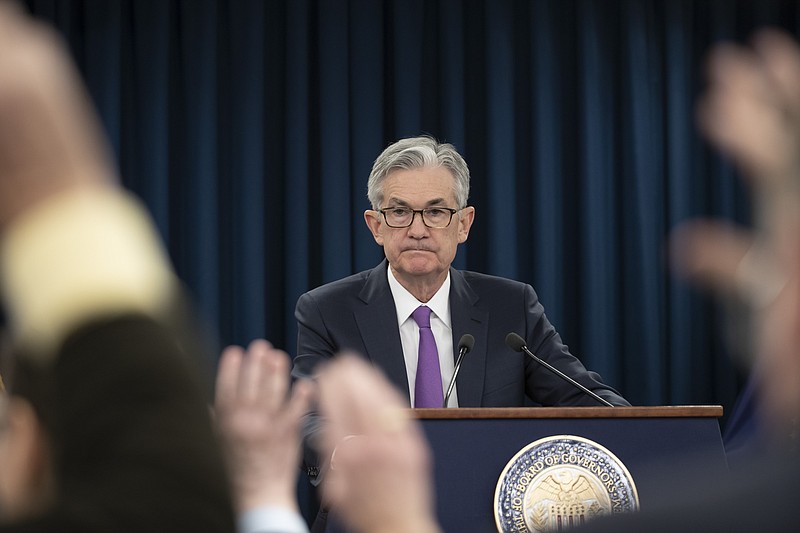 FILE - In this Jan. 30, 2019, file photo, Federal Reserve Chairman Jerome Powell waits for a question from a reporter at a news conference in Washington. Federal Reserve policymakers will meet for two days beginning Tuesday, Sept. 15, 2020, for the first time since they significantly revised the Fed’s operating framework in ways that will likely keep short-term interest rates near zero for years to come. (AP Photo/Alex Brandon, File)

WASHINGTON -- Federal Reserve policymakers are meeting this week for the first time since they significantly revised the Fed's operating framework in ways that will likely keep short-term interest rates near zero for years to come.

As a result, analysts expect the Fed will keep its benchmark rate unchanged after the two-day meeting that ends today. It has been pegged at nearly zero since March after the pandemic and the measures taken to contain it essentially shut down the economy.

But the statement that Fed policymakers release today is expected to contain revisions that reflect the sweeping changes that Fed Chairman Jerome Powell announced late last month in how the central bank operates. The Fed will also issue its quarterly economic projections, which will for the first time include estimates for growth, unemployment and the Fed's benchmark interest rate for 2023.

In one key shift, the Fed will no longer follow its longtime practice of raising its benchmark interest rate simply because the unemployment rate has fallen to a low level that could spur inflation. Instead, it will wait for actual evidence that prices are rising. That reflects a view among some high-ranking Fed officials that economic models it has used in the past no longer accurately reflect how the economy works.

Instead, low unemployment and even rising wages no longer necessarily push up inflation, Fed officials believe. With most consumers and businesses accustomed to mild price increases, they have adjusted their behavior in ways that act to keep inflation low. Businesses, for example, facing increased global competition are less likely to pass on higher labor costs to customers.

Meanwhile, a Republican senator on Tuesday said conservative economist Judy Shelton does not have the votes in the Senate to be confirmed to a seat on the Federal Reserve Board, raising the political stakes regarding President Donald Trump's nominee.

"We're still working it," said John Thune, R-S.D., who holds the No. 2 position in the Senate Republican leadership. "She's a priority for the White House. It's the Federal Reserve. It's important, so obviously we want to get it done. But we're not going to bring it up until we have the votes to confirm her."

Shelton narrowly made it through the Senate Banking Committee this summer after a 13-to-12 vote along party lines. Earlier in the year, some Republicans on the panel expressed concerns about Shelton's views on the Fed's independence and monetary policy.

In past remarks and writings, Shelton has said the Fed harnesses too much power and should be reined in. She has also called for a return to the long-abandoned gold standard, and her critics say her views make her too much of an outlier.

Information for this article was contributed by Christopher Rugaber of The Associated Press and by Rachel Siegel of The Washington Post.