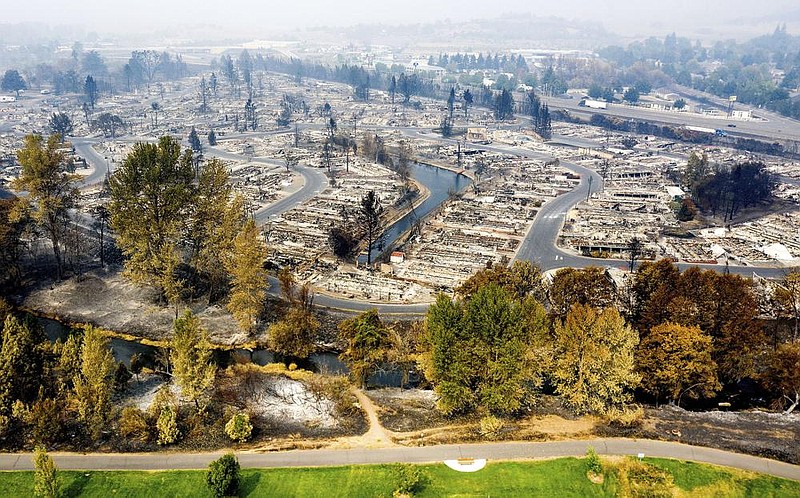 This drone image taken Tuesday shows homes leveled by wildfire at Bear Lake Estates in Phoenix, Ore. The entire state is under a smoke advisory through Thursday. More photos at arkansasonline.com/916smoke/. (AP/Noah Berger)

The wildfires raging on the West Coast became an all but inescapable crisis around the country Tuesday, with dozens dead in three states, fires and evacuations starting in Idaho, milky smoke clouding the skies over Michigan, and haze reaching as far as New York City.

In the states where the fires are burning worst -- with more than 5 million acres charred so far in Oregon, California and Washington state -- authorities were trying to adapt to a disaster with no clear end in sight, under conditions that many believe are exacerbated by climate change and poor forest management.

The Bay Area, under a blanket of smoke for four weeks, set another record for consecutive warnings about hazardous air. The Oregon State Police established a mobile morgue as teams searched incinerated buildings for survivors and the dead.

[Video not showing up above? Click here to view » https://www.youtube.com/watch?v=4RDQoeaf5aY]

Alaska Airlines suspended flights out of Portland, Ore., and Spokane, Wash., citing "thick smoke and haze." And Gov. Kate Brown of Oregon requested a presidential disaster declaration, saying late Monday, "to fight fires of this scale, we need all the help we can get."

In Oregon, tens of thousands of people were still under evacuation orders, and the Beachie Creek fire, east of Salem, grew to burn almost 200,000 acres.

With dozens of fires burning through millions of acres in Oregon and California, meteorologists are keeping watch on how the winds and humidity could affect efforts to battle them. While strong wind gusts are still possible, forecasters said that regions with some of the most destructive fires would benefit from gentler winds Tuesday.

Nearly three dozen fires have burned through more than 950,000 acres in Oregon. In California, the North Complex fire of more than 264,000 acres has been 39% contained.

On Tuesday, winds were expected to ease but smoke and haze will continue to blanket the sky over Northern California, the National Weather Service said. Temperatures will waver between the low 70s to mid-80s in the valley and the North Complex fire region.

"There won't be much wind over that fire area today," Jim Mathews, a National Weather Service meteorologist said Tuesday. "I don't think there would be adverse conditions."

Humidity will be in the teens to low 20s, he said.

"We should see an improvement," Mathews added. "More sunshine will be filtering through the smoke, and that is due to the southwest flow beginning to stir the atmosphere. But the air quality is still forecast to be unhealthy."

In Oregon, a "red flag" warning of dangerous fire conditions remained in effect east of the Cascades, and there was little moisture in the air. But most of the larger fires in the state are burning west of the mountains, and the firefighters battling them were expected to be spared the higher winds.

In Idaho, hundreds of firefighters continue to battle more than a dozen fires burning in steep, dry forests and shrublands.

The largest blaze, the Woodhead Fire, grew to nearly 70,000 acres Monday, forcing the evacuation of about 40 campers and residents in the sparsely populated patchwork of grazing land and national forest near the Oregon border.

The Oregon Department of Environmental Quality's air index is considered hazardous between 301 and 500. Values above 500 -- which numerous Oregon cities have reported during the past week -- are beyond the index's scale.

The entire state is under a smoke advisory through Thursday warning children, the elderly and people with health conditions to stay inside. Around Portland, several school districts canceled classes Tuesday because of the smoke.

Information for this article was contributed by The New York Times; and by Sara Cline, Gillian Flaccus, Janie Har and Juliet Williams of The Associated Press. Cline is a corps member for The Associated Press/Report for America Statehouse News Initiative. Report for America is a nonprofit national service program that places journalists in local newsrooms to report on undercovered issues.