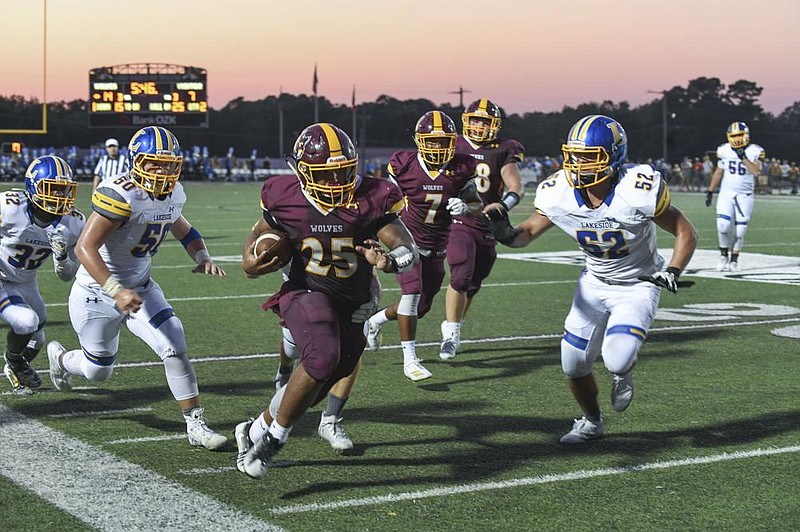 Garland County football will be on display for a Central Arkansas TV audience Thursday.

Hot Springs will host Lake Hamilton in the teams' final nonconference game before conference play at Tommy J. Holt Memorial Field at Joe Reese Stadium in Hot Springs in a matchup that will be on Little Rock's KARZ-TV.

Despite losing senior quarterback Layne Warrick before the season to a collarbone injury, Lake Hamilton -- the Arkansas Democrat-Gazette's No. 10 team in the overall top 10 and No. 3 team in Class 6A -- is 2-0 thanks to a strong running game led by juniors Owen Wilson and Tevin Woodley.

The Wolves won nine games a year ago and advanced to the Class 6A quarterfinals.

Coach Tommy Gilleran has high expectations for his team, and thinks a deeper run in the Class 6A playoffs is a possibility.

"We feel like this is one of the best teams I've had here," said Gilleran, who is in his fourth season at Lake Hamilton after spending 14 seasons at Fountain Lake, another Garland County school. "Overall, I think we have a chance to win the 6A."

"Coach Gilleran is a perfectionist," Burnett said. "He's done a great job. They're down to their second or third quarterback, and they're still playing well. We've got our hands full."

Hot Springs lost its season opener at Arkadelphia on Sept. 4, but rebounded to win 20-13 in overtime at Mena last Friday. Devin Johnson scored two rushing touchdowns for the Trojans.

"We were down 13-0," Burnett said. "We knew it was going to be tough. We just had to stick to the game plan. In the second half, our offense got the ball rolling."

Burnett said while the victory was good for the Trojans, he expects more from his team.

"You want to take care of business every quarter," Burnett said. "It's every day. It's in the weight room. It's a competition on the field. Competition makes you better. Competition is our best friend."

The tandem of Miller and Woodley came up big in the Wolves' 35-16 victory over Malvern last Friday. Woodley had 164 yards and 2 touchdowns on 23 carries, while Miller finished with 157 yards on 23 carries.

"They've done well so far," Gilleran said. "They're combining to average 300 yards a game for us."

Miller leads Lake Hamilton in rushing with 341 yards and a touchdown, and Woodley has 286 yards and 5 touchdowns.

Being on TV is exciting for the Wolves, Gilleran said.

"Any chance we have to promote Lake Hamilton schools and the football program is a big deal for me," said Gilleran, a 1988 graduate of Lake Hamilton. "It's a huge deal to our program."

Burnett said that playing on TV is also good for the Trojans, but he's looking to improve to 2-1 before his team has an open week Sept. 25. The 5A-South Conference, where the Trojans play, only has seven teams in 2020, so there's six league games, with Hot Springs not playing a conference game until Oct. 2 at Hope.

"Our kids have to come out and play hard," Burnett said. "We have to match their physicality."