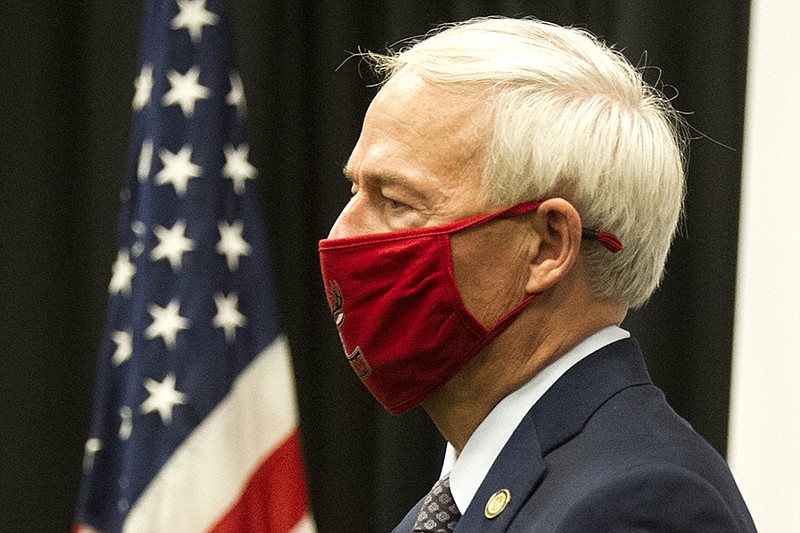 Governor Hutchinson stands to the side as Dr. Jose Romero, Secretary of the Department of Health, addresses the media during a daily update on Arkansas' response to COVID-19 on Friday, Sept. 11, 2020. The update, which took place in Mena, marked the final daily update that the governor and Secretary will be giving on COVID-19. The updates will instead be given weekly or "as needed" the governor announced yesterday. See more photos at arkansasonline.com/912gov/ (Arkansas Democrat-Gazette / Stephen Swofford)

While the Republican governor said the state's unemployment rate is well more than 2% lower than the national average, there are challenges for Arkansans who have lost their job, receive unemployment benefits and have had restrictions placed on them due to the covid-19 pandemic and are struggling financially.

Hutchinson said he supports the recommendation of the 15-member steering committee, which he appointed, to allow Arkansas cities and counties to be eligible for reimbursement of up to $150 million in federal funds for coronavirus-related expenses.

Each county's funding would be based partly on the general turnback formula that the state uses and partly based on public safety compensation, while each city's share would be based on population, according to Chris Villines, executive director of the Association of Arkansas Counties.

Hutchinson said the Legislative Council still has to approve spending authority for the state to reimburse cities and counties, but he expects that the request will be well received.

The Department of Finance and Administration will seek approval of spending authority for these federal funds from the council on Friday, department spokesman Scott Hardin said afterward.

The governor said the state Department of Human Services has distributed $4.8 million for rental assistance programs to community action agencies.

"But what you are going to see in the coming months is continued challenges for those that are on unemployment, are unemployed or struggling financially," Hutchinson told about 150 people attending a luncheon at the County Judges Association of Arkansas' annual fall meeting.

"Because previously they've had the enhanced unemployment assistance funds of $600 per week that has now been cut off, some of that realism is setting in," the governor said.

"We were approved for 3 weeks and will make the decision week-by-week based on the availability of state funds and ability to match federal funds," she said in a written statement.

Hutchinson said the U.S. Centers for Disease Control and Prevention's moratorium on evictions for health reasons means renters can give to their landlord verification that they are not paying rent this month for covid-related reasons, but that doesn't mean that that rent is forgiven.

"In fact, penalties and assessments for late payment fees are not even forgiven and that continues through Dec. 30," he said.

"So what happens in January if that renter does not pay the rent for September, October, November and December? You come January and they are way behind. And what happens to the landlord or the property owner that will be facing foreclosure because of the inability of the renters to pay rent?"

That's why it's important to provide rental assistance and that tenants use that type of help now versus putting off the payment of rent because that does not help them in the long run, Hutchinson said.

"We want to look at that at the state level, but I am challenging you at the county level," Hutchinson said.

"Those are covid-related costs that hopefully the [state Department of Finance and Administration] will say is permissible for the counties to utilize in your local community for rental assistance or for food assistance initiatives," he said.

Hutchinson said a number of businesses were interrupted for understandable restrictions, such as gyms and restaurants, or as a result of restrictions on interstate travel that impacted impacted the lodging, motel and tourism industry.

He said he supports the CARES Act steering committee's recommendation last week to use $50 million in federal funds for a grant program for businesses that have suffered from business interruption amid the pandemic.

He said he hopes the Legislative Council will grant spending authority for this program as well.

"'We have had one Ready for Business Grant program that was very successful," Hutchinson said, referring to the program that was authorized to spend up to $147.7 million in federal relief funds to help businesses.

He said it's important to supplement the Ready for Business Grant program with this $50 million request for economic assistance because "they are going to need it as they go through the fall before we completely see our economy returning here in the state."

Afterward, Melissa Whitfield, a spokeswoman for the state Department of Parks, Heritage and Tourism, said in a written statement, "We plan to be on [the Legislative Council's] agenda in October to request the appropriation."

Department of Parks, Heritage and Tourism officials are working with officials from the state Department of Finance and Administration, Arkansas Economic Development Commission, legislators and stakeholders to create rules for the program, she said.

"We want to have that piece in place before asking for appropriation," Whitfield said.

Meanwhile, Hutchinson said Dr. Anthony Fauci, director of the National Institute of Allergy and Infectious Diseases, has warned that this winter could be the biggest challenge of them all with the combination of the flu season and covid-19 infections.

"I am challenging you not to let down the guard," the governor told the county judges association.

"It is the social distancing. It is the wearing of masks. It is the protection of each other. We have got to be able to continue to do that. You are the leaders in your county and people look to you for leadership and setting the right example," Hutchinson said.

He said he knows that county judges are very glad his covid-19 news conferences are "no longer a daily update, but a weekly update.

"Yes, I get a few calls into my office from people who say thank you for letting me watch 'Days of Our Lives' once again," he said, drawing chuckles from the audience.

Last week, Hutchinson announced he will no longer hold the news conferences on each Monday-Friday, starting this week, and instead hold one each Tuesday and as needed.

Asked about the reaction to his discontinuing the weekday news conferences, Hutchinson said in a brief interview, "The people understand it.

"I think there is a lot of people really dependent upon that in terms of getting information, but there are other ways to get the information. I think they understand that the time is right to go to a weekly broadcast."