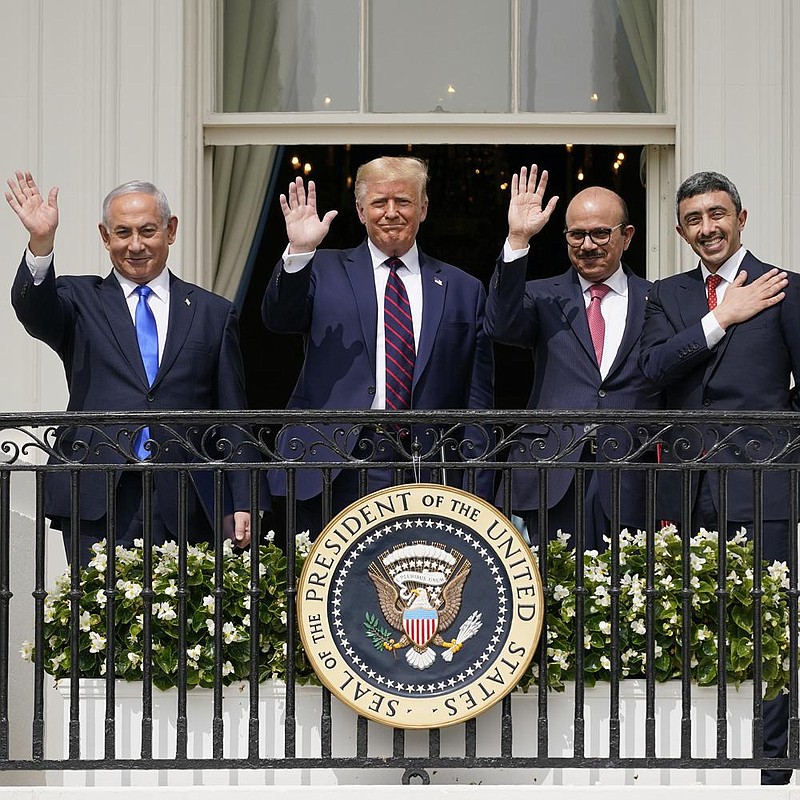 The bilateral agreements formalize the normalization of Israel's relations with the United Arab Emirates and Bahrain in line with their common opposition to Iran. But the agreements do not address the decades-long conflict between the Israelis and the Palestinians, who view the pacts as a stab in the back from their fellow Arabs and a betrayal of their cause for a Palestinian state.

Hundreds of people massed on the South Lawn to witness the signing of agreements that mark the third and fourth Arab nations to normalize relations with Israel -- and the first since Jordan took the step in 1994, following Egypt in 1979.

[Video not showing up above? Click here to view » https://www.youtube.com/watch?v=sDZayMHX94Y]

"We're here this afternoon to change the course of history," Trump said from a balcony overlooking the South Lawn. "After decades of division and conflict, we mark the dawn of a new Middle East."

Israeli Prime Minister Benjamin Netanyahu said the day "is a pivot of history. It heralds a new dawn of peace."

Both the Emirati and Bahraini foreign ministers spoke of the importance of creating a Palestinian state.

Emirati Foreign Minister Sheikh Abdullah bin Zayed al-Nahyan, the brother of Abu Dhabi's powerful crown prince, thanked Netanyahu for "halting the annexation" of West Bank land claimed by the Palestinians, which was done in exchange for Emirati recognition. Netanyahu, however, has insisted that Israel has only suspended its plans to annex West Bank settlements.

"Today, we are already witnessing a change in the heart of the Middle East -- a change that will send hope around the world," al-Nahyan said.

Bahraini Foreign Minister Abdullatif al-Zayani said Bahrain would stand with the Palestinians. "Today is a truly historic occasion," he said, "a moment for hope and opportunity."

In Jerusalem, authorities projected the flags of the U.S., Israel, the UAE and Bahrain on the walls of the Old City.

But in the Gaza Strip, Palestinian militants fired two rockets into Israel, apparently meant to coincide with the ceremony. The Israeli military said the rockets were fired from Gaza and that one was intercepted by air defenses. Magen David Adom, the Israeli emergency service, said it treated two people for injuries from broken glass.

Earlier in the day, Palestinian activists held small demonstrations in the West Bank and in Gaza, where they trampled and set fire to pictures of Trump, Netanyahu and the leaders of the UAE and Bahrain.

Israel and the U.S. hope the agreements can usher in a major shift in the region should other Arab nations, particularly Saudi Arabia, follow suit. That could have implications for Iran, Syria and Lebanon.

Asked about Saudi Arabia, Trump said that he had been in frequent contact with King Salman and that "at the right time, I think they will come in."

A White House statement attributed the agreements to Trump's "foreign policy vision and his acumen as a dealmaker."

But the countries involved, Trump said Tuesday, "had to make that choice themselves."

Other Arab countries believed to be close to recognizing Israel include Oman, Sudan and Morocco.

"We are very down the road with about five different countries," Trump told reporters before the ceremony.

Many longtime Mideast analysts and former officials, among others, have expressed doubts about the effects of the signings.

In addition to the bilateral agreements signed by Israel, the UAE and Bahrain, all three signed a document dubbed the "Abraham Accords" after the patriarch of the world's three major monotheistic religions.

The Abraham Accords and the bilateral agreement signed by Israel and Bahrain fell short of more detailed formal treaties that are the diplomatic norm. Both documents were made up of general statements pledging to advance diplomacy, mutual cooperation and regional peace.

The most detailed of the agreements was the one between Israel and the UAE. The nations agreed to approve bilateral agreements on 15 areas of mutual interest, including finance, trade, aviation, energy, telecommunications, health, agriculture and water.

During the signing ceremony, the leaders were seated at a long table where President Harry S. Truman once held weekly luncheon meetings with his Cabinet. Discussions about the Truman Doctrine to restrain Soviet expansion during the Cold War and the Marshall Plan to send billions of dollars in economic aid to Western Europe after World War II were held at the table.

Besides Republicans, a few House Democrats attended the event. Many Democrats, including presidential nominee Joe Biden, support the deals.

Rep. Elaine Luria, D-Va., said she accepted the invitation immediately upon receiving it over the weekend. "It definitely was a monumental event, and the ceremony was very fitting for that," Luria, a member of the House Armed Services Committee, said in a telephone interview afterward.

Like Luria, some other Democrats in attendance, such as Rep. Anthony Brindisi of New York, are freshmen in tough reelection races. Still others, such as Reps. Ted Deutch and Stephanie Murphy of Florida, hail from districts with large numbers of Jewish constituents.

Questions remain, however, about the significance of the agreements. Even in Israel, where the accords have received widespread acclaim, there is concern they might result in U.S. sales of sophisticated weaponry to the UAE and Bahrain, thus potentially upsetting Israel's qualitative military edge in the region.

Trump said he is OK with selling military aircraft to the UAE. Pelosi welcomed the agreements but said she wants to learn details, specifically what the Trump administration has told the UAE about buying American-made F-35 aircraft and about Israel agreeing to freeze efforts to annex portions of the West Bank.

The UAE and Bahrain have a history of suppressing dissent and critical public opinion, but there have been indications that the agreements are not nearly as popular or well-received as they are in Israel.

Bahrain's largest Shiite-dominated opposition group, Al-Wefaq, which the government ordered dissolved in 2016 amid a yearslong crackdown on dissent, said there is widespread rejection of normalization with Israel.

The ceremony followed months of diplomacy led by Jared Kushner, Trump's son-in-law and senior adviser, and the president's envoy for international negotiations, Avi Berkowitz. On Aug. 13, the Israel-UAE deal was announced. That was followed by the first direct commercial flight between the countries, and then the announcement Friday of the Bahrain-Israel agreement.

Neither the UAE nor Bahrain is or ever has been at war with Israel, so the documents are not peace treaties in the formal sense. But until now, both Persian Gulf states had officially considered Israel to be illegitimate.

Trump predicted that the Palestinians would eventually come on board. "Obviously, we speak to them," he said, even as he recalled that his administration had cut off $750 million in funding to the Palestinians because "they treat the United States so badly."

"It's not conflict resolution, and it's not peace -- this is a business deal," said Jeremy Ben-Ami, the president of J Street, a liberal pro-Israel advocacy group that's sharply critical of Netanyahu. "It's very, very clear that there are aligned interests between Israel and these countries -- military, security, diplomatic, economic -- and those interests have been there for two decades."

Trump greeted all three leaders in the Oval Office separately before the signing ceremony. As he sat there with Netanyahu, he once again expressed a desire to strike a deal with Iran over its nuclear program. Earlier in Trump's administration, he withdrew the U.S. from an accord that Tehran reached with the Obama administration to curtail Iranian nuclear ambitions.

Trump said he had been in communication with Iranian representatives and told them that "you should wait to see the [U.S.] election first." Trump also said that "there is nothing ... Iran would like to see better than Sleepy Joe Biden elected."

But "I'm going to make a much better deal," he said, predicting his own victory. "Iran will be very rich and very quickly."

The staging of Tuesday's event seemed to invoke the scene more than 25 years ago in the same location when then-President Bill Clinton brokered an agreement -- and iconic handshake -- between Prime Minister Yitzhak Rabin of Israel and the Palestinian leader Yasser Arafat. Trump declared that "there's going to be peace in the Middle East," a phrase that typically suggests a resolution to Israel's conflict with the Palestinians.

But Dennis Ross, a former Middle East peace negotiator who helped to broker that 1993 agreement, said the two events were "very different." He said the agreements signed Tuesday were "significant" because they demonstrated that "Palestinians cannot freeze the region and prevent open cooperation with Israel."

Information for this article was contributed by Deb Riechmann, Matthew Lee, Jonathan Lemire, Aya Batrawy, Laurie Kellman and Joseph Krauss of The Associated Press; by Karen DeYoung, Anne Gearan, Ruth Eglash and Felicia Sonmez of The Washington Post; and by Michael Crowley of The New York Times. 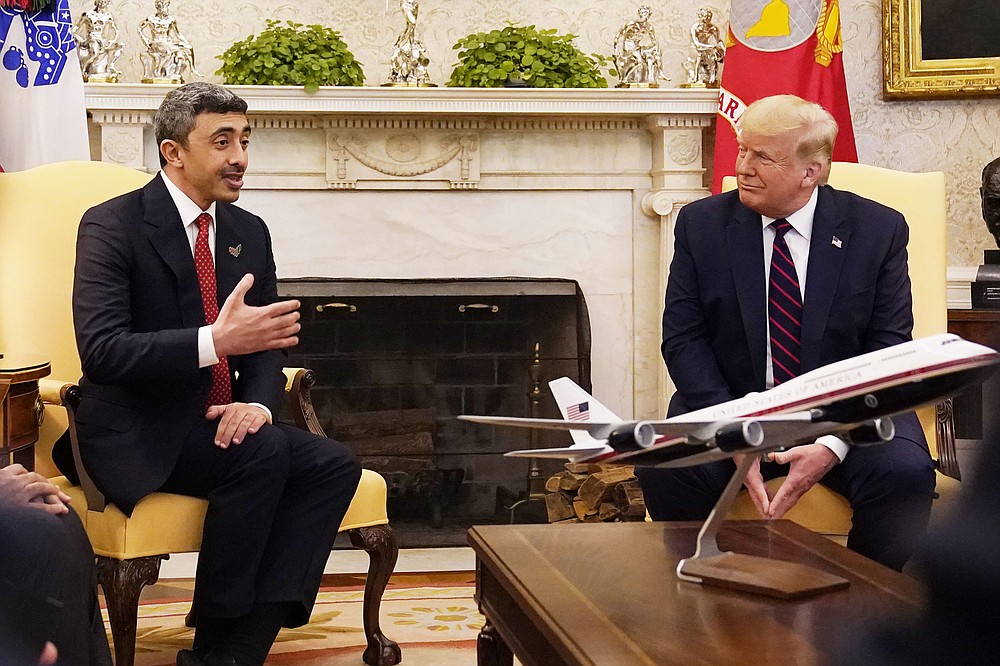 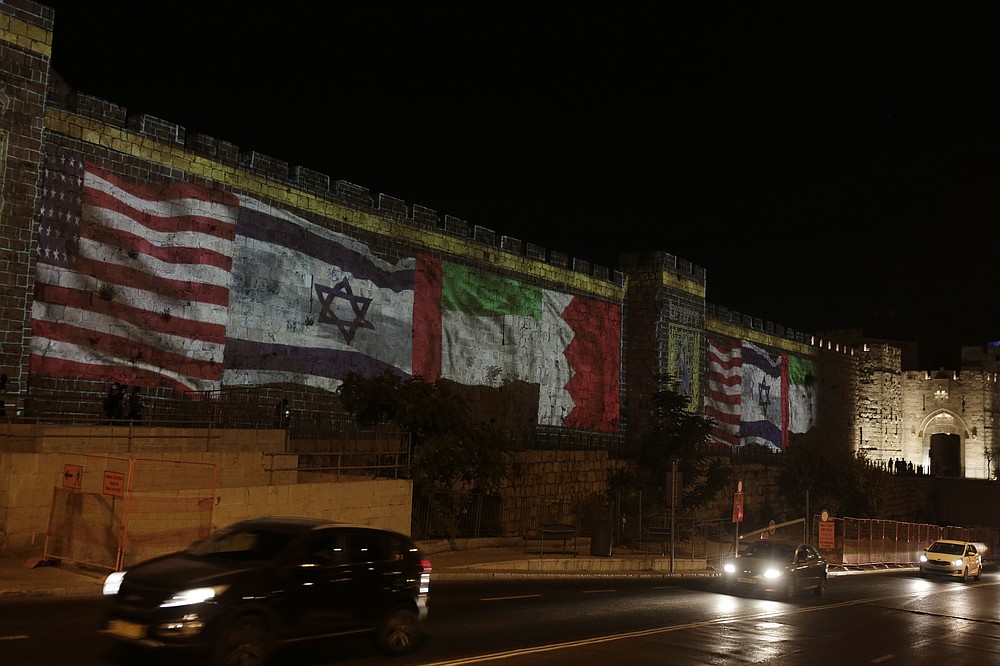 Representations of the U.S., Israeli, Emirati and Bahraini flags are projected onto a wall of Jerusalem's Old City, marking the day of a signing ceremony in Washington signifying the two Gulf nations' normalization of relations with Israel, Tuesday, Sept. 15, 2020. (AP Photo/Maya Alleruzzo) 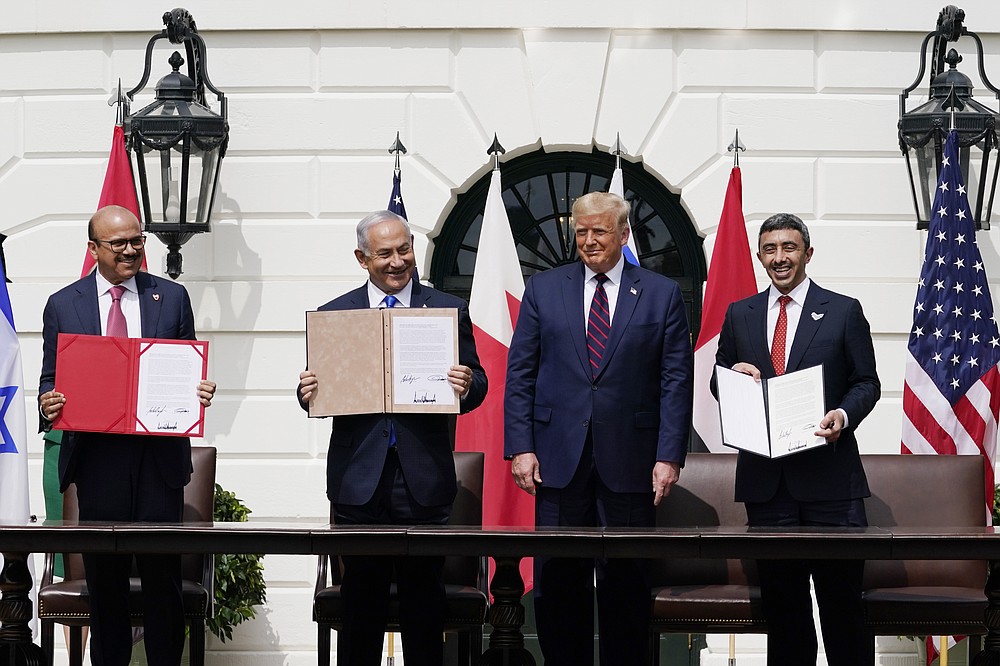 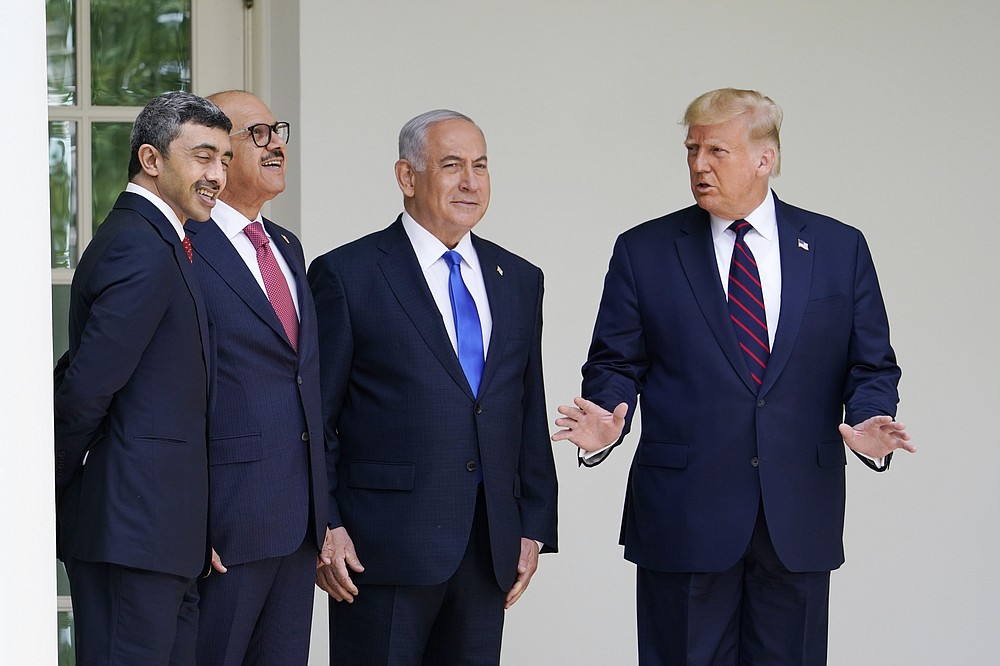 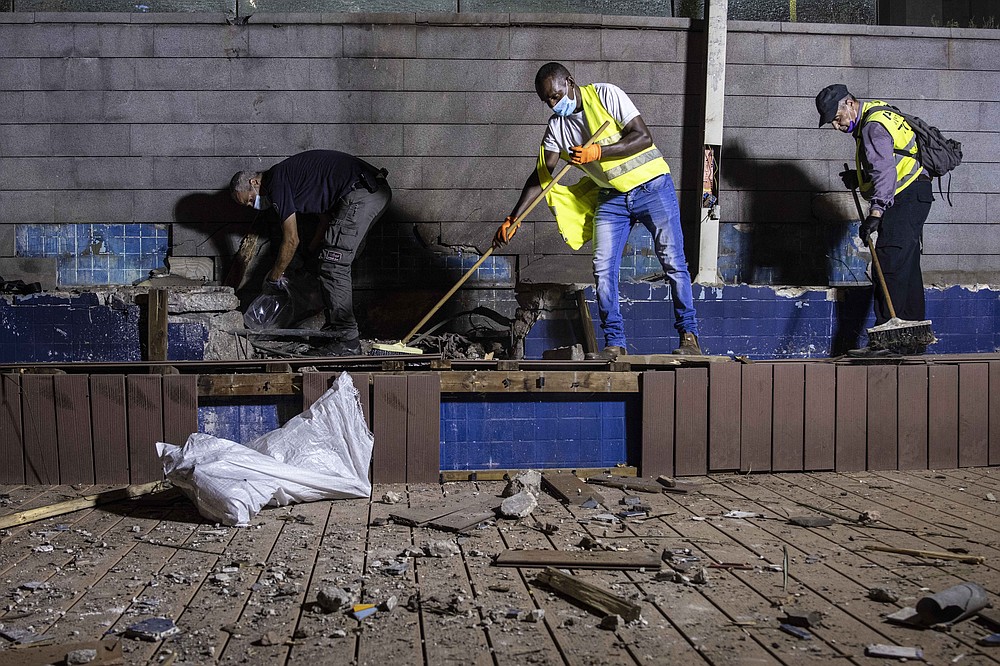 Israeli police inspect the damage at the site hit by a rocket fired by Palestinian militants from the Gaza Strip in the southern city of Ashdod, Israel, Tuesday, Sept. 15, 2020. The Israeli military says two rockets were fired from Gaza and one was intercepted by air defenses. Magen David Adom, the Israeli emergency service, says it treated two people for minor injuries from broken glass. (AP Photo/Tsafrir Abayov) 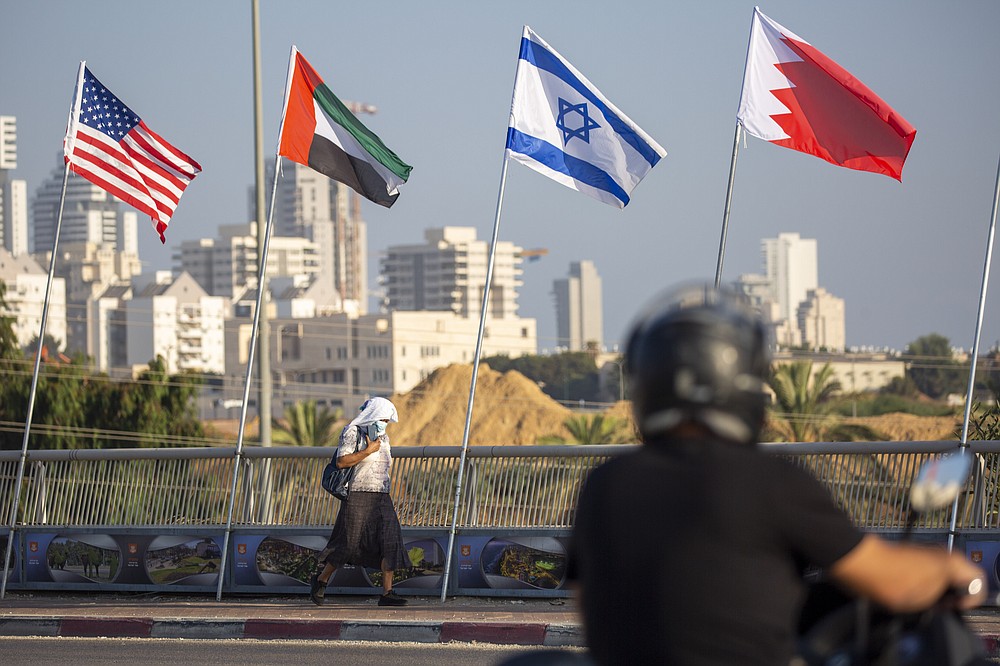 A woman wearing a face mask against the coronavirus pandemic walks past American, United Arab Emirates, Israel and Bahraini flags at the Peace Bridge in Netanya, Israel, Monday, Sept. 14, 2020. For the first time in more than a quarter-century, a U.S. president will host a signing ceremony between Israelis and Arabs at the White House, billing it as an "historic breakthrough" in a region long known for its stubborn conflicts. (AP Photo/Ariel Schalit) 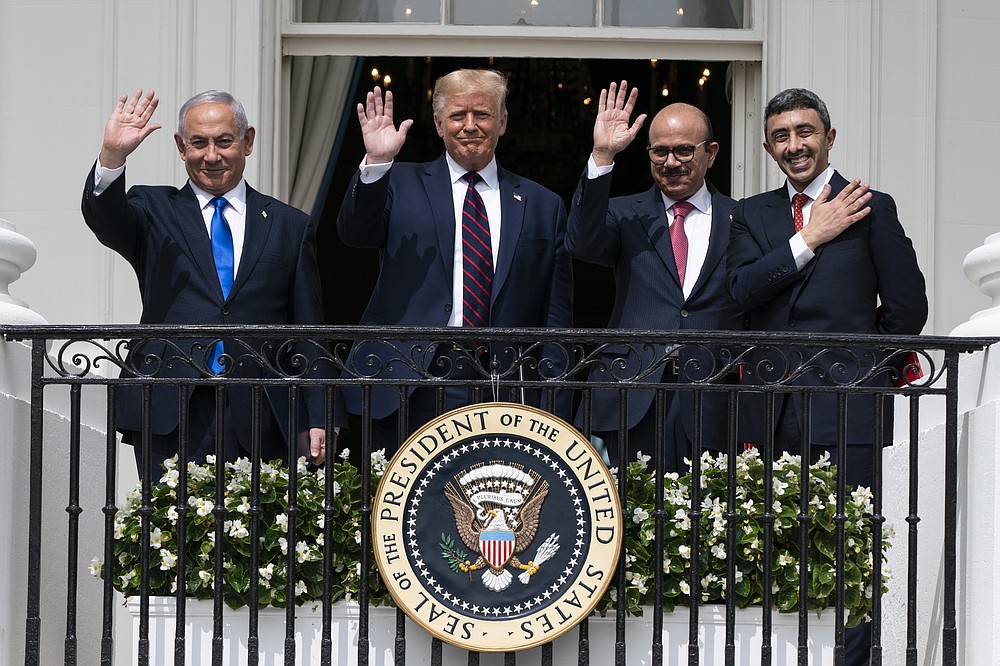 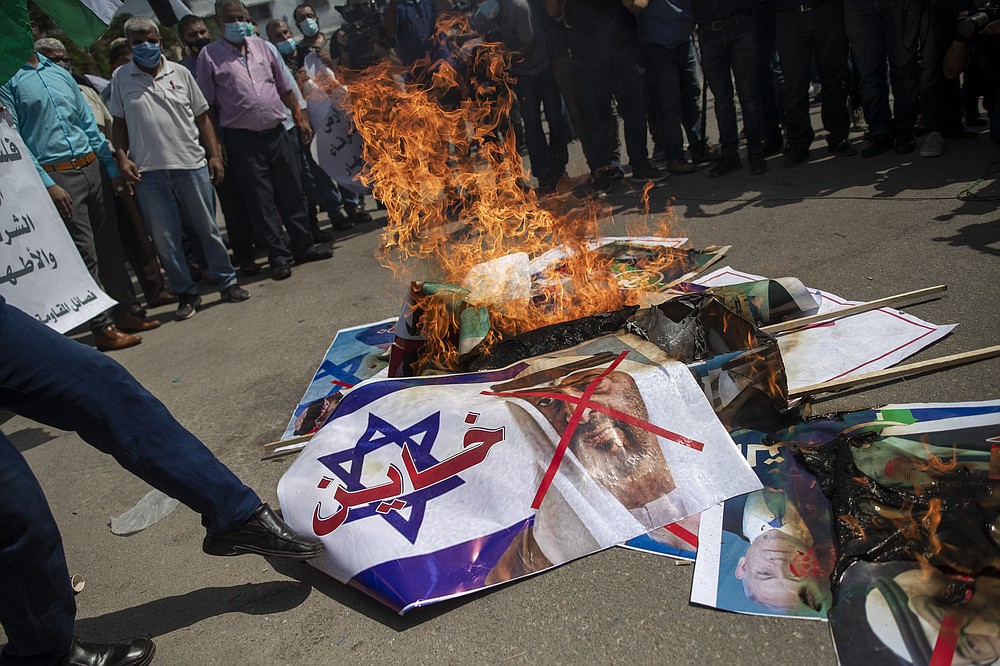