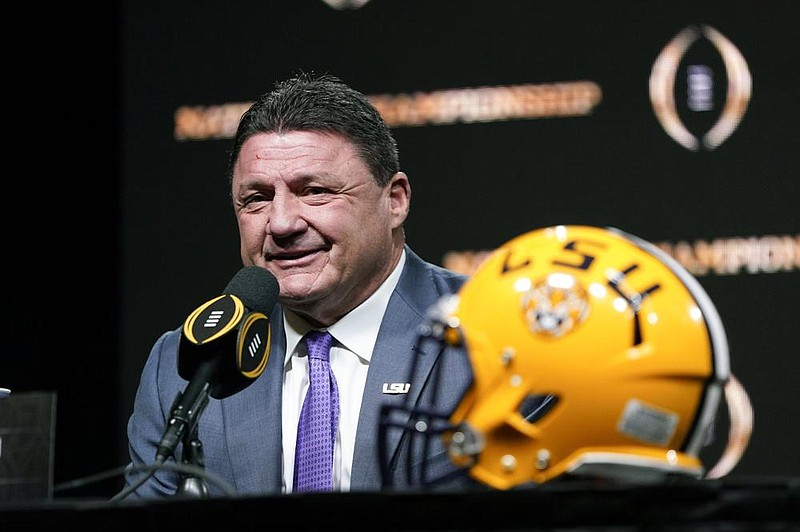 LSU Coach Ed Orgeron said most of the players on his team had contracted and recovered from covid-19. (AP file photo)

Orgeron: 'Most' had virus

Most of LSU's football players have contracted and recovered from covid-19, Coach Ed Orgeron said Tuesday, leaving the coaching staff hopeful those players will remain eligible to play the bulk of the season before they have to be tested again. Orgeron made those comments while discussing how he would plan for the possibility of seemingly healthy starters or regulars suddenly being deemed ineligible to suit up for the defending national champions because of a positive covid-19 test. The coach explained that because players who have recovered from covid-19 do not have to be tested again for 90 days under SEC protocols, he figures he won't likely have to worry about those who've come back from the virus suddenly being ruled out again because of it. "I think, not all of our players, but most of our players have caught it," Orgeron said during a video conference, adding later that he did not know the percentage of the roster that had tested positive.

The New York Jets will face the defending NFC champion San Francisco 49ers without Le'Veon Bell. The running back was placed on injured reserve Tuesday with a hamstring injury. Bell was hurt in the second quarter of the Jets' season-opening 27-17 loss at Buffalo on Sunday. He will miss at least the next three games, and be eligible to return to the active roster in Week 5. The Jets also announced they have placed rookie wide receiver Denzel Mims (hamstring) and second-year linebacker Blake Cashman (groin) on injured reserve. The team also signed running back Kalen Ballage to the active roster after a trade for him on Aug. 27 fell through three days later when he failed his physical with the Jets. New York had sent a conditional seventh-round pick to Miami for Ballage, who played one season under Coach Adam Gase with the Dolphins.

The San Francisco 49ers have agreed to a one-year contract with free agent receiver Mohamed Sanu. Sanu's agent Mike McCartney said Tuesday that the sides reached the agreement to reunite Sanu with 49ers Coach Kyle Shanahan. Shanahan was offensive coordinator in 2016 in Atlanta with Sanu and said Monday the team was interested in adding him. The Niners are banged up at receiver after placing Deebo Samuel on injured reserve last week with a broken foot. Rookie Brandon Aiyuk is working his way back from a hamstring injury, and Richie James Jr. hurt his hamstring in a season-opening loss to Arizona. All-Pro tight end George Kittle also sprained his knee against the Cardinals and his status for this week remains up in the air. The 49ers got only four catches all game from wide receivers in the opener .

German rider Lennard Kamna won the first Alpine stage of the Tour de France on Tuesday after pulling clear of a group of breakaway riders on his way to the ski resort of Villard-de-Lans. The 24-year-old Kamna, who rides for the Bora-hansgrohe team, made his decisive move on the penultimate ascent to drop former race leader Julian Alaphilippe, Richard Carapaz and Sebastien Reichenbach, three rivals with a strong pedigree. The favorites for the overall title, including yellow jersey Primoz Roglic, rode in the peloton some 15 minutes behind Kamna, who was not a threat in the general classification. Kamna was part of a group of 15 riders who broke away from the peloton early in the 102-mile trek. Among them, Frenchman Quentin Pacher also tried a solo escape but his effort was short lived as he was easily caught and then dropped by Alaphilippe, Carapaz, Reichenbach and Kamna. Carapaz, the Giro d'Italia champion, made Alaphilippe and Reichenbach crack with a couple of biting attacks but could not respond when Kamna countered before the summit. The German was faster than his remaining rival on the flat sections as he sped toward Villard-de-Lans to post the biggest win of his career.

Nick Nurse would have been in the final year of his contract next season. The Toronto Raptors weren't about to let that happen with their coach. Nurse and the Raptors announced a multiyear extension Tuesday, without divulging the terms. In his two seasons with Toronto, Nurse won the 2019 NBA championship and led the Raptors to more wins than any team in the league over that span. Nurse was originally signed to a three-year deal in June 2018 to lead the club. The Raptors went to the Eastern Conference semifinals this season, thriving in the NBA's restart bubble even after having to come to Florida two weeks early because of the challenges of bringing players back to Canada amid a quarantine. Their run ended Friday night with a Game 7 loss to the Boston Celtics. Nurse -- a Toronto assistant coach for five seasons before getting the top job -- was the runaway winner of the NBA's coach of the year award this season, getting 90 of the 100 first-place votes. The Raptors went 53-19 this season, the .736 winning percentage setting a franchise record. Nurse is 111-43 in regular-season games and 23-12 in playoff games.

Stanton off IL for Yanks

Giancarlo Stanton was activated by the New York Yankees on Tuesday and started at designated hitter, going 0 for 4, after missing 32 games because of a strained left hamstring. New York made the move before a series opener against Toronto. The Yankees also activated third baseman Gio Urshela, who has recovered from a bone spur in his right elbow, and right-hander Jonathan Loaisiga, who was sidelined with a medical condition the team did not specify. Right fielder Aaron Judge, limited to one game since Aug. 11 because of a strained right calf, is likely to be activated today or Thursday. Stanton hit .293 with 3 homers and 7 RBI in 14 games before he got hurt.

Dodgers get Turner back

The Los Angeles Dodgers activated third baseman Justin Turner from the 10-day injured list. He started at designated hitter for Tuesday night's game at San Diego, collecting three hits. He missed 13 games with a left hamstring strain. Before going on the IL, Turner was batting .282 with 2 homers and 20 RBI in 32 games during the shortened season. In a corresponding roster move, the Dodgers optioned right-hander Josh Sborz. He has made three appearances for the team, allowing 1 earned run in 3 innings with 2 strikeouts.

The Washington Capitals hired Peter Laviolette, who won the Stanley Cup with the Carolina Hurricanes in 2006, as coach on Tuesday. Laviolette replaces Todd Reirden, who was fired last month after a second consecutive first-round exit in the playoffs. Laviolette, 55, has 18 years of experience as a head coach. He most recently coached the Nashville Predators but was fired in January after 5 1/2 seasons with the team. Laviolette led the 2010 Philadelphia Flyers and 2017 Predators to the Stanley Cup Final. He also previously coached the New York Islanders. Laviolette ranks 16th in all-time coaching wins with a career record of 637-425-123.