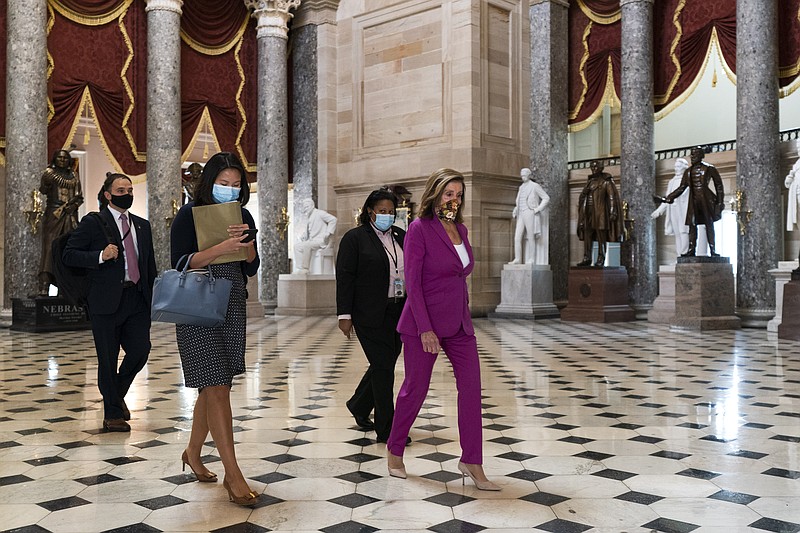 WASHINGTON -- Speaker Nancy Pelosi said Tuesday that the House will remain in session until lawmakers deliver another round of covid-19 relief, a move that came as Democrats from swing districts signaled discontent with a standoff that risks forcing them to face voters without delivering more aid.

"We are committed to staying here until we have an agreement, an agreement that meets the needs of the American people," Pelosi said on CNBC.

Pelosi told her Democratic colleagues in a morning conference call that "we have to stay here until we have a bill." That's according to a Democratic aide who spoke on condition of anonymity but was authorized to quote her remarks.

But within hours of those comments, Majority Leader Steny Hoyer, D-Md., clarified that lawmakers would not actually remain in Washington beyond their scheduled recess date of Oct. 2. He said they will instead be required to be on call in case they must return.

Pelosi's comments came as moderate Democrats, many from areas won by President Donald Trump four years ago, signed on to a $1.5 trillion rescue package endorsed by the bipartisan Problem Solvers Caucus, a group of about 50 lawmakers who seek common solutions to issues.

The plan contains many elements of covid-19 rescue packages devised by both House Democrats and Senate Republicans, including aid to schools, funding for state and local governments, and renewal of lapsed virus-related jobless benefits.

The price tag is less than the $2.2 trillion figure cited by Pelosi, but it's also well above an approximately $650 billion Senate GOP plan that failed last week because of Democratic opposition.

Talks between Pelosi and the Trump administration broke down last month, and there has been little optimism they will rekindle before Election Day.

The developments occurred on the first full day the House was back in session from its August recess, with lawmakers looking at a three-week sprint that may include passing a stopgap spending bill to fund the government by Sept. 30.

Pelosi has maintained a hard line in relief-bill negotiations and has been at odds with White House Chief of Staff Mark Meadows. She orchestrated House passage of a $3.4 trillion covid-19 rescue package back in May, but the effort was immediately dismissed by Senate Republicans and the Trump administration.

Tuesday's remarks, said Pelosi spokesman Drew Hammill, do not mean that the speaker is adopting a more flexible position.

Pelosi is holding out for wide-ranging legislation that would include generous aid for cities and states, as well as unemployment and nutrition assistance, stimulus checks for individual Americans, money for coronavirus testing and tracing, help for the Postal Service and elections, and more.

She rejected the notion of a slimmed-down, or "skinny," bill, such as the $300 billion measure Democrats blocked last week in the Senate.

"A skinny bill is not a deal. It's a Republican bill," Pelosi said on the conference call.

Success is by no means guaranteed, and many people on Capitol Hill remain skeptical that an agreement between the White House and Democrats is likely before the election.

"My sense is the clock is running out," said Senate GOP Whip John Thune of South Dakota. "I don't see any intention or desire on the part of the Democrat leadership at the moment -- regardless of what their members are saying -- to cooperate and to work together on a solution. I think they feel like they've got the issue, and they want to try and ride it in November."

Rep. Dusty Johnson, R-S.D., a member of the Problem Solvers group, described the lengthy, bipartisan negotiation that produced a consensus on a proposal, saying, "This is how Congress is supposed to work." The group hopes the package illustrates the kinds of compromises that top Democrats and the administration would have to make to get a measure passed and signed into law.

Hoyer said the moderates had developed "useful ideas, important ideas," but he said the proposal did not do enough to address the ongoing needs of helping the economy recover from the covid-19 crisis.

And a set of powerful Democratic committee chairs swung against the moderates' proposal, saying it "leaves too many needs unmet" -- a leadership effort that signals that the Problem Solvers bill is going nowhere.

"I hope we can get a deal. It's really up to the president. As I said, we have agreed to come down a trillion [dollars]," said top Senate Democrat Charles Schumer of New York. "They come up a trillion, and then we're close. That's very clear. And the bottom line is, they haven't done that."

Trump's son-in-law and senior adviser, Jared Kushner, said Tuesday that any new stimulus may have to wait until after the Nov. 3 vote.

"We do think there is a need for another intervention; we've reached out to Congress; we've been negotiating," Kushner said during an interview on CNBC. "It may have to happen after the election because there obviously are politics involved. This is Washington."

The Problem Solvers measure contains another round of $1,200 direct payments favored by Trump. It contains a liability shield against lawsuits brought against businesses that have reopened their doors, which is favored by Republicans but opposed by Pelosi and trial lawyers.

The Problem Solvers measure would reinstate the lapsed federal jobless aid at $450 per week for eight weeks, then replace up to $600 weekly in lost wages for an additional five weeks, but not if that benefit causes workers to exceed their wages.

That is more than Republicans wanted but less than the flat, $600-a-week benefit that lapsed at the end of July, which Democrats have insisted must be extended in full.

The proposal also would send $500 billion to strapped state and local governments.

The coalition proposing the measure is led by Reps. Josh Gottheimer, D-N.J., and Tom Reed, R-N.Y. In addition to Gottheimer and Reed, Reps. Dean Phillips, D-Minn., and Johnson helped write the framework.

In addition to money for state and local governments and for schools, lawmakers included $100 billion for testing and contact tracing. There is money for expanding rural and urban broadband, supporting agricultural workers, and extending the 2020 census to ensure an accurate count.

The bill would allocate $25 billion for mortgage and rental assistance, $130 billion for schools and $15 billion for the Postal Service, as well as separate funds to administer the 2020 elections during a health crisis and for food assistance programs.

The group also proposed building in automatic triggers that would extend jobless aid and provide for another round of stimulus checks if the economy remains hobbled in January.

"Republicans helped build the greatest economy in a generation, and the American way of life was thriving," said McCarthy, flanked by lawmakers on the steps of the Capitol, to present the "Commitment to America." He said, "We will do it again."

To fight the virus outbreak, Republicans call for tripling covid-19 testing and investing in therapeutics for treatments.

As lawmakers gathered Tuesday outside the Capitol, Rep. Steve Scalise of Louisiana, the GOP Whip, said the party will "renew and restore" the nation.

Information for this article was contributed by Andrew Taylor and Lisa Mascaro of The Associated Press; by Erica Werner and Paul Kane of The Washington Post; by Billy House and Erik Wasson of Bloomberg News; and by Nicholas Fandos and Emily Cochrane of The New York Times. 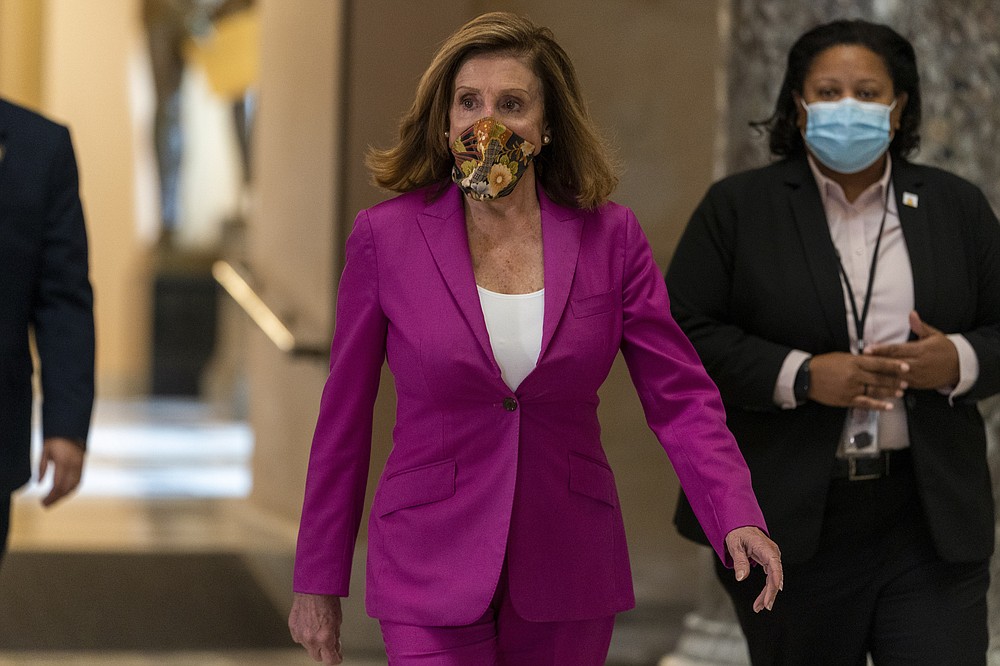 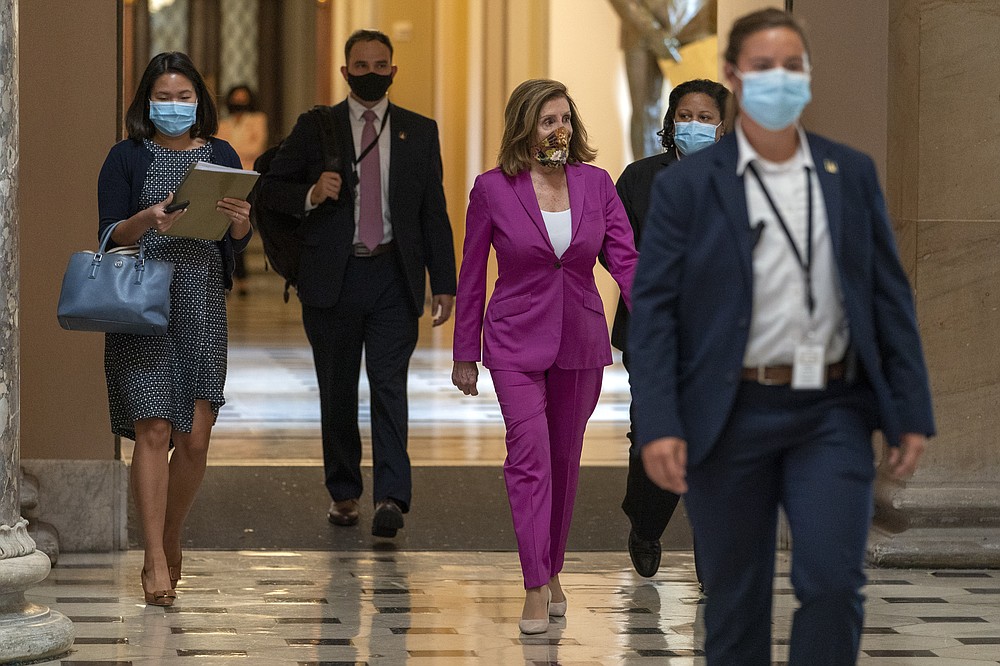