Opposition leader Navalny reports he can breathe on own by VLADIMIR ISACHENKOV AND DAVID RISING THE ASSOCIATED PRESS | September 16, 2020 at 4:33 a.m. 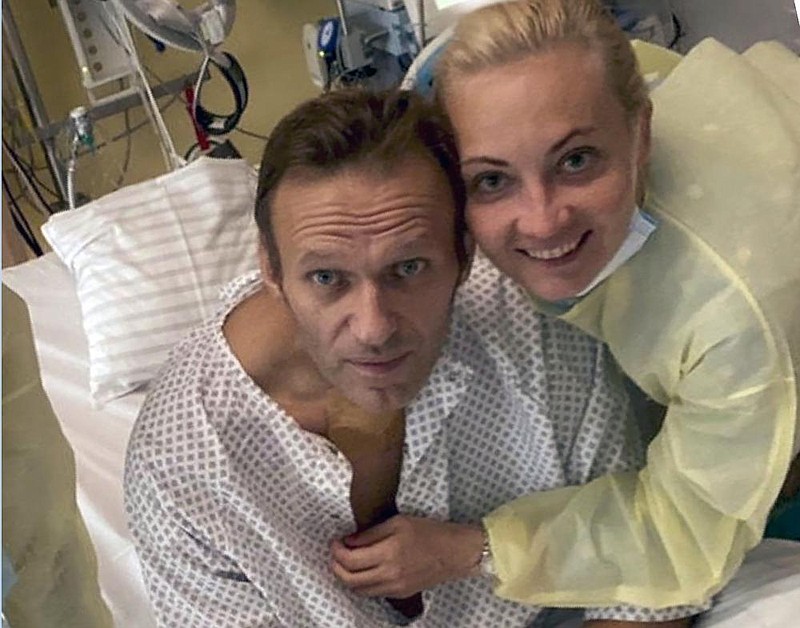 Russian opposition leader Alexei Navalny is shown with his wife, Yulia, at a hospital in Berlin in this photo posted Tuesday by Navalny. (AP/Instagram)

BERLIN -- Russian opposition leader Alexei Navalny on Tuesday posted a picture of himself from his hospital bed in Germany where he's recuperating from being poisoned with a nerve agent, wryly joking about being able to breathe on his own.

"Hi, this is Navalny," he wrote in the Russian-language post on Instagram in the first image of the 44-year-old since he was taken to Berlin's Charite hospital. The photo shows him being given a hug by his wife Yulia and flanked by his two children as he sits upright in his bed in a hospital gown.

"I have been missing you. I still can't do almost anything on my own, but yesterday I managed to breathe on my own for the entire day," he added in the post, which got over 1.1 million likes in several hours.

Separately, Navalny's spokeswoman Kira Yarmysh tweeted that once he has recovered, Navalny plans to return to Russia, where he has supported opposition candidates and waged anti-corruption battles. "No other option has ever been considered," she wrote.

[Video not showing up above? Click here to view » https://www.youtube.com/watch?v=Z-Z2NDaIxcc]

Navalny fell ill on a flight from Siberia to Moscow on Aug. 20 and treated at a hospital in the city of Omsk. Two days later, he was flown to the German hospital, where he was kept in an induced coma for more than two weeks as he was treated with an antidote. On Sept. 7, doctors said his condition had improved enough for him to be brought out of the coma.

On Monday, the hospital said he had been removed from a ventilator and was able to leave his bed for "short periods of time."

Despite his recovery, doctors have said they cannot rule out long-term health issues associated with the poisoning.

Leonid Volkov, a top associate of Navalny, refused to give any details on his condition or his possible return when reached by The Associated Press.

A German military lab has determined that Navalny was poisoned with Novichok, the same class of Soviet-era agent that Britain said was used on former Russian spy Sergei Skripal and his daughter in Salisbury, England, in 2018. On Monday, the German government said independent tests by labs in France and Sweden backed up its findings.

The Hague-based Organization for the Prohibition of Chemical Weapons also is taking steps to have samples from Navalny tested at its designated labs, Germany has said.

The Kremlin has bristled at calls from German Chancellor Angela Merkel and other leaders to answer questions about the poisoning, denying any official involvement.

French President Emmanuel Macron's office said he had expressed "deep concern over the criminal act" that targeted Navalny directly with Russian President Vladimir Putin on Monday. The Kremlin said Putin in the call "underlined the impropriety of unfounded accusations against the Russian side" and emphasized Russia's demand for Germany to hand over analyses and samples.

Kremlin spokesman Dmitry Peskov told reporters Tuesday that Russia is puzzled by Germany's refusal to share Navalny's analyses and other medical data, or compare notes with the Russian doctors who said they found no trace of poison in his system while he was at a hospital in the Siberian city of Omsk.

"Russia has been absolutely open for cooperation in determining what happened," Peskov said. "Russia needs cooperation with the German side in getting the patient's biological samples to be able to advance."

Russian Foreign Minister Sergey Lavrov, who canceled a scheduled trip Tuesday to Berlin, said Russian authorities have conducted a preliminary inquiry and documented the meetings Navalny had before falling ill, but he emphasized they need to see the evidence of his poisoning to launch a full criminal investigation.

Lavrov said Navalny's life was saved by the pilots of the plane who quickly landed in Omsk after he collapsed on board and by the rapid action of doctors there. He accused the West of trying to smear Russia and use the incident as a pretext for new sanctions against Moscow.

In a phone call Tuesday with German Foreign Minister Heiko Maas, Lavrov warned him against politicizing the situation with Navalny, the Russian Foreign Ministry said. Lavrov said Moscow would view Germany's continued stonewalling of Russia's request for analyses and samples as a "lack of desire to help determine the truth as part of an objective and thorough investigation."

Berlin has rejected suggestions from Moscow that it is dragging its heels on sharing evidence. Asked why no samples from Navalny have been given to Russia, a German Foreign Ministry spokeswoman said Monday that "Mr. Navalny was in Russian treatment in a hospital for 48 hours." 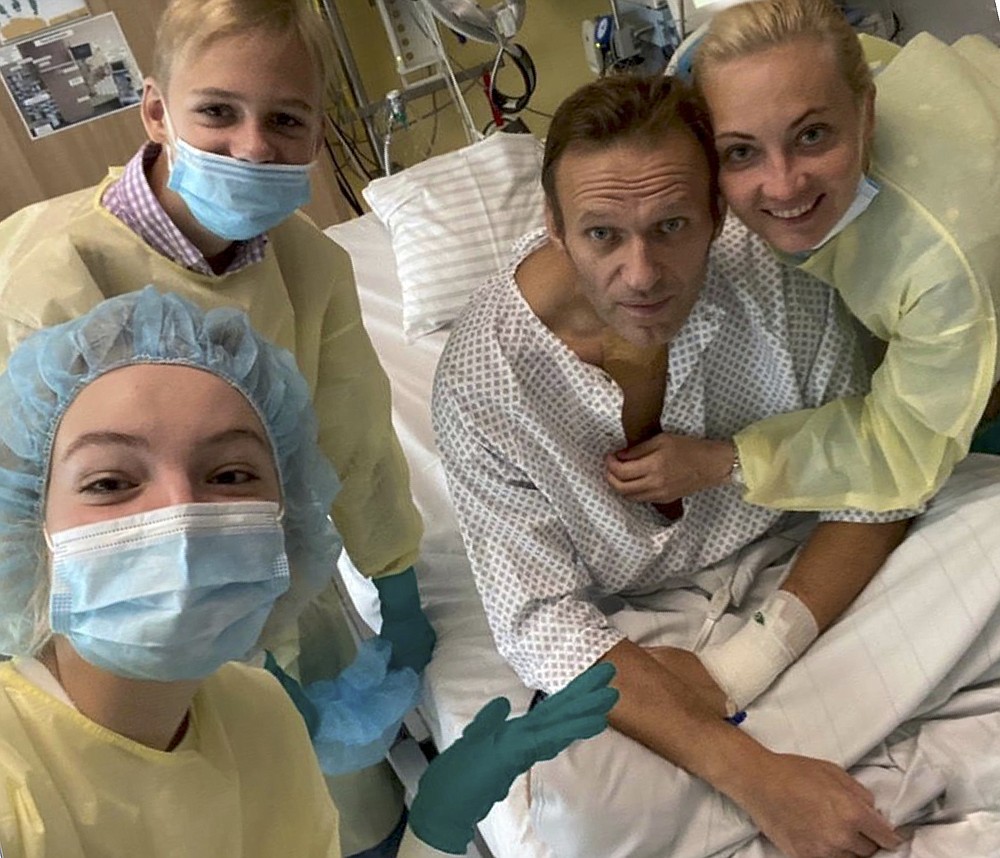 This handout photo published by Russian opposition leader Alexei Navalny on his instagram account, shows himself, centre, and his wife Yulia, right, daughter Daria, and son Zakhar, top left, posing for a photo in a hospital in Berlin, Germany. Russian opposition leader Alexei Navalny has posted the picture of himself in a hospital in Germany and says he's breathing on his own. He posted on Instagram Tuesday Sept. 15, 2020: "Hi, this is Navalny. I have been missing you. I still can't do much, but yesterday I managed to breathe on my own for the entire day." (Navalny instagram via AP) 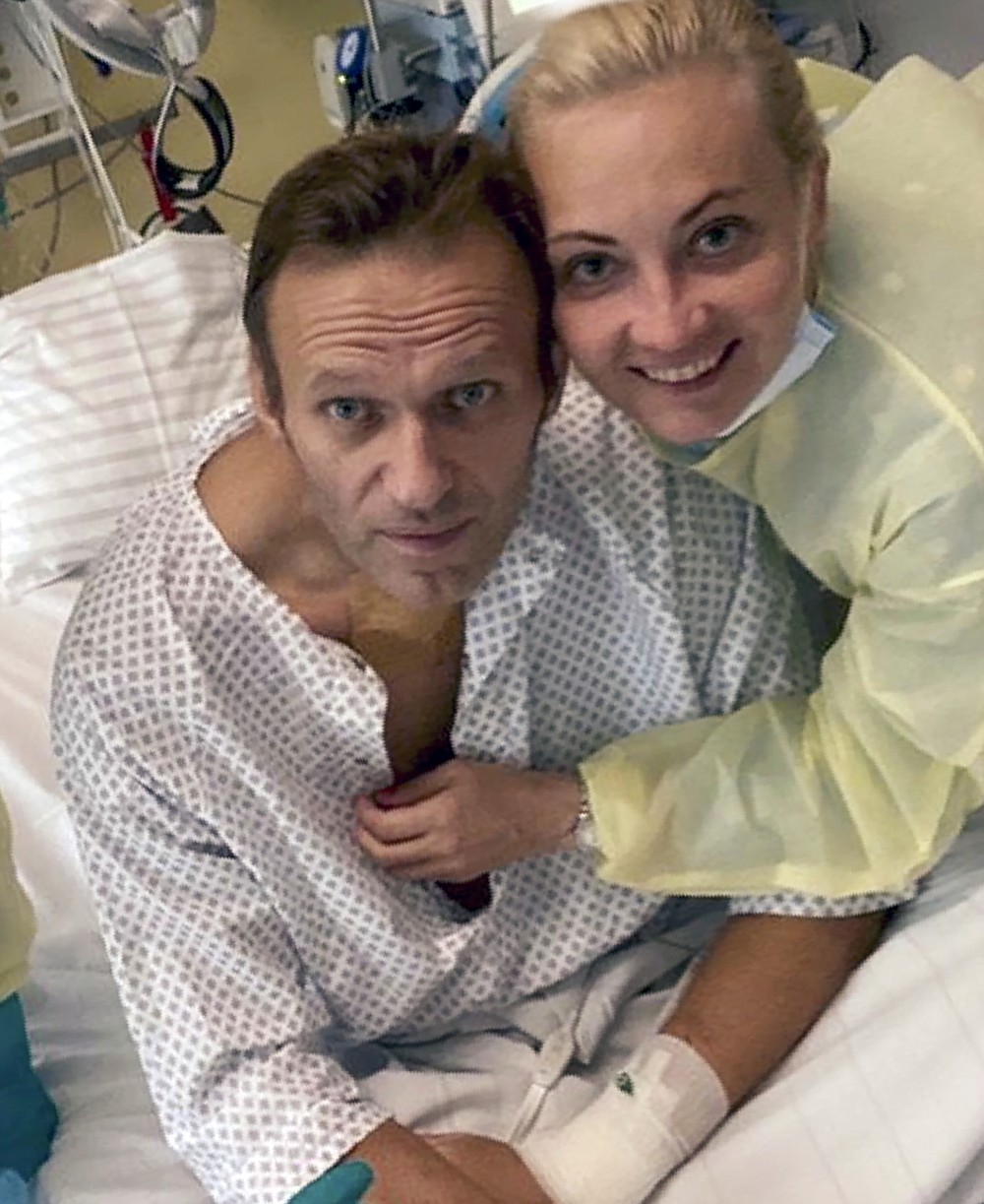 This handout photo published by Russian opposition leader Alexei Navalny on his instagram account, shows himself and his wife Yulia, posing for a photo in a hospital in Berlin, Germany. Russian opposition leader Alexei Navalny has posted the picture of himself in a hospital in Germany and says he's breathing on his own. He posted on Instagram Tuesday Sept. 15, 2020: "Hi, this is Navalny. I have been missing you. I still can't do much, but yesterday I managed to breathe on my own for the entire day." (Navalny instagram via AP)
ADVERTISEMENT