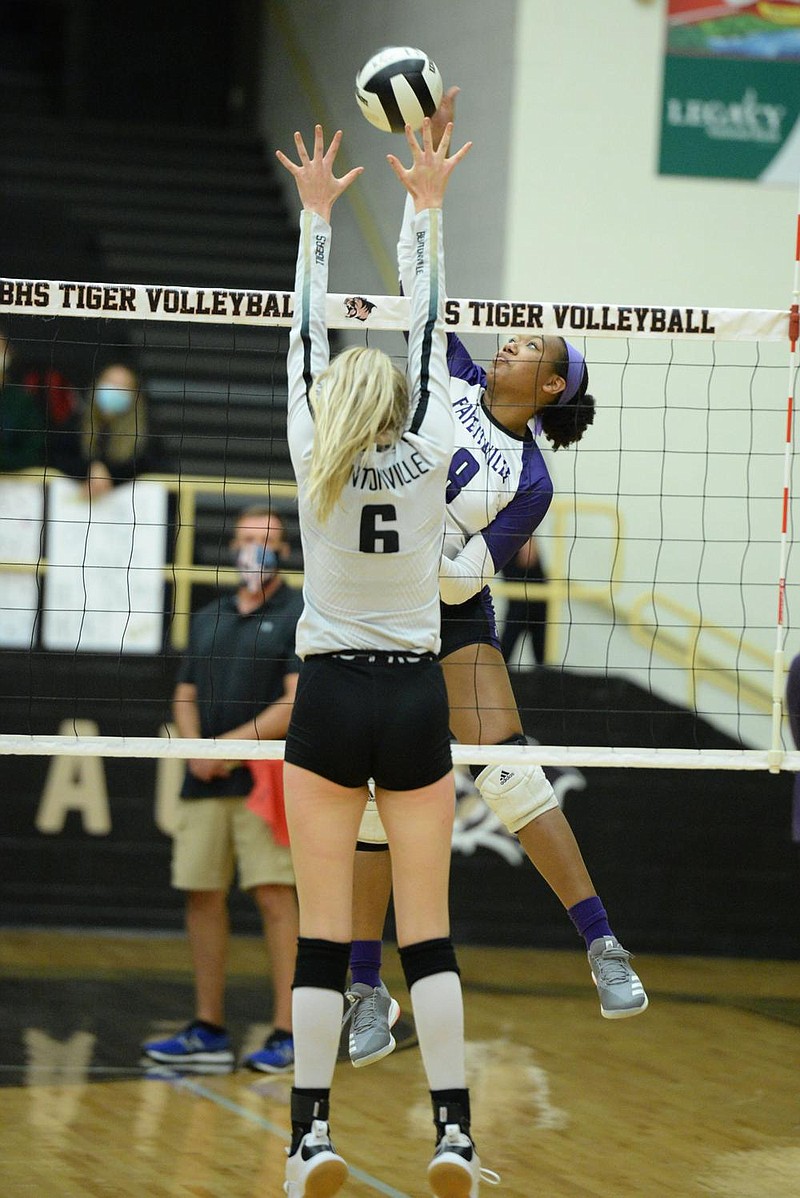 BENTONVILLE -- Minus a small bump in the third set, Fayetteville continued to roll Tuesday night.

The Lady Purple Bulldogs never trailed and dominated for the most part in a 25-15, 25-9, 25-17 win over Bentonville at Tiger Arena.

Fayetteville (8-0, 4-0 6A-West) have now won 16 consecutive sets and dropped just two sets thus far this season. The Lady Purple'Dogs led 15-4 in each of the first two sets and 17-7 in the third before that one got interesting. Bentonville (4-3, 2-2) got within 20-15 in the third set but Fayetteville bounced back to put the match away.

[Don't see the video above? Click here to watch: https://www.youtube.com/watch?v=d0OHbAfU7Ik]

Fayetteville coach Jessica Phelan has seen her team progress even just through eight matches. Sophomore setter Kennedy Phelan has gotten familiar with more than just Hicks and Flannigan, which she's played with before, Coach Phelan said.

"I feel like we've really developed a lot of offensive weapons," Phelan said. "I think we've got the connection between the setter and the hitter. She was connecting with the kids she had played with before. As the season's progressed she's found better connection with others.

"I feel like the team chemistry has been really solid. I feel like they've done a good job of embracing their roles and going hard in practice."

Phelan liked the way her team served aggressively and spread out the offense on Tuesday.

"I thought we did a good job of keeping the offense balanced, spread out and pushed the tempo," Phelan said. "That started with us kinda serving pretty well. We got a lot of balls we can do that on. All in all, I thought I really solid night for us.

"I was proud of them for zoning back in in game three, I thought Bentonville really pushed back. I thought we had a nice night from the service line and were able to keep some pressure on their offense."

London McKinney led the Lady Tigers, who were without two regulars because of the coronavirus, with six kills. Jamie Myrick finished with a match-high 19 digs.

Southside improved to 5-2 overall and 3-1 in the league.

West called off Tuesday’s match against Springdale Har-Ber and will not play Thursday’s match against Rogers Heritage, as well as matches next week against Fort Smith Southside and Bentonville High. The entire team is now under quarantine, according to Passmore.

Three of those four matches were to be played on the road. All four of them will be ruled as “no contest,” according to the Arkansas Activities Association ruling and will have no effect on the league standings this season.

“We look forward to resuming competition once this quarantine period has expired,” Passmore said.

This comes after West had to cancel Monday’s nonconference match at home against Greenwood.