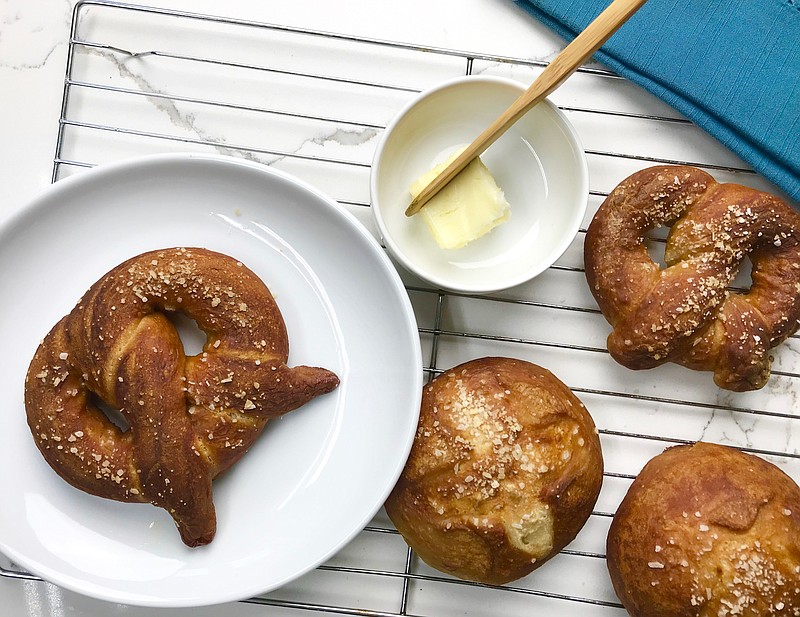 If you think it's the salt or the shape that makes a pretzel a pretzel, you're wrong.

When it comes to food, I try to avoid telling people what's right and what's wrong. But the simple fact is you can't twist a rope of yeast dough into a loop, sprinkle it with salt and deem it a pretzel.

Egg wash won't do it either.

True pretzels get their characteristic color, texture, shine and flavor from an alkaline bath. In Germany, the dough is dipped in a lye solution, however here in the U.S., baking soda often stands in for the lye, as food grade lye can be difficult to obtain.

The boiling water bath is what gives a pretzel its signature chew — the same process minus the alkali is what makes a real bagel so delightfully chewy and shiny.

This extra step might sound like a hassle, but it is required (and pays off in superior flavor) if you're looking to duplicate the kind of pretzels and laugenbrot sold in German bakeries.

I've found that pretzels made with baking soda are reminiscent of the real thing, but not quite. Call me chicken, but I've never been willing to try my hand at using lye. The idea of dipping my food into something used to clean my drains is just too ... I'll leave that to the professionals.

So I was excited to come across a New York Times article (arkansasonline.com/916soda) from 2010 in which the food chemist Harold McGee wrote about baked baking soda. McGee found that heating baking soda transforms it from a weak alkali to a stronger one, making it perform more like lye.

Spread a layer of baking soda on a foil-covered baking sheet and bake it at 250 to 300 degrees for 1 hour. Store the Baked Baking Soda in a tightly sealed jar to prevent it from absorbing moisture from the air. And avoid touching or spilling it on your bare skin or stone countertops. It's not lye, but it's still strong enough to irritate sensitive skin and affect the sealant on natural stone surfaces such as marble or granite.

McGee's instructions for use: Dissolve 1/3 cup Baked Baking Soda per cup of cool water. Submerge dough in solution for 3 minutes, then rinse well with plain water.

I decided to give McGee's Baked Baking Soda a try. It really did come closer to duplicating the flavor of real pretzels, but the method — submerging the dough in the cool water solution for 3 minutes and then rinsing — meant my pretzels weren't pretzel-shaped. They were just blobs with vague twists in the center.

Because I've had good luck with recipes that call for dissolving regular baking soda in boiling water to briefly bathe the shaped dough, I decided to try that with McGee's Baked Baking Soda. My first batch was a resounding failure. I forgot to rinse the dough after boiling it in the beefed-up soda and ended up with inedible, bitter, soapy, disgusting pretzels.

My third attempt proved successful. A brief bath in simmering Baked Baking Soda and a good rinse off before baking produced just the pretzel I was looking for, at least in flavor and texture.

Twisting the dough into a pretzel shape takes a bit of practice, so don't be discouraged if yours don't look picture perfect.

Laugengebäck, German for lye bread, can be formed and baked in a variety of shapes — my favorites are pretzels (brezel), rolls (laugenbrötchen) and loaves (laugenbröt).

And another thing, pretzels are eaten with butter, not mustard. Save the mustard for the sausage.

4 to 5 cups bread flour, plus more as needed, divided use

Make the sponge: In a large bowl, combine 1 cup of the warm water, ½ teaspoon of the barley malt syrup (or molasses) and 1 teaspoon of the yeast and stir to dissolve. Using a wooden spoon, gradually stir in 2 cups of the flour, about ½ cup at a time, and mix well. Cover with plastic wrap and set aside for 2 to 3 hours, or refrigerate for up to 2 days.

Make the dough: Transfer the sponge to the bowl of a stand mixer fitted with the paddle attachment. To the sponge, gradually add the remaining cup warm water, alternating with the remaining teaspoon of yeast, and mix on low speed until the sponge is blended with the water. Add the salt, sugar and remaining barley malt syrup and mix on low to blend. Switch to the dough hook and add 2 cups of the remaining flour, ½ cup at a time, and knead until a sticky dough forms. The dough will form a ball around the hook and pull away from the sides of the bowl, but it could still be stuck to the bottom of the bowl. If the dough does not form a ball around the hook, knead in additional flour, a tablespoon or so at a time, until it does.

Transfer the dough to a lightly floured surface and finish with a few quick kneads by hand until a smooth ball forms. The dough will be quite soft and supple but should not stick to your hands. Place ball in a lightly oiled bowl, cover with plastic wrap and set aside in a warm place to rise until doubled in size, 1 to 1 ½ hours.

Turn the risen dough onto a lightly floured surface and divide into 12 equal portions (about 3 ounces each). For pretzels, shape each one into a thick rope 4 or 5 inches long; for rolls shape each into a ball. Let dough rest for about 10 minutes.

Adjust oven racks to upper-middle and lower-middle positions and heat oven to 425 degrees.

Make the boiling soda bath: Combine ¼ cup Baked Baking Soda or regular baking soda with 6 cups cool water in a nonreactive pot such as a Dutch oven, stirring to dissolve. Bring to a boil over medium-high heat.

While the oven heats and the water comes to a boil, shape your dough.

For pretzels: Working with 1 piece of dough at a time, roll a 22-inch-long (or longer) rope that is slightly thicker in the center and tapered at the ends. Lightly flour the counter as needed if the dough is sticking; if there's too much flour and the dough is sliding around rather than stretching, brush away as much of the excess flour as you can.

Shape the rope into a U with the slightly tapered ends facing away from you. Crisscross the rope in the middle of U, then fold the ends toward the bottom of the U. Firmly press the ends into the bottom curve of the U 1 inch apart, forming a pretzel shape. Transfer the pretzels to the floured baking sheets, knot side up, 6 pretzels per sheet. Cover the pretzels loosely with plastic wrap or dish towels (take care that the towels don't touch the dough) and let rise at room temperature until slightly puffy, 15 to 20 minutes.

For rolls: Using a serrated knife, cut an "x" in the top center of each dough ball. Cover with plastic or a towel and let dough balls rise about 20 minutes.

Working with one or two pieces at a time, using a slotted spoon, submerge each piece of shaped dough into the boiling soda for about 30 seconds on each side. If using Baked Baking Soda, rinse well with plain water. Transfer the dough (knot-side up for pretzels; x side up for rolls) to a wire rack, and repeat with the remaining pieces. Let the dough rest/dry for 5 minutes.

Wipe the flour from the baking sheets and coat each one with about 1 tablespoon oil, or line each baking sheet with a silicone baking mat. (Parchment, my usual go-to for baking, does not do a great job with pretzels.) Transfer the shaped dough to the prepared sheets, knot-side up; x side up, 6 pretzels or rolls per sheet. Sprinkle evenly with coarse salt.

Bake 15 to to 25 minutes, or until deep golden brown, rotating pans halfway through. Transfer pretzels or rolls to wire racks and cool 10 minutes.

Serve warm or at room temperature.