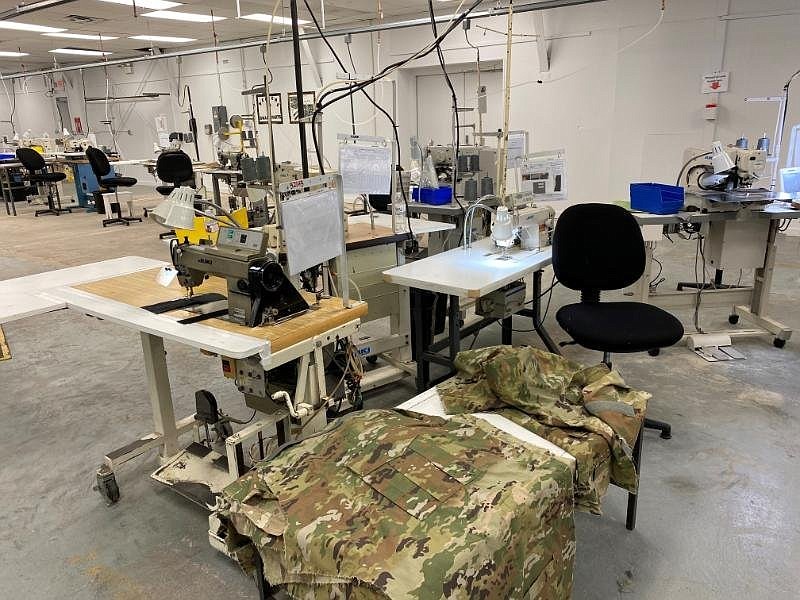 Production on chemical and biological protection clothing for the military started Aug. 17 at ReadyOne Industries. It is located inside the Pine Bluff Arsenal at White Hall. The company will employ about 40 employees by the end of the year. (Special to The Commercial/Deborah Horn)

The Pine Bluff Arsenal has long been associated with the production, storage and incineration of chemical weapons, but it has now made room for a new mission -- chemical and biological protective clothing.

ReadyOne Industries' shop is already up and running on the Arsenal post at White Hall, producing military clothing, with a large portion of its workforce consisting of disabled employees, said Luis Alvarez, ReadyOne Industries CEO and president.

At approximately 25,000 square feet, the facility on the Army post was refitted to the company's needs, and so far, they've hired about 10 employees and hope to build their workforce up to about 40 by year's end.

There are plans for a second shift within the next 12 months, which would double the workforce, Alvarez said last week.

To start, it's producing military uniforms designed to shield soldiers during chemical and biological warfare.

Future plans include a second facility dedicated to personal protection equipment and hiring another 40, which would bring their total employee numbers to about 120, he said.

It's a welcome addition to the community, civic leaders said.

White Hall Mayor Noel Foster said he is happy with every new job created in the city of about 5,000 in southeast Arkansas, but he is thrilled with ReadyOne's potential future employment numbers.

"We had several meetings with the federal government, and they had sufficient manufacturing capacity at the arsenal and offered us incentives," Alvarez said.

The company's partnership is with the Defense Department's Joint Program Executive Office for Chemical-Biological Defense, and was facilitated by SourceAmerica of Vienna, Va.

"We worked diligently for about two years to make this happen," Foster said.

He credits arsenal personnel and the Economic Development Alliance for Jefferson County, as well as Gov. Asa Hutchinson's economic development team, for making it happen.

That was based on the company's financial investment in equipment and the facility, and the number of jobs it will create, Thompson said.

The money, more like a grant, depends on the company fulfilling its five-year commitment. If they close up shop before then, it will be required to repay the money.

Foster said, "It is a great public-private partnership."

The 43-year-old nonprofit organization is based in El Paso, Texas, where it employs about 1,100. There, as here, its mission is "to provide employment opportunities to individuals with significant disabilities in an environment that inspires and nurtures self-determination and success," according to the company.

At White Hall, about 70 percent of the company's workforce will be disabled, selected from civilian and former military ranks. It will also employ nondisabled.

While training disabled can often take longer, Alvarez said, "They usually have lower turnover and stay with us longer."

Alvarez said they are still hiring in White Hall and looking for people both with and without sewing experience.