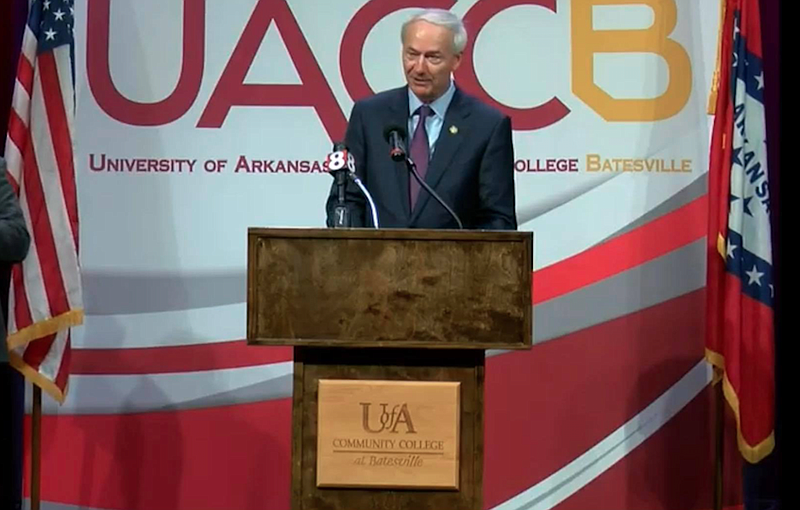 Arkansas Gov. Asa Hutchinson speaks at the University of Arkansas Community College at Batesville on Wednesday in this still of video provided by the governor's office.

Arkansas confirmed 606 new cases of covid-19 on Wednesday, Gov. Asa Hutchinson said, and recorded an additional 95 probable cases from antigen tests, for a combined increase of 701 confirmed or probable cases.

Hospitalizations decreased by two from Tuesday, to 387, Hutchinson said. State Department of Health Secretary Dr. Jose Romero said the number of patients on a ventilator decreased by three to 65.

Romero said the number of active cases on Wednesday was 5,572.

In the previous 24 hours, the state completed 6,360 polymerase chain reaction, or PCR, tests and 529 antigen tests.

Counties with the highest numbers of new cases included Washington with 65, Pulaski with 58, Benton with 37, Faulkner with 31, Jefferson with 29, Miller with 21 and Craighead with 20.

The governor spoke from Batesville in his second news briefing of the week. Although he announced plans last week to move to weekly news conferences, instead of daily, he said he had committed to speaking in Batesville “some time ago.”

He said he anticipates weekly briefings moving forward, though he has also said additional news briefings may be scheduled as necessary.

Gov. Asa Hutchinson and state health officials will provide an update on Arkansas' covid-19 response from Batesville at 1:30 p.m.

The total number of confirmed coronavirus cases reported in Arkansas remained at 70,125 Wednesday morning, according to a state website. The death toll among confirmed cases remained at 1,003.

[Video not showing up above? Click here to view » https://www.youtube.com/watch?v=7iyFww-xj-8]