It also modifies goal for inflation by CHRISTOPHER RUGABER THE ASSOCIATED PRESS | September 17, 2020 at 2:02 a.m. 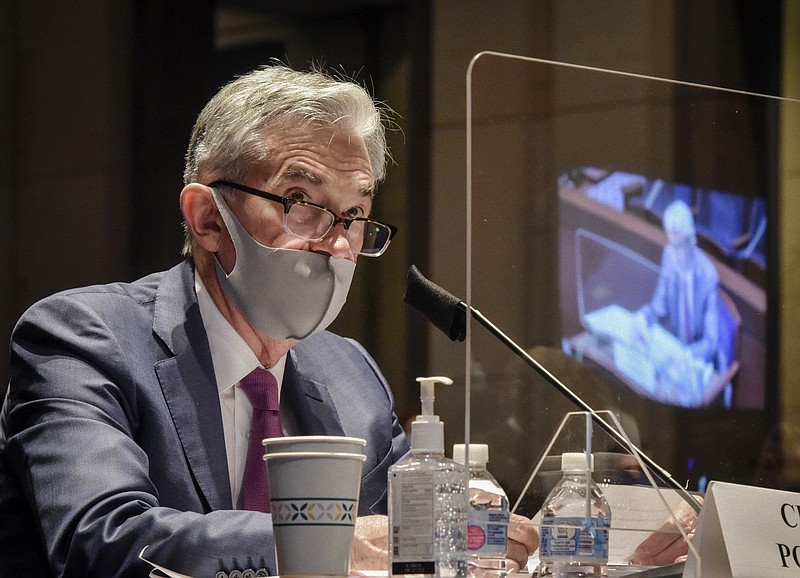 FILE - In this June 30, 2020, file photo Federal Reserve Board Chairman Jerome Powell, reflected in the sneeze guard set up between himself and members of the House Committee on Financial Services, speaks during a hearing on oversight of the Treasury Department and Federal Reserve pandemic response on Capitol Hill in Washington. The Federal Reserve adjusted its inflation target to seek price increases above 2% annually, a move that will likely keep interest rates low for years to come. The Fed on Wednesday, Sept. 16, also left its benchmark short-term rate unchanged at nearly zero, where it has been since the pandemic intensified in March. (Bill O'Leary/The Washington Post via AP, Pool)

WASHINGTON -- The Federal Reserve expects to keep its benchmark interest rate pegged near zero at least through 2023 as it strives to accelerate economic growth and drive down the unemployment rate.

The central bank also said Wednesday that it will seek to push inflation above 2% annually. The Fed left its benchmark short-term rate unchanged at nearly zero, where it has been since the coronavirus outbreak intensified in March.

The Fed's moves are occurring against the backdrop of an improving yet still weak economy, with hiring slowing and the unemployment rate at 8.4%.

Still, at a virtual news conference with reporters after the statement, Fed Chairman Jerome Powell said the economy has recovered more quickly than the Fed had expected. The Fed updated its forecast for gross domestic product to a decline of 3.7%, compared with a June forecast of a 6.5% drop. The Fed projected an unemployment rate at the end of the year of 7.6%, instead of the 9.3% it projected in June.

But Powell acknowledged the economic outlook remains highly uncertain and depends heavily on the ability of the U.S. to get control of the pandemic.

"A full economic recovery is unlikely until people are confident that it is safe to reengage in a wide variety of activities," Powell said.

During his news conference, Powell, as he has in the past, supported more spending by Congress to help the economy recover. Congress is deadlocked on more financial relief because of disagreements between Democrats and Republicans on the size of an aid package.

"My sense is that more fiscal support is likely to be needed," Powell said. "There are still roughly 11 million people out of work because of the pandemic."

The Fed's statement formalized a change in its policy toward inflation first announced by Powell last month.

[Video not showing up above? Click here to view » https://www.youtube.com/watch?v=Cwb81O3aoYU]

The change reflects a growing concern at the Fed that in recessions, inflation often falls far below 2%, but it doesn't necessarily reach 2% when the economy is expanding. Over time, that means inflation on average falls further from the target. As businesses and consumers come to expect increasingly lower inflation, they act in ways that entrench slower price gains.

The Fed prefers a little inflation because that gives the central bank more room to cut or raise short-term interest rates.

The Fed last month made two other key changes to its strategy framework after its first-ever public review of its policies and tools, which it debuted in November 2018.

Powell said last month that the Fed will place greater weight on pushing unemployment lower and will no longer raise interest rates preemptively to forestall higher inflation when the unemployment rate is low. Instead, it will now wait for evidence that prices are rising.

Fed officials have acknowledged that economic models that predict higher inflation when unemployment is very low have been wrong, particularly since the 2008-09 recession.

The Fed also said last month that its objective to maximize employment is "a broad and inclusive goal." That language suggests that Fed officials will consider the unemployment rates of Black and Hispanic people and other disadvantaged groups as well as the overall jobless rate when contemplating interest rate changes, something the Fed has never considered before. Democrats in Congress have introduced legislation that would require the Fed to consider racial inequities as it makes policy decisions.

The Fed said Wednesday that it will continue purchasing about $120 billion in Treasury notes and mortgage-backed securities a month, in an effort to keep longer-term interest rates low. Since March, the Fed has flooded financial markets with cash by making such purchases, and its balance sheet has ballooned by about $3 trillion. But with the yield on the 10-year Treasury already at just 0.67%, economists worry that the Fed's bond purchases will have a limited effect going forward.

Still, the Fed's moves to stabilize financial markets have contributed to the stock market's rally to new highs after plunging in February and March. On Wednesday, stocks got a short boost from the Fed's projections before turning lower. Still, market analysts liked what they heard from the central bank.

"A better economy and a dovish Fed, that is a nice combo," said Ryan Detrick, chief market strategist for LPL Financial.

On Wednesday, the latest economic report seemed to support Powell's view of an economy on the mend but not fully healthy. The Commerce Department said retail sales rose 0.6% in August, the fourth straight gain but the slowest since sales started growing again in May. The figure suggests that the end of a $600 supplemental weekly unemployment payment weighed on spending.

Information for this article was contributed by Martin Crutsinger and Alex Veiga of The Associated Press.