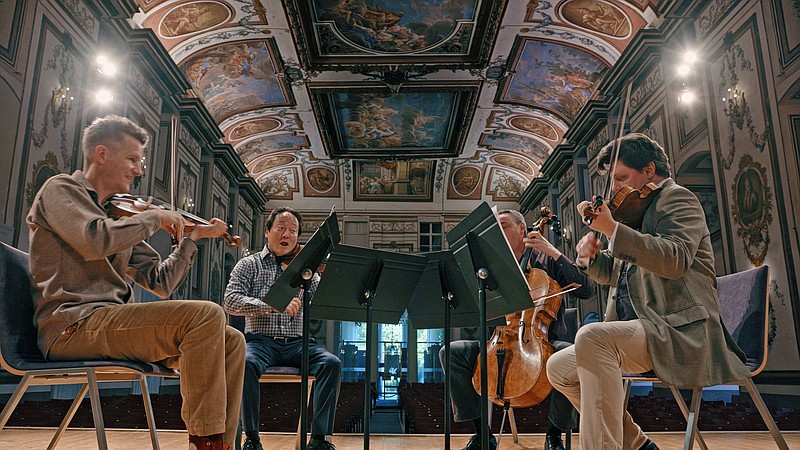 Between the pandemic-driven mass migration of various orchestras and organizations to online programming, the rise of specialized classical streaming services such as Idagio and Primephonic, and video platforms including Medici.tv and Marquee.tv, and the ever-expanding (if chaotic) offerings of YouTube and Spotify, classical music has never been easier to get.

And yet for millions of potential listeners, this hasn't made classical music any easier to get. Casual listeners trying to get their bearings amid this overwhelming online abundance have fewer and fewer guides to help lead them across the widening interpretive gap between the music and its audience.

But for those listeners, novice and not, seeking a way into classical music that swirls together historical and contemporary context, mixes deep scholarship and live performance, and kind of feels like an episode of "Taste the Nation" but for composers, you might try the PBS docuseries "Now Hear This," which premieres its second season at 8 p.m. Friday.

Written, directed and produced by filmmaker Harry Lynch and hosted by Mexico City Philharmonic Orchestra principal director Scott Yoo, "Now Hear This," presented by "Great Performances," is ostensibly a show about composers. (Along with Richard Lim, Lynch and Yoo are also executive producers.)

Each episode, however, manages to turn its exploration of a single subject into a hybrid of travelogue, mystery, history, cultural study, documentary and performance — all with spiffy, audiophile-tickling production values and intricate webs of narrative that connect composers across episodes and eras. As one might expect, it feels expertly conducted.

This may be due to Yoo's own investigative approach toward his favorite music and his knack for unpacking its intricacies. Lynch met Yoo at the University of Texas at Austin's Butler School of Music, where Yoo was hosting an event he normally held as part of Festival Mozaic in San Luis Obispo, Calif., which he directs. "Notable Encounters" was imagined as "a museum docent's guide" to a particular piece of music — in this case, the trios of Brahms and their metaphorical relationship to his life.

Lynch immediately took to Yoo's engaging, jargon-free, dot-connecting approach to potentially esoteric musical ideas. There, in an audience of about six, he saw a show forming before his eyes.

"He said, 'Hey, I'm a producer for PBS, and we need to make a TV show.' And I just kind of laughed it off," Yoo says on a Zoom call from his home in Columbia, Mo. "I thought he was joking. I didn't even give him my number."

Weeks later, Lynch managed to track him down anyway.

"[Yoo] and I started to brainstorm on what might we do to try to make this into the kind of show that anybody would want to watch," Lynch says via Zoom from Austin, Texas. "Classical music is suffering right now. The audience is aging, a new audience is not replacing it. What can we do to try to help with that? How can we introduce classical to a new generation while giving existing fans a new way to love their music? Honestly, we found the inspirations through cooking shows."

Yoo may cut a far less gruff figure than Anthony Bourdain (stylish leather jacket aside), but you can see the late chef, author and documentarian's influence in Yoo's globe-hopping history lessons. His is a genuine and insatiable curiosity, and the show's threads feel like natural footpaths across wide swaths of musical terrain. By demystifying the music, Yoo remystifies it.

In its first season, he visits Venice and Bergamo, Italy, for Vivaldi; Berlin and Leipzig, Germany, for Bach; Madrid and Tangier, Morocco, for Scarlatti; then doubles back to Italy for Handel and the four formative years the composer spent there. This second season will advance from that Baroque batch into the Classical period via Haydn, Schubert, Mozart and Beethoven. A third season will focus exclusively on American composers.

But another major element of the show's highly watchable formula is the way it draws clear connections between music and culture, grounding otherworldly compositions in the real lives of its composers and, centuries later, its listeners.

Thus, a current of folk music connects Scarlatti's episode with Haydn's; Vivaldi and Bach open conversations on opera and dance that extend throughout the series. And lest it all dwell too much in the past, the forthcoming Schubert episode centers not just on the composer's own prolific youth but also on a host of contemporary musicians, all younger than Franz's 31 years. (It also includes a performance of "Ständchen" from bass-baritone Phillipe Sly and guitarist John Charles Britton that's worth tuning in for all by itself.)

"To me ... it's not about getting somebody to hear, say, Schubert's last piano sonata or Schubert's 'Cello Quintet,'" Yoo says. "That's nice, but it's more about shifting classical music's place in society."