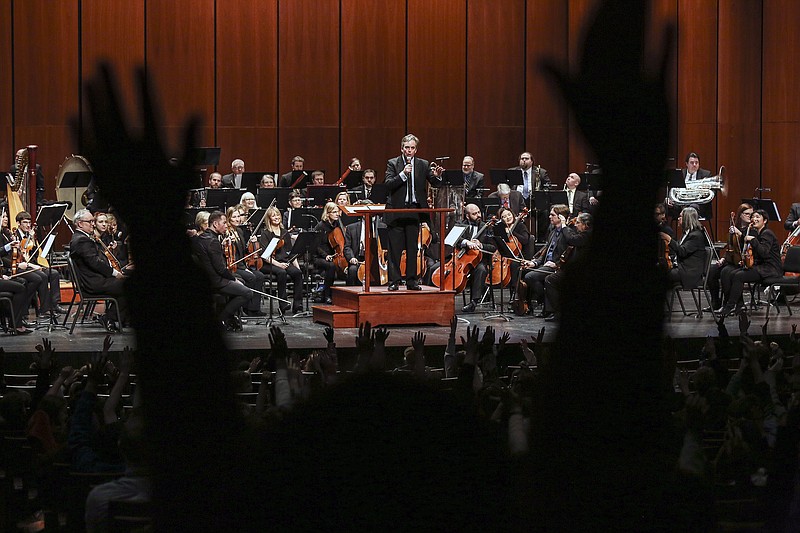 FILE — Geoffrey Robson, interim artistic director of the Arkansas Symphony Orchestra, stands at the podium for a children's concert at Robinson Center Performance Hall in this Feb. 8, 2019, file photo.

LITTLE ROCK -- The coronavirus pandemic is causing the Arkansas Symphony Orchestra to shift the schedule it announced a little more than a month ago, postponing its conductor search and its entire Pops Live schedule to the 2021-22 season and paring down its spring Masterworks lineup to include shorter concerts with smaller-scale works.

The orchestra announced a revised season Aug. 8, moving its slate of fall concerts to the spring. Now, citing pandemic-related restrictions to the number of players the orchestra can field in each concert, as well as the limits to the size of audiences, the orchestra has moved its slate of five 2020-21 guest conductors, some of whom would be candidates for the currently vacant music director's spot, to 2021-22.

"Our audience would also be very limited," the orchestra said in a news release. "It is very important to us that our full orchestra and audience get the opportunity to experience every guest conductor."

Former Music Director Philip Mann left the podium after the 2018-19 season. Geoffrey Robson has been "running" the orchestra as interim artistic director.

The orchestra, in establishing criteria for the new hire, explained in a release earlier this year that they were keeping the names of potential candidates under wraps.

"Our search is designed to attract the best conductors possible for our community," the release said. "Since no one wants to lose a contest, we are keeping the candidate names confidential."

The pool also could include the guest conductors who appeared during the current 2019-20 season. The orchestra has surveyed patrons after each concert for their reaction to the conductor and "to let us know if they would like to see a conductor back."

Board Chairwoman Jan Hundley, who has been sitting with board members and orchestra musicians on the orchestra's music director search committee, said an "artistic leadership task force" worked hard to establish the criteria for a new music director, including nailing down whether that's what the orchestra actually needs. She said the musicians, while they have enjoyed working with a series of varied musical viewpoints, ultimately want a consistent person on the podium.

Among the issues: How many weeks the Arkansas Symphony would require of the music director's time each season. For the first time in the orchestra's more than 50-year history, the incoming conductor's contract won't require that he establish a local residence.

"We are so fortunate to have the flexibility to make these exciting changes," Executive Director Christina Littlejohn said. "We remain committed to serving the community, continuing to employ our musicians and staff, and to being strong when the pandemic passes."

Meanwhile, Robson is in the process of creating "a new, reimagined spring series of six Masterworks concerts," dates to be announced, that, according to the news release, "will contain inspiring works that would ordinarily not be [possible] on the Masterworks stage simply due to scale."

His proposed programs for the first three concerts:

Concert 1: Sergei Prokofiev's "Symphony No. 1," "Classical"; "Sinfonia Concertante" in E-flat major for violin and viola, K.364, by Wolfgang Amadeus Mozart, with soloists to be announced; and the final movement of Mozart's "Symphony No. 41" in C major, K.551, "Jupiter"

Concert 2: George Walker's "Lyric for Strings," Anne Clyne's "Within Her Arms" and Ralph Vaughan Williams' "Fantasia on a Theme by Thomas Tallis"

Concert 3: "L' Histoire du Soldat" ("A Soldier's Tale") by Igor Stravinsky, to be semi-staged in collaboration with another local arts organization, with performers to be announced.

The orchestra is also citing pandemic restrictions for rescheduling its entire slate of Pops Live! concerts.

"We are also still learning what will be safe on stage, and the health and safety of our musicians, audience, and staff is our main priority," according to the news release. "Rather than present an inferior presentation to our Pops Live! audience, we have rescheduled the entire program until the '21-'22 season."