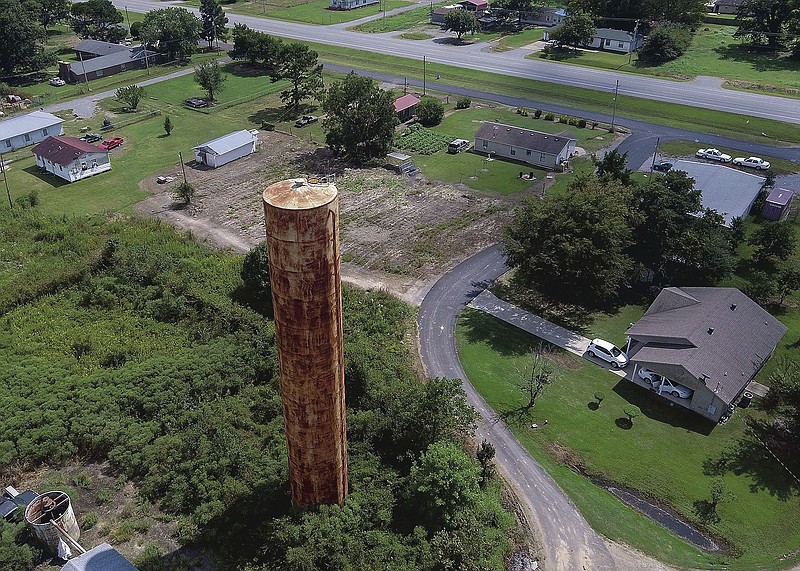 A rusted water tower marks the town of Allport Wednesday Sept. 16, 2020 in Lonoke County. The town could be the first municipality dissolved by the Legislative Joint Auditing Committee under a law passed in 2017. See more photos at arkansasonline.com/917allport/. (Arkansas Democrat-Gazette/Staton Breidenthal)

ALLPORT -- For the first time since a relevant law was enacted in 2017, the Legislative Joint Auditing Committee has started the process of trying to dissolve a municipality, abolish its offices and return the territory and its residents to the county in which the municipality is located.

The municipality at issue is Allport in Lonoke County. The town's population is 127, based on a five-year average in 2018 from estimates of the U.S. Census Bureau. The agriculture-dependent community sits along U.S. 165, between England and Stuttgart.

Act 712 of 2017 -- sponsored by Sen. Jimmy Hickey, a Republican from Texarkana -- created a procedure for the revocation of a charter of a municipal corporation as a result of its noncompliance with state municipal accounting law under certain conditions.

The Legislative Joint Auditing Committee voted Friday to begin the process of revoking Allport's charter under Act 712 and authorized the notification of the attorney general and governor.

Act 712 requires the attorney general's office, based on that notification, to file pleadings in the 6th Judicial Circuit Court to revoke the charter.

"Whether your charter is revoked or not turns on compliance with [Arkansas Code Annotated] 14-59-117, which in turn enforces the municipal accounting law," said Frank Arey, staff attorney for Arkansas Legislative Audit.

"General speaking, that is a set of recordkeeping," he told lawmakers on the audit committee. "This is how you do checks; this is how you keep warrants; this is who needs to sign off on these documents. It is all making sure that the municipality performs its basic functions properly."

Once informed of the municipality's failure to comply with the required accounting, Act 712 requires a circuit judge to revoke the charter.

Upon a circuit judge revoking Allport's charter, "essentially what would happen is this land will go back being county territory and the county will be responsible for services," Arey said.

Within five days of the receipt of the judge's revocation order, the governor is required to appoint a qualified receiver for the extinct municipal corporation.

It appears records that should have been kept during the year aren't prepared until after legislative auditors ask for them, she said.

So Steel asked how during the course of the year, if there are no bank reconciliations or journals, the governing body is supposed to make informed decisions regarding finances.

Steel said Tuesday the committee sent a letter in November 2017 to Allport officials they were in substantial noncompliance with state municipal accounting law and had 60 days to comply.

In April 2018, the Legislative Joint Auditing Committee notified state Treasurer Dennis Milligan to place 50% of Allport's state turnback money into escrow. The money was to be held there until the committee reported Allport has substantially complied with municipal accounting law, according to the state treasurer's records.

On July 2, 2018, Randy Dophin resigned as Allport's mayor and Ivory Gaston was appointed to replace him after resigning as police chief. Porsche Farmer was the recorder/treasurer, according to Arkansas Legislative Audit's financial and compliance report for Allport in 2018.

In September 2018, the audit committee told Milligan to withhold all state turnback money from Allport until the town's accounting records complied substantially with state law, the treasurer's office records show.

In January 2019, the committee notified Milligan that Allport forfeited all of its escrowed money, which were to be redistributed among all other municipalities under state law, according to the treasurer's office records.

So far, $5,332 has been forfeited from Allport and redistributed to other municipalities, said Stacy Peterson, Milligan's spokeswoman.

According to the Arkansas Legislative Audit website, Allport's latest financial and compliance report is for the year that ended Dec. 31, 2018.

But the report showed Allport had significant balances in other funds and was delinquent in payments to the IRS, Arkansas' then-Department of Workforce Services and a regional waste treatment district, leaving the general fund with a $30,926 deficit and the street fund with a $22,824 balance on Dec. 31, 2018.

Gaston, who resigned as mayor last year after a year in the post, said Wednesday he believes starting the process of dissolving Allport is "a bad thing for the city."

"I just think it is a bad thing for a city not to be a city" and will waste the time officials spent getting it incorporated, he said.

Some people have called Allport a speed trap over the years, but Gaston disputed the allegation.

In 1967, led by Johnnie Gay, leaders of Allport succeeded in incorporating the town, according to the Encyclopedia of Arkansas.

Gay was elected Allport's first mayor. Gay told the then-Arkansas Gazette the town incorporated to be a more effective bargaining force for improvement, negotiating with state and federal government officials. Incorporation did lead to money from the state government, helping the new town install street lights and buy a police car and a road grader. The town also sought its own water system (after declining an offer from Humnoke to be included in that city's water system) and negotiated with the School District to buy an abandoned building.

Asked if he shares some of the blame for Allport's noncompliance with state law, Gaston said town officials were on the verge of getting help from Arkansas Legislative Audit and the Municipal League to fix the problems before he resigned as mayor.

He said he resigned last year because "it was too much going on at the time" and he didn't get enough support from other officials.

Rep. Roger Lynch, a Republican from Lonoke whose district includes Allport, said Wednesday he wasn't aware the Legislative Joint Auditing Committee voted Friday to begin the process of dissolving Allport. He said he doesn't serve on the committee.

"I know they have been having a little trouble with their town," he said. "No one called me about it."

Hickey said he sponsored the bill that became Act 712 because some cities have repeatedly violated the state's municipal accounting law, and the only recourse for the Legislature had been to strip their state turnback money. 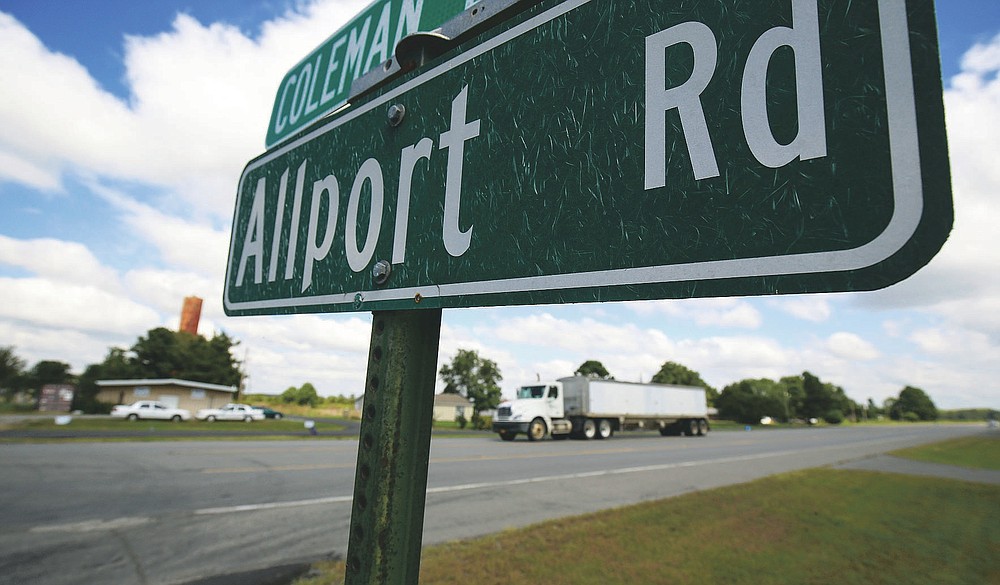 A truck passes through the town of Allport in Lonoke County on Wednesday, Sept. 16, 2020. See more photos at arkansasonline.com/917allport/. (Arkansas Democrat-Gazette/Staton Breidenthal)
ADVERTISEMENT