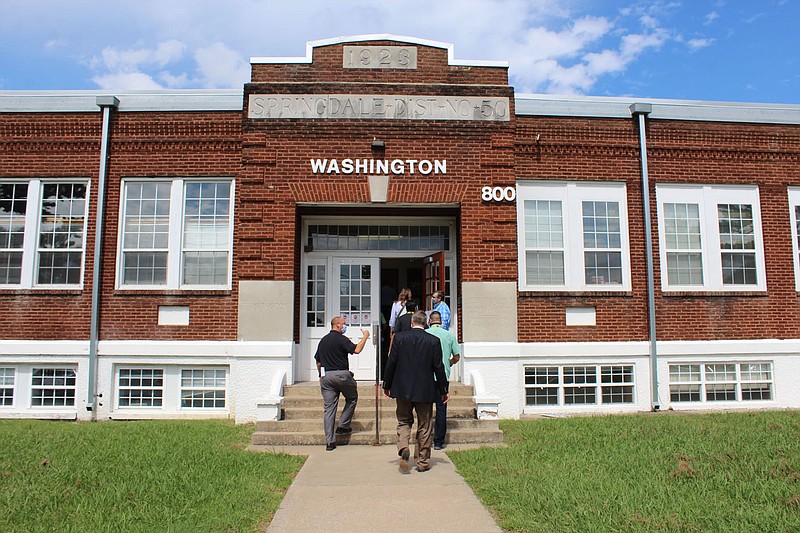 Springdale School District board and staff members enter a district support services building at 800 E. Emma Ave. on Tuesday, Sept. 16, 2020 during a work session to evaluate how the district is using its buildings and properties. (NWA Democrat-Gazette/Mary Jordan)

SPRINGDALE -- The School Board discussed Wednesday how the district may most-efficiently use some of its properties and buildings.

About 14 board and district staff members attended the work session, which included a visit to several properties the district may want to take off its books and a discussion about repurposing an elementary school.

"It's just the start of the conversation," said Jared Cleveland, superintendent, noting no formal decisions have been made to sell or repurpose any district properties.

Several properties that were donated to the district are also under consideration for potential sale, Cleveland said.

Cleveland asked the board to also consider possibly repurposing Lee Elementary School, 400 Quandt St., for use as something other than a school to allow the district to consolidate staff from several district satellite administrative buildings into one location.

Lee was built in 1951 and is the district's oldest and smallest school at 46,761 square feet, Cleveland said. The school is also landlocked, which prevents any further growth for the building, he said.

The building's limitations will soon make it too out-of-date to be a functional school, said Justin Swope, Lee principal.

"I think it makes perfect sense," said Randy Hutchinson, board vice president. "I love Lee, but it probably needs to be repurposed."

In the event Lee is repurposed, Cleveland said the school's approximately 400 kindergarten through fifth-graders may be absorbed into Monitor, Bayyari, Linda Childers Knapp, Jones and George elementary schools.

"Those schools could accept those students without really having to do anything," Cleveland said.

Other options for district students include opening a new elementary school on the corner of East Fletcher Avenue and South Barrington Road in Tontitown, he said.

The approximately 90,000-square-foot building is estimated to cost about $21.5 million to complete and will serve some 820 students from kindergarten through fifth grade, Cleveland said.

Construction on the school is set to begin in October and could conclude as early as August, he said, adding he'd want to repurpose Lee and open the Tontitown school at about the same time.

Swope expressed confidence in the staff and students of Lee to make it through any potential transitions.

"We can do this," Swope said. "That's the school mantra."

Next steps for the district include assessing the properties and examining the legalities of any potential sales, Cleveland said.

"We just have to look into every single piece in its own way, because each piece could have to be addressed differently," he said.

District staff is apt to have some sound answers for the board's decision making in December or January, said Cleveland.

Springdale’s School Board meets at 5 p.m. on the second Tuesday of the month at 804 W. Johnson Ave. The live streams of the meetings are available at https://www.youtube.com/user/SpringdaleSchoolsTV .