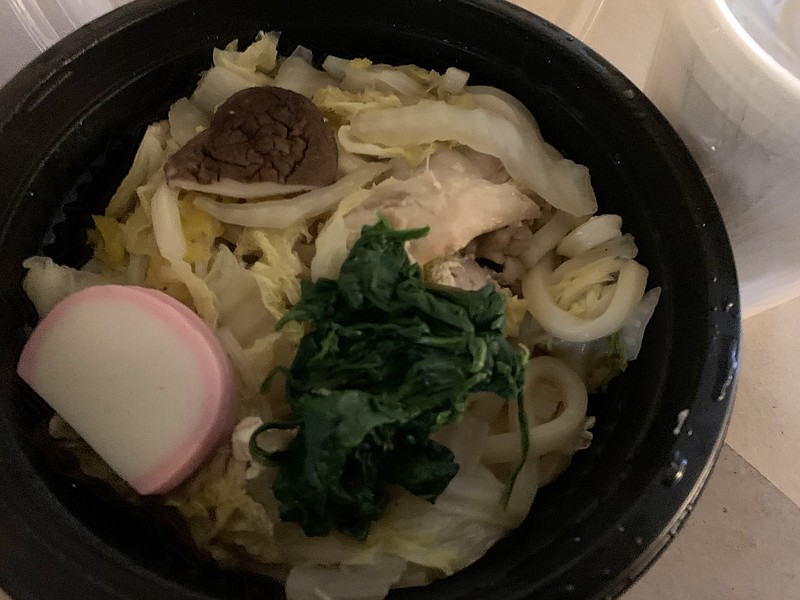 When the evening meal is spread out against the sky …

With apologies to T.S. Eliot and J. Alfred Prufrock, we’re continuing our series of takeouts from area restaurants, revisiting old favorites (some of them, we confess, unjustly neglected) and finding potential new ones.

As has been our custom and rule, we’ve been avoiding chains in favor of locally owned operations. We’ve mostly remained within a “still hot as we trot” radius of the home we’ve been working from, and we pay upfront for all meals.

WHAT WE GOT: Nabeyaki Udon ($13.50); Shumai ($5.50). There are at least two dozen Japanese restaurants-slash-sushi bars in the Central Arkansas market, but this was the first. And when it comes to some of the core Japanese dishes, we’d still put it right up there with the best. Case in point: our Nabeyaki Udon, a soup bowl of thick wheat noodles topped with vegetables, chicken, slices of hard-cooked egg and a great big mushroom cap. Once we added the rich broth, packaged separately (and wrapped in plastic to prevent on-the-way-home spills), it was so good we didn’t miss the tempura shrimp, which the menu promised and which would usually be part of the dish. The shumai, a half-dozen steamed crab dumplings, were a little mushy and needed the dab of wasabi-mustard on the side to avoid being, well, dull.

HOW IT WENT/HOW IT’S GOING: Mt. Fuji only recently reopened for dine-in service, and we happened to be in the neighborhood, so we dropped in to place our order. We didn’t realize, however, that we would have a 40-minute wait. That might be in part that there were already at least a half-dozen to-go and third-party delivery orders ahead of us, not to mention the orders for a couple of couples dining in, which was unquestionably straining the kitchen. 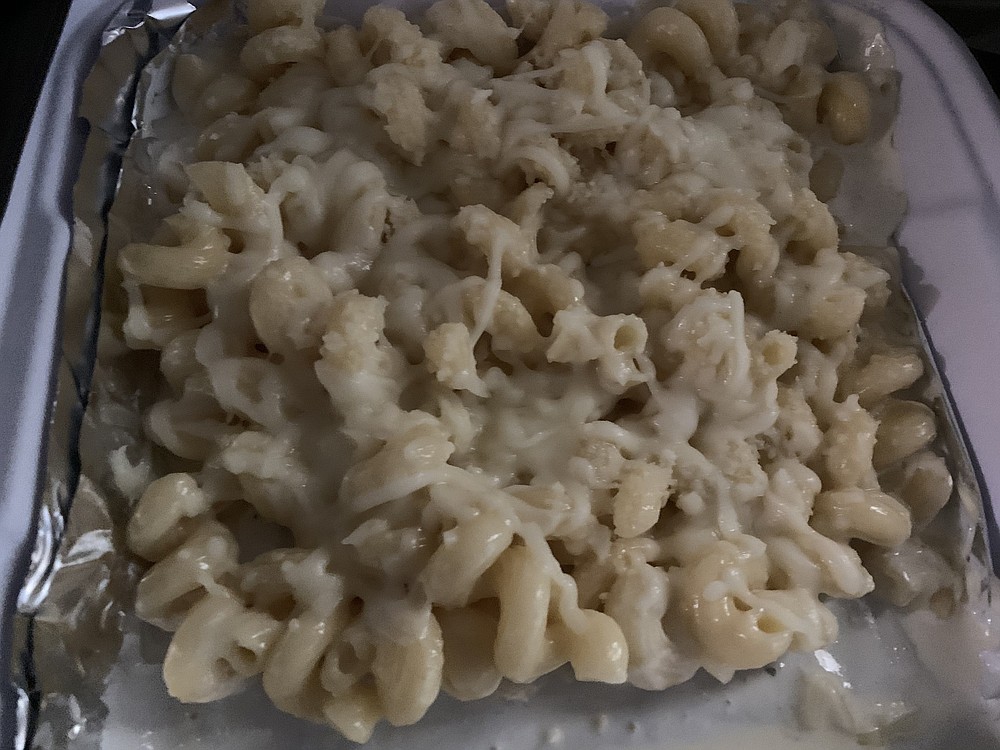 Boursin Mac & Cheese is listed among the "small plates" on the menu at So Restaurant-Bar, but there's nothing small about the portion size. (Arkansas Democrat-Gazette/Eric E. Harrison)

WHAT WE GOT: Mean Joe Green’s French Onion Soup ($14); Boursin Mac & Cheese ($14). So has been closed much of the summer, and when it reopened the chef decided it was the perfect time to introduce a new menu.

We did pause and dither before we decided to throw financial caution to the winds and order the soup, which to the best of our feeble memory is the most we’ve ever paid around here even for haute-cuisine onion soup. But it just looked too good to pass up. The broth featured perhaps fewer onions than we expected — made, according to the menu, with aged beef stock and port — but we were well rewarded nonetheless. Assuming that the pretty photo on their Facebook page is accurate, as with most onion soup offerings, it comes in a pottery vessel with crouton(s) in the broth and cheese, in this case, Swiss, not Gruyere, melted over the top. The DYI to-go version was a lot more prosaic: a big round plastic container held the broth, with a passel of house-made, crisp buttered ciabatta croutons and a container of shredded cheese in a separate bag. The cheese melted in the hot soup to form a gooey clump, not on top but at the bottom, but we got a similar effect.

Boursin Mac & Cheese is among the “Small Plates” but there was nothing small about our portion, cavatappi pasta (sort of like curlier, longer macaroni) thoroughly coated with a mild, very slightly garlicky cream and Gournay cheese sauce but with plenty of shredded sharper cheese to give it an additional kick. (You can add crab or shrimp for $7 or lobster for $9, but it worked out pretty well without.)

HOW IT WENT: We placed our order by phone — it was ready in the 20 minutes it was promised and we picked it up and paid for it at the bar.

HOW IT’S GOING: The restaurant is open on a limited basis for dine-in and carry-out service for dinner Wednesday-Sunday. There was one large party in the main dining room when we arrived. 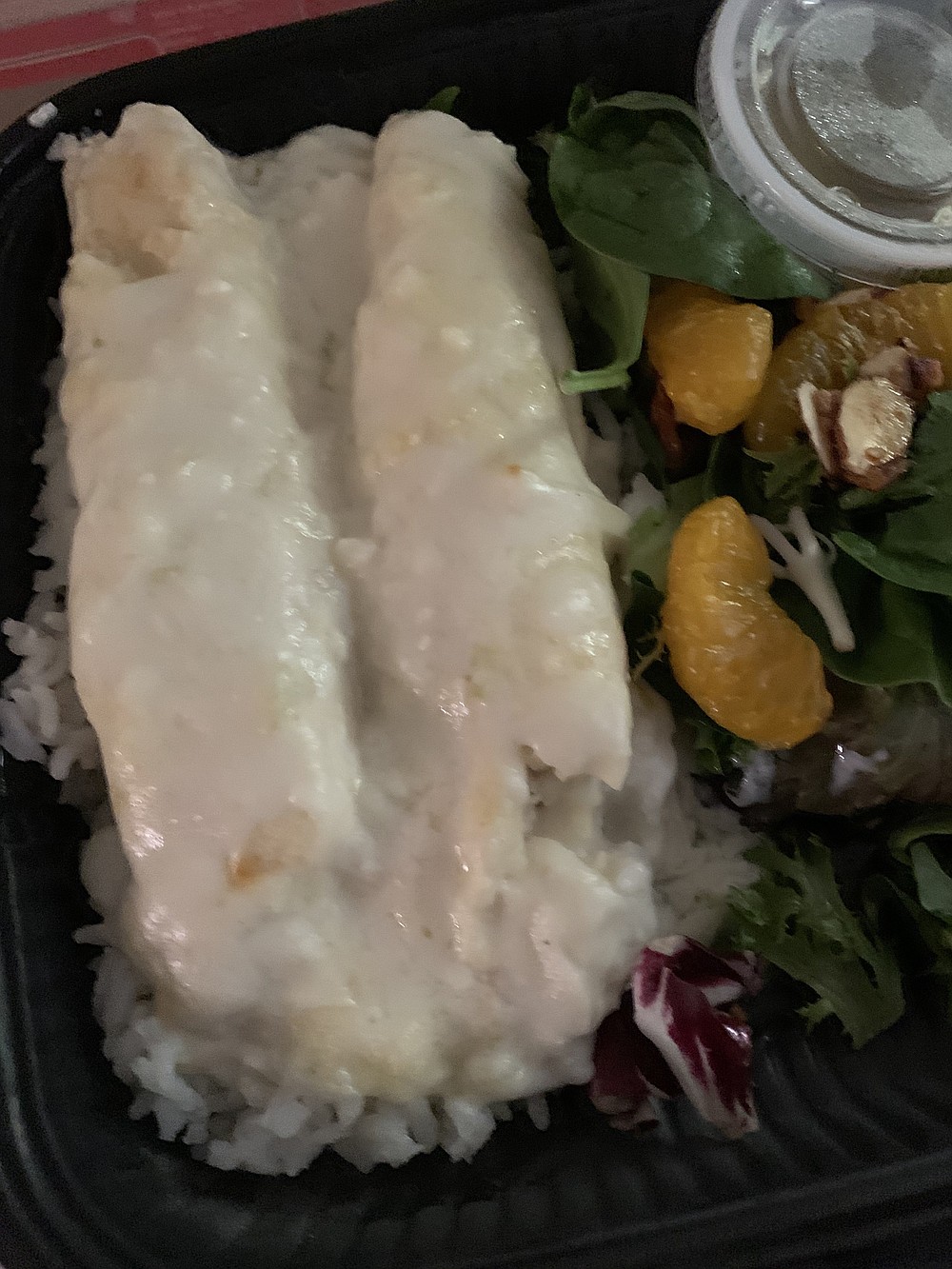 WHAT WE GOT: Panquecas de Frango ($18). This is one of our favorites here, house-made, medium-thin crepes rolled with shredded chicken, cream cheese, fresh herbs and spices in a choice of mild Catupiry cheese or marinara sauce — we chose the former, but one of these days we’ll try the latter. It’s served over rice. On the side is the restaurant’s mista salad of mixed mostly field greens, garnished with slivered almonds and Mandarin orange slices, with a little cup of lively vinaigrette. The crepes and their plate presentation weren’t as pretty as they were the last time we dined in, but they tasted just the same. So did the salad. We inhaled both with vigor.

HOW IT WENT: Our phone order was ready within the 15-20 minutes we were told it would take. We paid when we got there.

HOW IT’S GOING: There were a couple of occupied tables in the now-open dining room at lunch and a handful of to-go orders awaiting pickup. The restaurant was closed for several days last week after management learned of possible employee exposure to covid-19, reopening Friday after all the employees were tested.

WHAT WE GOT: Kabab Roll ($5.99) and Papdi Chaat ($5.99); mango lassi ($2.95). Handi, which took over the space occupied by a previous Indian-Pakistani restaurant called Mehfil, has a wide and varied menu, though not all of it with dish descriptions, which could make it harder for those not familiar with this particular type of cuisine to figure out. They do serve chaat, a class of Indian street food, which has only been available here sporadically. So we chose a couple of dishes from the menu’s “chaat corner” that were inexpensive but quite filling and enjoyable. The burrito-like Kabab Roll consisted of sikh kebab (that’s the menu spelling; we chose beef over chicken and veggie) with veggies and a tangy homemade sauce rolled in a flatbread wrap and crisp-fried. The Papdi Chaat was similar to nachos, chutneys, veggies (including chickpeas and lentils) and yogurt with crisp puris (flatbread chips). The roll was hot; the other was cold, with the bottom of the aluminum pan almost freezer-cold. Our mango lassi, a milkshake-like concoction of mango and yogurt, was well balanced, not too sweet and not too tart.

HOW IT WENT: The dining room is open, so we placed our order on a walk-in basis and waited about 10 minutes for it in the very nice anteroom.

HOW IT’S GOING: There was one dine-in customer within our range of visibility. The young woman who took our order seemed glad to see us. 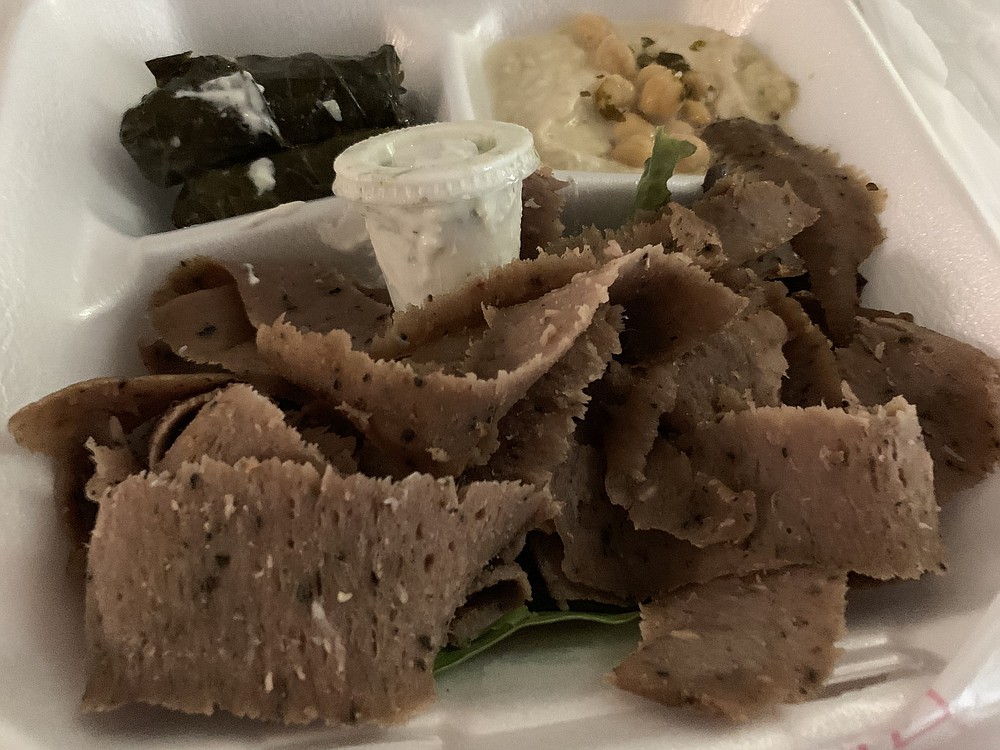 We chose dolmas and baba ghanoush as side dishes on our gyro plate from Al Seraj. (Arkansas Democrat-Gazette/Eric E. Harrison)

WHAT WE GOT: Gyro plate ($10.99). Al Seraj, pre-pandemic, offered a nice lunch cafeteria-buffet; now we had to order over the counter while a nice young man assembled it for us. There are three upright rotisseries, two with shawarma — beef and chicken — and one with gyros, a beef-lamb composite. The nice young man started up the gyros rotisserie long enough for it to heat the meat, then shaved a large portion of thin strips from the saddle just for us, laying them over a bed of dark lettuce. We chose as our two sides dolmas (grape leaves stuffed with herbed/spiced rice), which were cold but exceedingly tasty, and baba ghanoush (roasted eggplant whipped with tahini, garlic, lemon juice and olive oil), garnished with chickpeas, which was of considerably smoother consistency than we’re used to, but with that inherent smoky flavor. Our server added a little plastic cup of tzatziki (cucumber-yogurt dip), which was not quite enough to cover the entire quantity of gyros.

HOW IT WENT/HOW IT’S GOING: There were no other customers late in a recent lunch period. What had once been a dining room has been turned into a Middle Eastern market, not unlike, but not as large as, that at Zam Zam, Al Seraj’s competitor a few blocks south on North Rodney Parham Road. There is an online order system via the website, but it isn’t working; they’re only taking phone and walk-in orders.