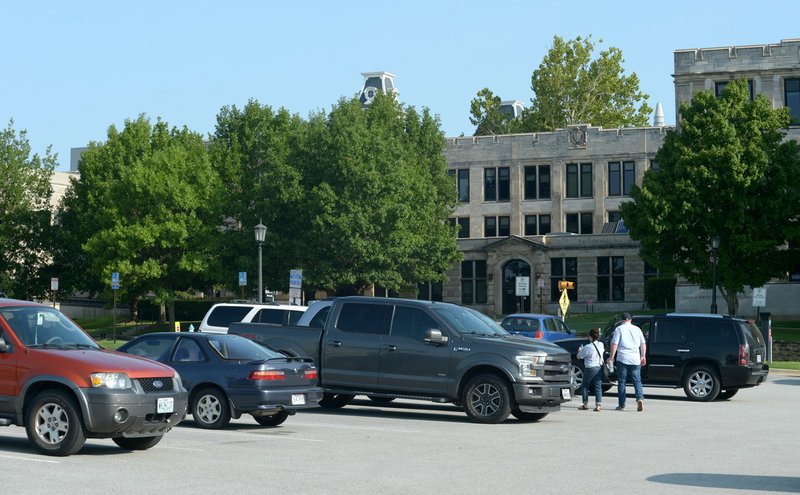 NWA Democrat-Gazette/ANDY SHUPE Visitors walk from their cars Saturday after parking in Lot 71 on the University of Arkansas campus in Fayetteville. The University of Arkansas, Fayetteville announced plans a year ago to begin using car-mounted cameras to enforce parking regulations, but the system has not been installed despite records showing nearly $300,000 made in payments to NuPark.

FAYETTEVILLE -- A Little Rock attorney is representing his daughter in a class-action lawsuit alleging constitutional rights to due process are violated in the appeals process for parking tickets at the University of Arkansas.

Elizabeth Ann Corbitt, a freshman at UA last fall, was fined $100 and had her car towed after parking in a reserved lot, according to court documents.

The lawsuit states: "Traffic citation recipients are forced to pay the fines, pay a $10 appeal fee and explain why their reason is valid for a hearing in violation of their constitutional rights of due process and adequate notice."

Corbitt filed the lawsuit Sept. 4 in U.S. District Court in Little Rock. The board of trustees for the University of Arkansas System is the defendant in the lawsuit, with six of 10 trustees listed by name.

Chris Corbitt said he listed by name the six trustees who are attorneys.

"I want them to hopefully take a look at this lawsuit and say, 'Oh gosh, this is like [Constitutional Law] 101, what in the world are we doing to our students here?'" he said.

Mark Rushing, a UA spokesman, said the university is "confident that our parking policies are fair towards everyone and fully comply with the law."

Rushing stated parking policies "are intended to ensure that the university can provide quality parking facilities that meet the needs of the campus community and visitors."

Chris Corbitt said with the class-action lawsuit, a goal is to get money back for those ticketed. The lawsuit states those included in the class action would be "students and non-students issued a ticket by the University of Arkansas within the last three (3) years."

The lawsuit also asks the court to step in and stop the university from issuing parking violations. A jury trial is requested.