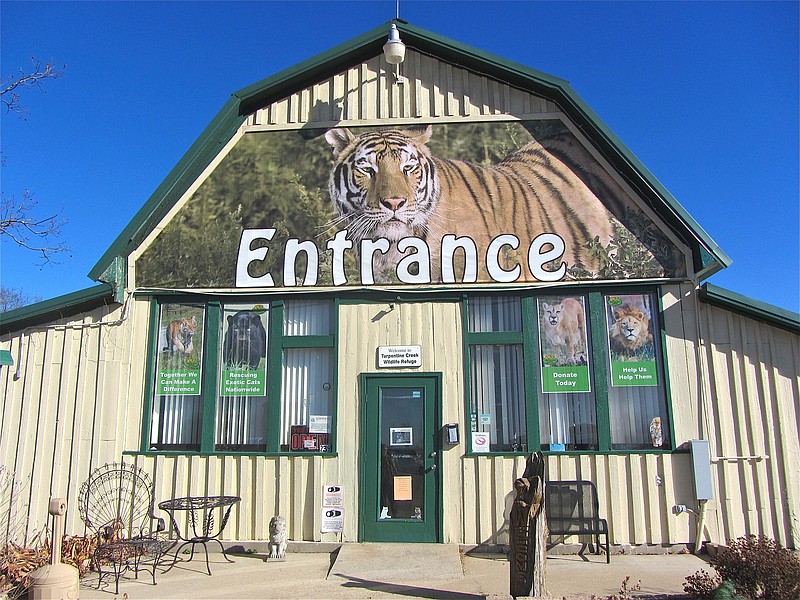 Turpentine Creek Wildlife Refuge, south of Eureka Springs, houses tigers and other big cats pictured on its website. Conservation is the focus of the park. (Special to the Democrat-Gazette/Marcia Schnedler)

Staff from an Arkansas wildlife refuge will be in Indiana today to rescue eight big cats.

Scott Smith, co-owner of Turpentine Creek Wildlife Refuge near Eureka Springs, said he and five others from the refuge drove nine hours on Thursday with two trailers to retrieve the big cats from a roadside zoo near Charlestown, Ind., about 20 miles north of Louisville, Ky.

He said Turpentine Creek is taking four tigers, three lions and a hybrid.

"We're going to give them a good home in the Ozark hills," said Smith. "They deserve a better life than what they've been given."

He said U.S. Marshals will assist in the rescue.

The big cats were at Wildlife in Need and Wildlife in Deed, which was operated by Timothy Stark and Melisa Lane.

People for the Ethical Treatment of Animals sued the facility and its owners for violation of the Exotic Species Act of 1973.

"On Aug. 3, 2020, the court granted PETA's motion for partial summary judgment, finding defendants violated the ESA by declawing big cats and prematurely separating big cat cubs from their mothers to use in hands-on public encounters called Tiger Baby Playtime," according to a federal court order on Tuesday.

Not prescribing pain medications after declawing was "a gross failure to meet the accepted standards of medical care," U.S. District Court Judge Richard L. Young wrote in his Aug. 3 decision. The court also found that premature separation "deprives [cubs] of vital components that help develop a healthy immune system," and Tiger Baby Playtime "subjects cubs to extreme stress" because they don't get adequate rest, are often handled by members of the public and they "are subject to abusive disciplinary measures."

Asher Smith, a spokesman for PETA, said the lawsuit involves 26 big cats -- 22 that are at the Indiana zoo and four that have been transferred to an Oklahoma facility. A Colorado refuge will take some of the big cats. He said other animals that were at the Indiana zoo were removed through a lawsuit in state court.

Asher Smith said the U.S. Department of Agriculture "has stripped WIN of its ability to exhibit wild animals," referring to the Indiana zoo as WIN.

"After the events of this week, WIN will no longer have any animals or any right under federal law to exhibit wild animals to the public," he said.

Stark was featured on the Netflix show "Tiger King."

"He's previously transacted animals back and forth with Joe Exotic, the main character on 'Tiger King'," said Asher Smith.

The owners of the Indiana zoo had no objection to some of the cats going to Turpentine Creek, according to a court filing.

"Turpentine Creek is really a top-of-the-line sanctuary," said Asher Smith. "Real sanctuaries don't engage in practices like declawing and cub petting. Turpentine Creek has been providing housing, rehabilitation and care for lions and tigers, including declawed animals, for over 20 years."