Four movies from Toronto, via Philly 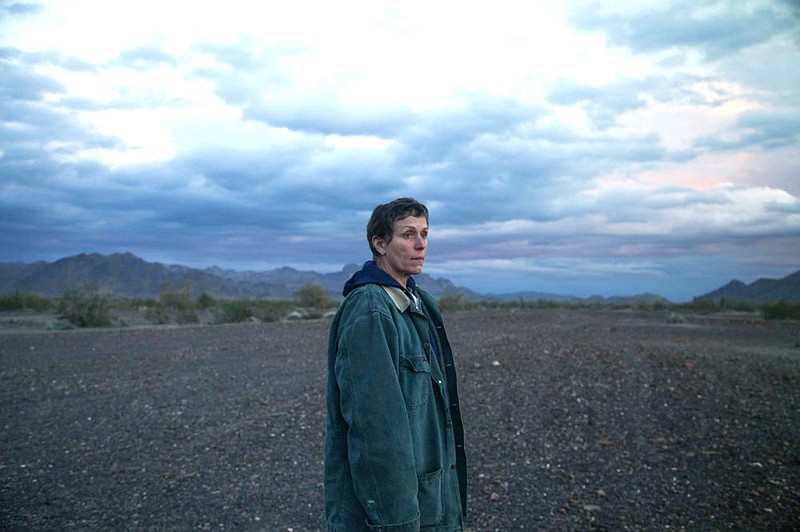 Frances McDormand is an itinerant working-class woman making her way along the margins of American society in “Nomadland,” one of the highlights of this year’s mostly virtual Toronto International Film Festival and Chloé Zhao’s follow-up to her extraordinary 2018 film “The Rider.”

VIRTUAL TORONTO -- Home, they say, is where the heart is, but just what the word may actually mean is entirely up to our own interpretation. For some, it's a very specific sort of memory, with just the right smell of sumac from your mother's cooking. For others, it's an area of dread, laced with the acrid smell of punishing experience. Or it can be the absence of all but the sense of open road in front of you.

Take Scotland, for example. If it has a cinematic identity, as such, it seems like the kind of place, desolate and unforgiving, where individuals come to exit regular society and come to a land filled with eccentric loners (stoic and unique in their oddities), in order to get better in touch with their souls.

In Ben Sharrock's deadpan dramedy, "Limbo," his protagonist, Omar (Amir El-Masry), wants very much to go home, back to Syria where he used to live with his family, instead of stuck with a bedraggled group of would-be immigrants out on a remote island off the Scottish coast. Fleeing the bloody civil war in his home country, his parents moved to Istanbul, while his older brother made the choice to stay behind and fight for the cause. Omar, a professional musician in Syria, carries his grandfather's oud with him everywhere he goes -- the only other connection to his past is the occasional spotty telephone calls he can make to his mother from the sole callbox on the island, situated even farther out in the beautifully desolate Scottish countryside from the immigrants' barrack-like living quarters.

On the cusp of a certain kind of fame as a musician back in his native country, Omar can't seem to play anything at all now, because of the cumbersome cast over his broken right arm, and his sense of loss at being cut off from his family and his culture. He's a sweet-faced guy, but his gentleness belies the pain and isolation he's feeling. He befriends one of his flatmates, Farhad (Vikash Bhai), a mustachioed Freddy Mercury fanboy from Afghanistan, who takes the mantle of Omar's agent and manager, but nothing seems to free him from the pain of missing his parents, and the guilt he feels toward his brother, whom, he assumes, is in constant mortal danger back home.

Sharrock's brand of deadpan perfectly suits the setting, but as funny as the film can be (when asked in a culture/language class to create a sentence using the "I used to" construction, one immigrant offers "I used to be happy before I came here"), it doesn't paint a rosy affirmation for Omar and his ilk, stuck as they are, as the title suggests, between countries and lives. Omar's pain is real, and for every positive step forward he takes, it feels as if it's one farther away from his family and his beloved home country.

Reinaldo Marcus Green's "Good Joe Bell," meanwhile, is based largely on the real-life story of Mr. Bell, a grieving father from a small town in Oregon, whose gay son committed suicide after being relentlessly bullied in person and online. To honor him, and to try and bring awareness to the blight of bullying, Joe embarks on a cross-country odyssey, planning to walk from his hometown to New York City, where his late son, Jadin, eventually wanted to live.

Joe is played by a grizzled Mark Wahlberg, already sunburned and suffering from blisters as we meet him walking down a mostly deserted highway, a pushcart in front of him. Director Reinaldo Marcus Green utilizes flashbacks in better detailing Joe's story and putting Jadin (Reid Miller) front-and-center with him, as a kind of apparition Joe can converse with as he makes his way down the road.

Along the way, we get to see in flashback scenes the way Joe actually was with his boy, good intentions aside: Bell, with his quick temper, and impatience for anything that's not directly related to him, is a reasonable stand-in for exactly the type of straight white male who should be watching the film (but more than likely won't). Wahlberg is gifted at playing this sort of character, who wants to have the full attention of everyone any point in time he chooses ("Did you hear what I said?" he asks incredulously after making an announcement and not receiving the proper praise for it).

He's a complicated dude, which the film alludes to without entirely capturing: He's ready to fight at a moment's notice, but shies away from directly confronting any of Jadin's tormentors; has the good intention to take action to draw attention to the problem, but doesn't seem the least bit prepared to give a speech that makes much of an impact (one detail the film does make work: His manner of saying "I love you" to his wife or sons, but only as a way of getting them to say it back to him).

To Green's credit, Joe's various rough edges aren't sanded down. He's a difficult man, and we understand, a father who tried and failed to best serve his boy, but he is making a dutiful effort in his journey to escape his native habitat, and find in alien territory, some sense of his responsibility for the tragedy that befell his son, and his role in not preventing it from happening. For all the good it does, though, and both Wahlberg and Miller are excellent, it lacks the depth of character that would allow it to really resonate. Restricted by its true story, it settles on the topsoil when it needs to be digging more deeply into the earth.

Joe crosses numerous state lines in an attempt to accept Jadin's death, but in an early scene in Cathy Brady's "Wildfire," the line of demarcation between one reality and another is the invisible boundary line on the surface of the lake that separates Northern Ireland from the South. Happily floating back and forth between the two countries one night are sisters, Kelly (Nika McGuigan) and Lauren (Nora-Jane Noone), reunited after a year's absence, after Kelly fled the town and lived as a vagabond in order to escape home.

For the sisters, whose father was killed in an IRA bombing when they were little, and whose beautifully eccentric mother (Olga Wehlry) likely killed herself shortly thereafter, the town is a muddle of emotional confusion, filled with victims and perpetrators, now living in the same community as if the past can be boxed up and put in the attic under an old blanket. When Kelly first returns, she's the wild, unbridled chaos agent in Lauren's otherwise well-managed life, living with her husband, Sean (Martin McCann), in a house with a yard, working her shifts at a nearby Amazon-like warehouse.

You can certainly imagine the ways in which the sisters' dichotomy might play out as an easy, Hollywood-esque redemption story, but gradually, as they become genuinely closer, even as Kelly is looked on with increasing anxiety by Lauren's husband, the film firms up its trajectory, and rather than reject her sister's wildnesses, Lauren more fully embraces them, protecting her younger sister, just as her mother told her to shortly before her death. For all her impulse-control issues (at one point, Kelly breaks into their old childhood home, now occupied by a different family, and falls asleep in what was her mother's bedroom), Kelly is at least honest with her feelings and is unafraid to address them, unlike many others in the community, seemingly content to keep their shared tragic past under a shroud of compartmentalization. Their mother still gets referred to as "crazy" in the town's estimation, but it's more likely she, like her two daughters, represents the clear-eyed view of someone who refused to live in denial.

Blinders are the last thing blocking the vision of Fern (Frances McDormand), the wandering protagonist in Chloé Zhao's extraordinary "Nomadland." She's absolutely about stripping everything down to its essence, which is why, in large part, she has spent the last few years traveling up and down the American West, working intermittent, seasonal jobs, and living out of her van, which she has tricked up with a kitchen and rough sleeping area.

We get hints of Fern's past -- she and her late husband lived in a town, Empire, Nev., which was created solely for the gypsum factories that got shut down -- but this isn't a film about a woman lost in the recesses of past tragedies. Fern is resolutely moving forward, from one intermittent, seasonal job after another, meeting up with other like-minded folks from time to time, but refusing to stay tied down to any one place or person.

Still, she has genuine friendships. As much as Fern is strong-willed and fierce in protecting her way of life, she's genuinely soft and curious toward people, including the crew she meets through her good friend Linda May (played by the real Linda May), who gather in the desert every so often to embrace their vagabond lifestyle. There, she also meets Dave (David Strathairn), a kindly man who takes a shine to Fern that she may or may not reciprocate.

As with her previous feature, "The Rider" (one of the best films of 2018), Zhao works with people on the outer frontier of regular society, fiercely strong and independent. She expertly blends her professional actors with amateurs, essentially playing themselves. She has an expert touch in culling poignant performances from non-actors, which adds all the more verisimilitude to the film's mise en scene.

In this, she is also tremendously aided by the two-time Oscar-winning McDormand, who has made a cottage industry out of playing such fiercely independently minded characters. She plays Fern as unadorned as one of the dusky prairies she spends most of her time around, in a perfect combination of stoicism and pathos.

It's not a film of gimmicks or easy answers -- if you're looking for a redemptive love story, you should most definitely move on from here -- but that makes it all the more realized. Fern is fully willing to pay the price for her independence, however lonely of an existence that lends her (a shot of her on New Year's Eve, alone in her van, wearing a sparkly tiara is especially evocative), but what makes Zhao's film so revelatory is the way it accepts her on her own stark terms and doesn't demand she be anything otherwise.