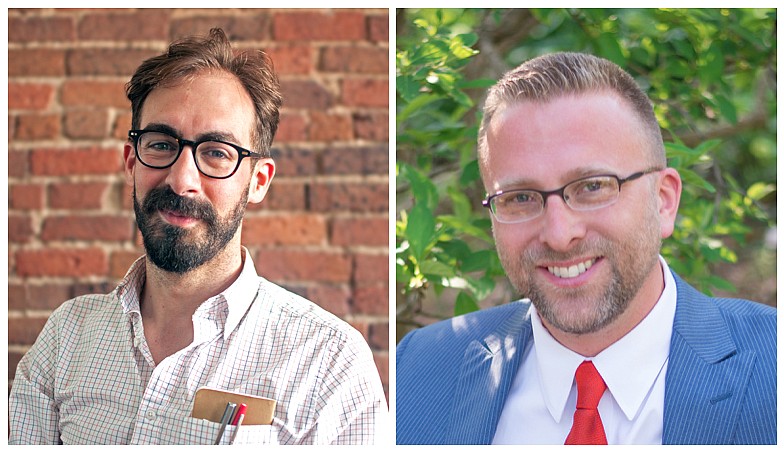 FAYETTEVILLE -- The longest-serving member of the City Council faces a challenger.

William Chesser and incumbent Matthew Petty, who began on the council in 2009, are vying for the Ward 2, Position 2 seat. Ward 2 includes the Dickson Street entertainment area and downtown square. Other notable landmarks are Wilson Park, the Washington-Willow neighborhood, Woodland Junior High and the University of Arkansas campus east of Garland Avenue.

Council members earn $1,042 per month and serve four-year terms. The positions are nonpartisan.

The Northwest Arkansas Democrat-Gazette emailed the same questions to the candidates. Their responses are below.

QUESTION: For properties downtown, meaning Dickson Street and the square and their surrounding areas, where would you say you stand on the line between revitalization and preservation? Building anew versus keeping what's already there?

Chesser: This is a judgment call and will vary from building to building. We clearly won't preserve all buildings. How do we decide a building is valuable (not in merely a monetary sense, but in other ways too) enough to preserve?

Some buildings are valuable because they are extremely old, exemplars of a particular style or special for other reasons. The old log cabin preserved in downtown Springdale is an example of the first type. Any building designed by Fay Jones would be a local example of the second type. The Sears House on Dickson Street is an example of the third, though these examples are obviously not exhaustive.

All of these buildings would have strong arguments for preservation as opposed to replacement. They all contribute to the fabric of their communities. I would also want to know the opinion of experts such as the Washington County Historical Society as to the significance of a particular building.

Petty: We have to be stewards of the downtown and make sure it remains familiar to us as time moves forward. I'm worried that this question anticipates a black-and-white answer, even though it seems more complicated.

For example, we're doing revitalization now: next year comes a major lighting and sidewalk project making side streets feel safer for more people. This question seems like it is really about infill.

If someone says we need to tear down Dickson, they are wrong. What we need most downtown is more housing. At the same time, it's a huge mistake to believe "any infill is good infill" just like we shouldn't believe "any business is good business."

We need to focus on turning vacant lots and lawns into housing or even shophouses and storefronts, and we need to keep upgrading the rules so infill is more compatible with nearby properties.

It's clear from the skyrocketing pricing trends in downtown that there are not enough homes close to downtown to meet the demand. That's a problem for climate change, and it makes inequality worse, too. We need new construction to fix these problems, but that fact doesn't preclude preserving the best of what we already have.

QUESTION: Any ideas on how to recoup potential sales tax revenue lost during the pandemic?

Petty: Yes. Already, I worked to help restaurants and bars open outdoor seating without having to pass a long checklist. The new patios and parklets downtown come directly from legislation I proposed in response to the numerous calls for help I got from downtown businesses.

One thing I was able to do early in the pandemic was get our staff plugged into a national network of cities sharing their lessons in real time. I was also a strong advocate for the new outdoor refreshment area and making outdoor events easier to permit.

However, no matter what measures we take, it won't be enough. For a lot of businesses and workers, the pandemic has already hit too hard.

The municipality itself is in a relatively good position because the recently passed bonds will allow us to continue to make progress through a recession (and, the internet sales tax is new for us, too, and is helping to close the gap relative to past years).

What's important now is that we focus on helping those most impacted. It feels like we can't devise all the solutions we'll need in advance, but we can be ready to act when it's right.

Chesser: The only way to do that is to increase sales. I think we're going in the right direction with things such as the outdoor refreshment area and allowing restaurants much greater flexibility in opening outdoor spaces. I would like to see those ideas expanded further.

We might extend the ORA to our parks (temporarily) and allow restaurants to deliver food and beverages to those locations. I am including adult beverages in this equation.

We have to have more spending occur, either from outside money or more money spent by residents in town. We might consider holding make-up events for those that we missed, such as Bikes, Blues and BBQ, but we can't make up for things like missed sporting events.

Lastly there is growth. We're listed as one of the top three places to live in the country. That means people moving here.

When they do, they bring money, talent, opportunities and new businesses. All that will increase revenue.

We should manage that growth, but growth is one of the only ways we will patch the hole left by covid. We're going to grow anyway because of our popularity. We have to figure out how to do so wisely.

QUESTION: What issues should the City Council focus on over the next few years?

Chesser: We have to continue to attract a larger share of businesses and people that are coming to Northwest Arkansas than we currently are. We were the leader in a lot of areas, but others are catching up to us and even surpassing us.

The university is traditionally our largest employer and has taken us a long way, but I think we need to seriously look at how to attract other businesses that want to be located in Northwest Arkansas to Fayetteville, as opposed to other towns they might choose.

We should examine the mix of elements necessary to attract things such as high-tech and other growth sector jobs and figure out what we're missing and how to add it.

As the city grows, we need to plan that growth, and we need to plan it together as a community. There is not one single person who has all the best ideas for how this community should develop. But grow and develop we must.

We cannot tread water, for in that way lies stagnation, and I don't think we actually want that. We must stay vibrant and allow growth while remaining true to what makes this town great.

Petty: Of course, top priority is transitioning from outbreak response to long-term recovery. It will take longer than a year to fully reopen our economy and restore our way of life.

Along the way, we would be wise to upgrade policies and programs to better suit our future.

It seems like Ward 2 wants me to focus on climate change and inequality.

One of the most important things we can do for both issues is ensure new housing and job centers are closer to one another. It's not right that essential workers are priced out of the districts where we ask them to serve deadly shifts.

With better planning and more purposeful infill rules, we can shorten trips and reduce emissions for everyone while preserving the sense of familiarity that made us fall in love with this city.

A significant portion of the new housing we need to build must be affordable. The truth is we think about affordable housing wrong.

It feels like a couple of projects should be enough, but it won't be.

• Political experience: Unsuccessful bid for City Council in 2012 and for Washington County assessor in 2016.

• Education: Bachelor of science in mathematics and political science, University of Arkansas,.