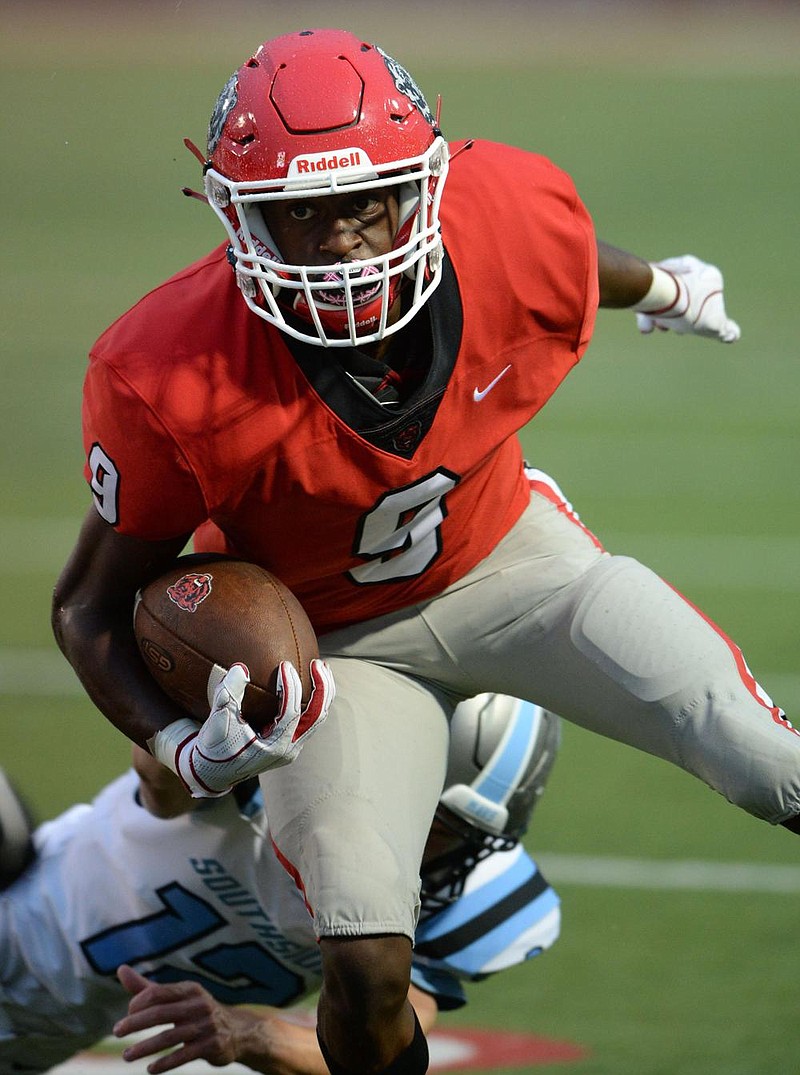 ON THE AIR Live-streamed at www.bentonvillesportsnetwork.com

BETWEEN THE LINES This marks the first time that Bentonville will play a team from Kansas ... Tigers coach Jody Grant picked up his 50th win with last week's 21-17 win over Kansas City Rockhurst. ... Sophomore RB Josh Ficklin has 219 yards and 2 TDs rushing, while QB Andrew Edwards is 21-of-34 passing for 348 yards and four TDs. ... Chas Nimrod caught 2 TD passes and is the Tigers' leading receiver with eight catches for 158 yards and three scores. ... Bentonville's defense rose on two occasions to preserve its lead, including an interception by Ethan Estes. ... Mill Valley, Kansas' defending Class 5A state champion, is coming off a 70-21 victory over DeSoto, Kan. ... Jaguars QB Cooper Marsh is 21 of 24 passing through two games for 340 yards and 4 TDs, with WRs Kendrick Jones and Jacob Hartman each having eight receptions. ... RB Quin Wittenauer has 283 yards rushing and five TDs through two games. ... MLB Colten Jegen has a team-high 23 tackles, followed by FS Hunter Gray with 17.

HOOTEN'S RANKINGS Bentonville is No. 2 in Class 7A.

ON THE AIR Game will be live-streamed on the Rogers Public Schools app.

BETWEEN THE LINES Rogers Heritage will look to start 2-1 for the first time since 2013. ... The War Eagles snapped a 25-game losing streak two weeks ago with a 55-12 win over Springfield (Mo.) Central. ... Sophomore quarterback Carter Hensley ran for three touchdowns and threw for two more in the first half alone two weeks ago at Heritage rolled to a 49-6 halftime lead. ... Nick Winter was on the receiving end of two of those touchdown passes from Hensley. ... Alma's Logan Chronister ran for 117 yards in the Airedales' 47-10 loss last week at Poteau, Okla. ... The Airedales have lost their first two games by a combined score of 82-10.

ON THE AIR The game will be live-streamed at greenwooddogpound.com.

BETWEEN THE LINES Choctaw enters the game off a 28-10 win against Van Buren last week. ... Greenwood comes into the game after a 33-0 shutout win against Springdale Har-Ber. ... Choctaw proved it was a better team than the one that got smashed by Springdale the previous week, but the win over Van Buren was tempered somewhat be the fact that Pointers' quarterback Gary Phillips did not play in the game. ... Greenwood continued its dominance of Class 7A schools by forcing a number of Har-Ber turnovers and cashing those into points. The Bulldogs also stopped Har-Ber six times on fourth down. ... Choctaw has a team loaded with Power 5 prospects including WR Chase Jackson, who is committed to TCU, and DB Jordan Mukes, who is committed to Oklahoma. Jackson will miss the remainder of the season with a knee injury suffered against Springdale. ... Greenwood QB L.D. Richmond was almost flawless in the win against Har-Ber, completing 22 of 26 passes for 254 yards and a pair of touchdowns. He also rushed for a touchdown.

HOOTEN'S RANKINGS Greenwood is No. 1 in Class 6A.

BETWEEN THE LINES Ozark rebounded from a tough one-point loss to Booneville in its opener to down Clarksville 32-12. ... Charleston used a 100-yard interception return by Kaleb Hamby to edge previously unbeaten Pottsville 21-14. ... Ozark led 24-0 at halftime and used the legs and arm of senior QB Harper Faulkenberry to knock off Clarksville. Faulkenberry ran for 87 yards and a touchdown and passed for another. ... Charleston leaned on its defense to turn away Pottsville several times in the game, including late when the Apaches had moved into the Charleston 10. ... Breckon Ketter scored one of the Charleston touchdowns in the win and Hamby added a 22-yard touchdown reception.

ON THE AIR The game is live-streamed on the Shiloh Christian Saints team web site.

BETWEEN THE LINES Shiloh Christian rolls into the game after a 34-28 home win two weeks against the defending Class 4A state champions from Poteau, Okla. ... Sand Springs fell to Tulsa Bishop Kelley 28-24 in the closing seconds. ... Shiloh Christian sophomore quarterback Eli Wisdom had another big game for the Saints against Poteau, rushing for a pair of touchdowns and firing a TD pass. ... Sandites quarterback Ty Pennington was 10 of 32 passing for 315 yards and a pair of touchdowns and ran for another score in the loss to Bishop Kelley. ... Shiloh Christian's defense came up with some key stops against Poteau to preserve the win, including late in the game when the Pirates recovered a Saints' fumble but could not capitalize.

HOOTEN'S RANKINGS Shiloh Christian is No. 2 in Class 4A.

BETWEEN THE LINES It's the first meeting ever between the two schools. Atkins junior Zach Berekemeyer has thrown for 8 TDs and no interceptions in two games. ... Waldron senior Braden Williams has more than matched him, throwing for 9 TDs. ... Senior Donovan Nooner leads the Atkins run game, rushing for a team-high 170 yards on just 14 carries and 3 TDs. ... Kreed Stubbs leads the Atkins receiving corps with eight catches for 242 yards and 4 touchdowns. ... Senior Josh Carpenter anchors the defense with five tackles for loss in just two games for Atkins. ... Sophomore Trevor Hunt has a pair of interceptions already for Waldron, returning one for a touchdown. ... The Bulldogs already have five interceptions as a team including two by Williams from his linebacker position.

BETWEEN THE LINES These two schools haven't played each other since they were both in the 4A-1 Conference during the 2006-07 series and split the two games. ... Greenland is coming off a 27-8 victory over Danville after shutting out the Little Johns in the second half. ... Greenland QB Gabe Wilson has accounted for 309 yards and 3 TDs passing and 111 yards and 2 TDs rushing. ... Pirates RB Jett Dennis has rushed for 303 yards and 2 TDs and has 4 receptions for 10-7 yards and a score. ... Berryville hasn't played a game since a 44-6 loss to Cedarville on Aug. 28, thanks to being quarantined because of the coronavirus pandemic. The Bobcats had to cancel last week's game against West Fork ... Berryville QB J.R. Smith Smith returns for his third year of directing the Bobcats' offense after rushing for 327 yards and three touchdowns and passing for 282 yards and two scores last season. ... RB Jaeden Tanksley also returns to the offensive backfield after he ran for 403 yards and four TDs last season.

ON THE AIR live-streaming at pgtigersonline.com

BETWEEN THE LINES Stilwell, Okla. defeated Gentry 32-8 last week to end a 20-game losing streak. .... Don Harrison won his first game at Stilwell after being hired in the off-season from Lincoln, where he coached for five years. ... The Indians opened the season with a 42-7 loss at Class 7A Rogers. ... Knox Laird threw 3 touchdown passes last week to help Prairie Grove hold off Pea Ridge, 35-33. .... Prairie Grove displayed a balanced off with 142 yards and 198 yards passing. ... Cade Grant rushed for 77 yards and two touchdowns while Landon Semrad caught 3 passes for 77 yards and 2 TDs. .... Prairie Grove coach Danny Abshier earned his 200th career victory with a 19-7 win over rival Farmington to open the season.

HOOTEN'S RANKINGS Prairie Grove No. 18 in Class 4A.

BETWEEN THE LINES Booneville rallied from a 13-0 deficit to defeat Ozark 20-19 two weeks ago. .... Randon Ray rushed for 145 yards and 3 touchdowns and Jacob Herrera secured the victory with an interception late in the fourth quarter. ... Mena battled Class 5A Hot Springs evenly for four quarters before losing 20-13 to the Trojans in overtime. .... Mena tight end Mason Brotherton (6-foot-4, 230) is verbally committed to Kansas. ... Mena coach Craig Bentley previously coach at Mansfield.