Silent running: from Chaplin to Hitchcock 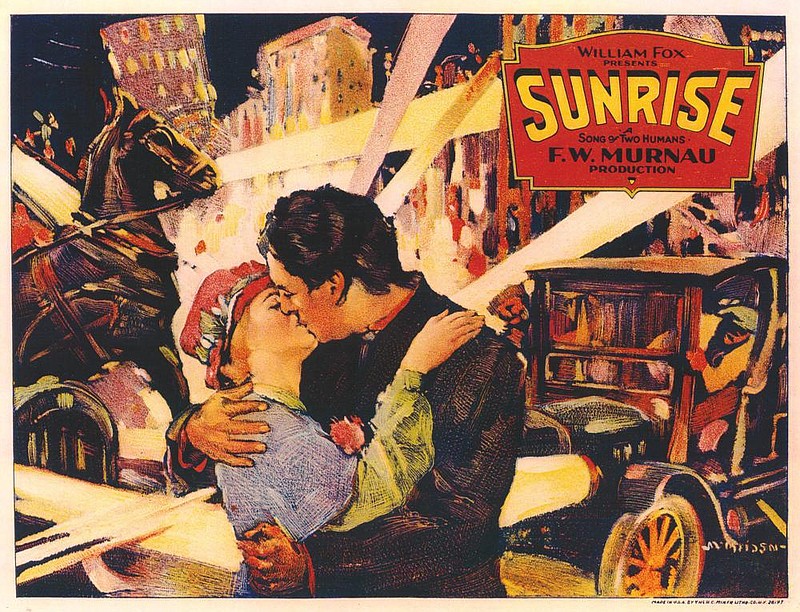 F.W. Murnau’s “Sunrise” is considered by some to be the greatest silent picture of all time. It might be the one most likely to bring modern audiences to tears.

Stuck inside, and with precious little to do other than read books, bake things, and bug our friends and family members, there is no time like the present to fully put to use all those streaming services we've been paying for and underusing. For this streaming column, we're rounding up the current 10 best films in a given genre you can stream at home. Given the multitude of streaming options, we're limiting our search to a selection of the biggest and best-known services -- Amazon Prime, Disney+ and Netflix -- along with a niche offering -- Criterion Channel -- that we honestly couldn't live without.

Of course, some people might believe the earliest films ever made would be too old and irrelevant in today's hard-charging, food-processor-fast cutting, stream-anywhere-on-your-Dick Tracy-watch, media oversaturation, but we all know those people are fools. Some of the most sublime cinematic moments ever recorded occurred in the medium's first three decades. You want laughs? Tears? Uplift? Degradation? Beauty? Horror? If you are as-yet unfamiliar with the possibilities, allow me to suggest some options you might not have considered before.

"A Dog's Life" (1918): A very early Charlie Chaplin short (33 minutes) that finds the Tramp -- gasp! -- in desperate need of money, and unable to land a job. Instead, he saves, then adopts a scrappy little dog ... named "Scraps"... befriends a sweet cocktail singer, and goes on to have a successful life (we assume) shortly after Scraps digs up a stolen wallet filled with cash and they are able to dispatch the crooks looking to get it back. Striking the signature cross between slapstick and sentimental, Chaplin adds to his burgeoning legacy with this one.

"Battleship Potemkin" (1925): If ever you're in need of sounding like you understand the history of film -- or at least dabbled in getting a degree in Cinema Studies -- you can casually mention the famous "Odessa steps" sequence from this Sergei M. Eisenstein classic. It's an early masterclass in editing and pace that has become emulated and re-made countless times since the film's release (check "The Untouchables" train-station homage). The rest of the film, about a military uprising onboard a ship that leads to a larger street protest, is pretty great as well, so stick around.

Sample Title Card: "We've had enough rotten meat! Even a dog wouldn't eat this! It could crawl overboard on its own!"

"Dr. Mabuse the Gambler" (1922): We've discussed the general brilliance of the German Expressionists several times before, but in case you were still in doubt, Fritz Lang's four-hour opus about the master criminal Dr. Mabuse (Rudolf Klein-Rogge), and the resourceful detective (Bernhard Goetzke) who strives to take him down, should cement it for you. Evocative, with more of that stunningly effective German way with makeup, the film keeps its unsettling vibe throughout. An early indication of the genius of director Lang.

"Sunrise" (1927): If you are still under the misconception that a black and white silent film can't move you to tears, let F.W. Murnau's glorious ode to love and redemption prove otherwise. Subtitled "A Song of Two Humans," the film concerns a happily married farmer (George O'Brien), whose love for his wife (Janet Gaynor) is tested when a beautiful woman (Margaret Livingston) from the city entreats him to kill his spouse and leave with her. Soulfully shot by Charles Rosher and Karl Struss, the film's heartfelt performances shine with delicate poignancy.

Sample Title Card: "For wherever the sun rises and sets, in the city's turmoil or under the open sky on the farm, life is much the same; sometimes bitter, sometimes sweet."

"The Freshman" (1925): A Harold Lloyd comedy in which our hapless hero, trying to emulate a character named "Speedy" he sees in a movie, goes off to college with the dream of becoming the most popular dude on campus, but meets with continuous social disaster instead. The gags are fast and furious, especially as our Speedy attempts to make the football team, and is continually deceived about the success of his efforts by an upperclassman with a cruel streak.

Sample Title Card: "The Dean of the College -- he was so dignified he never married for fear his wife would call him by his first name."

"The General" (1926): Pound-for-pound, one of the funniest movie stars of all time, Buster Keaton was at his continued zenith with this brilliant piece of comic flim-flammery, as he plays a train engineer, devoted to his engine, who has to fight to get her back when she's stolen by Union spies, with his best girl (Marion Mack) stuck on board. Keaton's physical wizardry, performing all his own stunts -- which are plentiful and insanely dangerous -- is legendary, but it is his continual deadpan countenance against all odds that makes his characters so endearing.

Sample Title Card: "Three men stole my General. I think they are deserters."

"The King of Kings" (1927): You want spectacle? Cecil B. DeMille's epic story of Christ's betrayal, long-suffering death, and eventual resurrection provided audiences with state-of-the-art thrills, along with heavy doses of Christian dogma. As a partial result, DeMille's name eventually became synonymous with such big-budget epics (he went on to make similar sorts of hugely expensive pictures, such as "Cleopatra" and "The Ten Commandments").

Sample Title Card: "Harness my zebras -- gift of the Nubian King! This Carpenter shall learn that he cannot hold a man from Mary Magdalene!"

"The Lodger: A Story of the London Fog" (1927): Jack the Ripper's horrifying exploits were about three decades in the past when a young, up and coming British director named Alfred Hitchcock made this film about a boarding house in London where the landlady (Marie Ault) and her husband (Arthur Chesney) suspect one of their renters (Ivor Novello) as the serial killer haunting the streets in Whitechapel looking for victims. Hitch had already made a handful of features, but this morbid little treat became an early signature for the soon-to-be Master of Suspense.

Sample Title Card: "You're shivering. Keep your handcuffs hidden and we'll get some brandy."

"The Passion of Joan of Arc" (1928): Longtime readers may recall my unbridled enthusiasm for Carl Theodor Dreyer's stone masterpiece, which depicts the trial of the French heroine (the luminescent Maria Falconetti), and her execution, with such pathos and verve, it remains absolutely shattering. One of the 10 films I would take with me to the proverbial desert island, Dreyer attempts to create a near-religious experience for his viewers and more than succeeds.