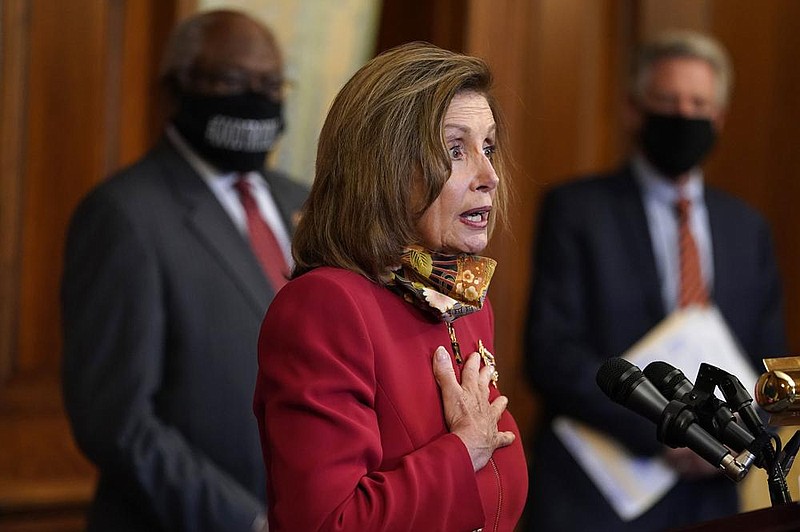 WASHINGTON -- Some House Democrats are keeping pressure on House Speaker Nancy Pelosi to present a new coronavirus relief bill for a vote next week.

Pelosi said Thursday that voting on some version of a Democratic stimulus bill is one of the options that's been under discussion within the party to break the impasse with the White House and Senate Republicans.

Some Democrats want to vote again on the $3.4 trillion stimulus package that the House passed in May, she said at a news conference, while some lawmakers don't want to advance any legislation until they have an agreement with the Trump administration.

"Others will say let's just put our own proposal on the floor," Pelosi added.

Pelosi expressed confidence that Democrats are united in their approach and that she felt no pressure to change her strategy. "We are in a good place," she said.

President Donald Trump's embrace Wednesday of a bigger stimulus package than his administration had previously backed and that Senate Republicans have said they'd go for has revived hopes that a deal can be struck before the November election.

Trump urged the GOP in a tweet Wednesday to "Go for the much higher numbers" in new coronavirus stimulus. He followed up at a White House news conference by saying he liked "the larger numbers" in a compromise $1.5 trillion stimulus plan from a bipartisan group of House lawmakers.

"I agree with a lot of it," Trump said of that proposal.

It's above the $1.1 trillion that the White House previously backed and much higher than the $650 billion that Senate Republicans more recently proposed. White House Chief of Staff Mark Meadows said the $1.5 trillion figure wasn't a "show-stopper," but it appeared that way to some Republicans.

Swing-district Democrats have privately pressed for a vote on a $2.2 trillion bill representing the current Democratic offer in negotiations, even if there is little chance of it getting through the Republican-controlled Senate. But Pelosi and other members of the party leadership insist that no decision has been made on holding another vote without first reaching of deal with Republicans.

[Video not showing up above? Click here to view » https://www.youtube.com/watch?v=p7KWWyQpqx0]

There have been no new negotiations between Pelosi and the White House since talks broke off last month, and many lawmakers remain skeptical that an agreement can be pulled off.

"We have come down a trillion dollars" from the bill passed in May, Pelosi said. "It's hard to see how you can go any lower when you only have a greater need."

While Republicans such as Sens. Roy Blunt of Missouri and John Cornyn of Texas have suggested that the $1.5 trillion plan from the Problem Solvers Caucus could be the basis of a deal, many others said there wasn't enough GOP support for that much spending.

"This used to be the White House versus Pelosi up until about now -- now the president's coming in and saying we can maybe go to $1.5 trillion," Senate Finance chairman Chuck Grassley, an Iowa Republican, said Thursday in a Bloomberg TV interview. "He better be careful of that because I don't think that will get through the United States Senate."

Adding to the pressure is the calendar. The general election that will decide control of the White House and Congress is 47 days away. The House is scheduled to leave Washington on Oct. 2 and the Senate the week after that.

There is restlessness in the White House and in both parties in Congress about facing voters with no additional boost for the economy.

Texas Democratic Rep. Lloyd Doggett predicted that the House will vote on a revised stimulus bill either at the end of next week or the following week.

"We're not going to go home without voting on something," he said.

House Rules Chairman Jim McGovern, a Massachusetts Democrat, said lawmakers are considering the idea of a new vote, but leaders are still hoping to reach an agreement with the White House in the next few days.

"The president is motivated to get stimulus checks out with his name on it," he said.

Sen. John Thune, R-S.D., the party's No. 2 in the chamber, said $1.5 trillion would cause "a lot of heartburn" for GOP members. His colleague Ron Johnson, R-Wis., underlined that last Thursday's $650 billion bill, was the right size. That legislation was blocked by Democrats who called it insufficient.

As the parties struggle to keep a united front, the impasse between the main negotiators remains. While Pelosi and Treasury Secretary Steven Mnuchin conferred Wednesday on a stopgap spending bill to keep the government open past the Oct. 1 start of a new fiscal year, they didn't discuss the stimulus bill.

Meadows told reporters Thursday that "there are no planned discussions with the speaker or with leader Schumer" at this point, and that if Pelosi sticks with a $2.2 trillion demand, stimulus relief won't get enacted before the election.

At the same time, evidence is emerging about the danger of fiscal-stimulus withdrawal. U.S. retail sales growth slowed much more than expected in August, after supplementary unemployment benefits passed in March ran out.

"My sense is that more fiscal support is likely to be needed," Federal Reserve Chairman Jerome Powell said in a Wednesday briefing after the central bank reinforced expectations to keep interest rates near zero for years to come. He cited the 11 million Americans still out of work because of the coronavirus, struggling small businesses, and declining revenue among state and local authorities.

Republicans are split between fiscal hawks reluctant to provide the economy with much more relief and swing-district moderates whose constituents are demanding covid-19 aid. Trump appears to have fewer qualms about the $3.3 trillion budget deficit.

Meadows signaled newfound flexibility on what's been a key sticking point in his and Mnuchin's talks with Pelosi and Schumer: Aid to state and local governments. The administration had painted the Democrats' demand for $915 billion as a give-away to poorly run blue states and had put forward a much smaller $150 billion.

The bipartisan 50-member House group, known as the Problem Solvers, included about $500 billion in its compromise proposal. Meadows said that while that's more than the White House estimates states have lost in revenue because of the pandemic, the administration could accept a figure in the $250 billion-$300 billion range.

The two leaders of the Problem Solvers group -- Reps. Tom Reed, R-N.Y., and Josh Gottheimer, D-N.J. -- issued a statement saying they were "thrilled to hear of developments" suggesting a potential step toward fresh negotiations.

Pelosi and Schumer, in their statement, said, "we look forward to hearing from the president's negotiators that they will finally meet us halfway."

Rep. David Cicilline, D-R.I., a member of the House Democratic leadership, said "I'm cautiously optimistic, adding that the administration is "realizing the consequences of not acting.

Meadows said the industry needs $25 billion, and that 30,000 to 50,000 jobs are at risk. Airlines have warned that they plan mass reductions after a federal prohibition on job cuts expires at the close of business on Sept. 30.

Extending payroll assistance for airlines has been backed by members of both parties to avert politically treacherous layoffs a month before the U.S. elections, but so far there has been no agreement on how.

"I never thought I'd say $25 billion was a small number, but compared to $1.5 trillion, it's a rather small amount of additional assistance that could potentially keep 30,000 to 50,000 workers on the payroll," Meadows said.

"If we're going to get something separate prior to that deadline, it's going to have to happen next week," he said of an airline-only bill. That would ensure that it gets to Trump's desk before layoffs begin on Oct. 1, he said.

A bipartisan group of House lawmakers called for more airline aid to prevent layoffs in July.

The prospect of fresh assistance failed to immediately reassure airline investors. Most major U.S. carriers in a Standard & Poor's 500 gauge fell Thursday, joining a retreat in broader equity markets. The index was off less than 1% at 10:26 a.m. in New York.

Carriers have been severely damaged by the coronavirus pandemic, which has led many Americans to abandon air travel.

After airline passenger counts rose around the close of summer and the Labor Day holiday, they've been declining in recent days.

Information for this article was contributed by Laura Litvan, Billy House, Josh Wingrove and Saleha Mohsin of Bloomberg News. 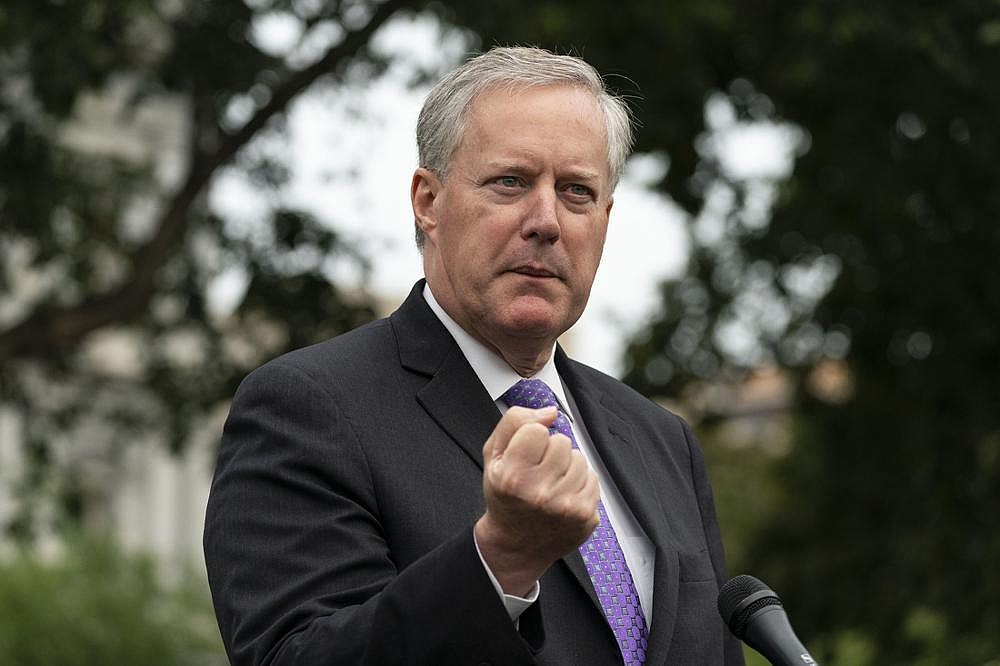 White House Chief of Staff Mark Meadows said Thursday that “there are no planned discussions” with Democratic leaders, but a $1.5 trillion package backed by President Donald Trump is not a “show-stopper.” (AP/Alex Brandon) 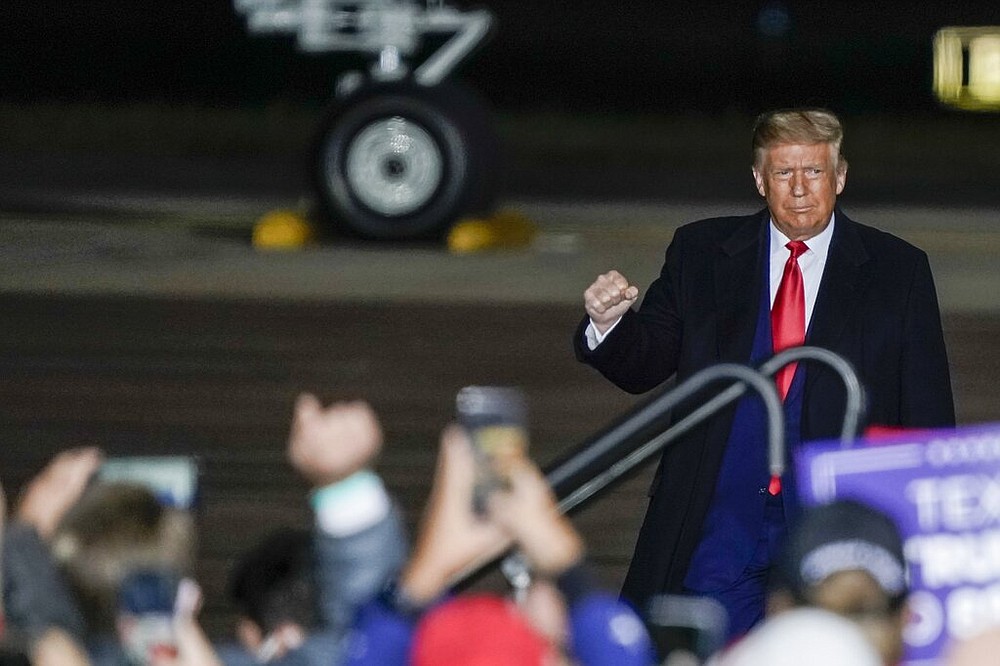 President Donald Trump arrives at a campaign rally at the Central Wisconsin Airport in Mosinee on Thursday, Sept. 17, 2020.