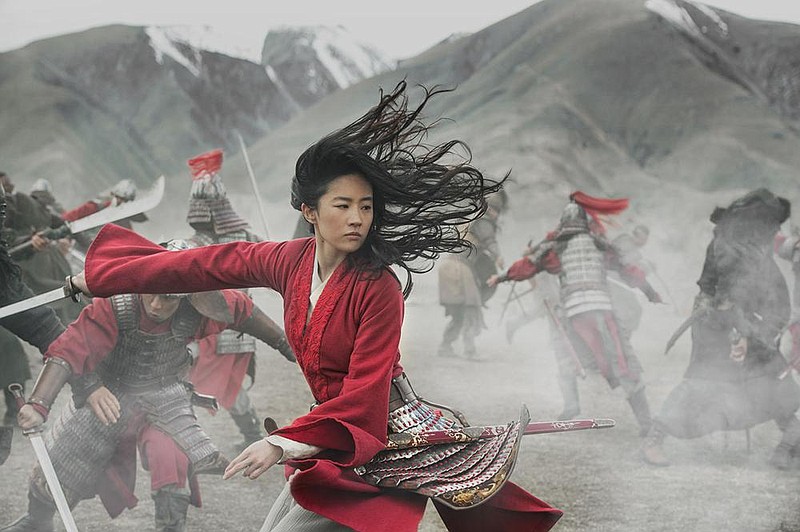 Yifei Liu stars as the title character in the Disney + film “Mulan,” which opened in theaters in China, but is only streaming in the United States.

LOS ANGELES -- For all of his love of time-shifting scenarios, director Christopher Nolan never could have imagined the delayed rollout for his film "Tenet." Since the covid-19 pandemic has upended all semblance of normalcy, "Tenet" has been put in the uncomfortable position of serving as a bellwether for audience attitudes toward a return to cinema-going.

This is why, in its second weekend of U.S. release, Warner Bros. continues to strategically parcel out data about "Tenet's" performance -- forgoing standard daily breakdowns in favor of lump weekend grosses -- as newly opened Orange County, Calif., theaters and an expansion to Los Angeles-area drive-ins have managed to buoy the film's domestic performance.

The espionage thriller starring John David Washington added $37.3 million across 50 markets worldwide last week for a global cumulative of $207 million, according to estimates from measurement firm Comscore. That includes a modest $6.7 million weekend in North America, where the cumulative total has hit $29.5 million across 2,910 locations for a per-screen average of $2,302.

"We, as Angelenos, are truly part of a car culture," said Paul Dergarabedian, a senior media analyst for Comscore. "So it's no surprise that if people drove great distances over the summer to go to drive-ins, they would not hesitate to drive from L.A. County to Orange County to have their first crack at a brick-and-mortar movie theater experience since March. Considering reduced capacity is in play, it makes it even more impressive that likely most of the available seats, though obviously fewer of them than in 'normal' times, were snapped up by enthusiastic moviegoers."

Last week, Comscore released a survey meant to gauge just how eager moviegoers were to return to hardtop theaters.

"What the survey shows is that movie fans are fans of the big screen experience," Dergarabedian said. "They were really just excited to go back to the theater and see that health and safety measures were obvious and enforced. And a new Christopher Nolan film is clearly a huge incentive."

The other film that box office watchers have been tracking is Disney's live-action "Mulan," even though it's not getting a U.S. theatrical release. Although it opened at No. 1 in China, "Mulan" came in below expectations of $25 million to $30 million in the crucial overseas market, instead hitting $23.2 million for an international cumulative of $37.6 million. The film is being released only in markets that do not have the Disney+ streaming service, where it is currently available as a PVOD purchase for subscribers. It has also been the subject of multiple controversies.

Elsewhere last weekend, Columbia opened the young adult-skewing romantic comedy "The Broken Hearts Gallery" to $1.1 million across 2,204 locations. Although the studio did not report daily grosses over the weekend, it did break out daily numbers on Sunday, unlike Warner Bros. with "Tenet."

The studio is optimistic about its performance and potential.

Smith noted that the film will have a slow rollout as more theaters continue to open in the United States.

Among key holdovers, 20th Century Studios' "The New Mutants" added $2.1 million in its third weekend, for a North American cumulative of $15.3 million.

In an example of the various ways films are released these days, the Janelle Monae horror "Antebellum" will hit select theaters today in addition to PVOD; the Stacey Abrams voting rights documentary "All In" launches on Amazon today after a limited theatrical run; the thriller "The Devil All the Time," starring Tom Holland, Robert Pattinson, Riley Keough and Sebastian Stan, premiered Wednesday on Netflix, and IFC will unveil the Jude Law Sundance drama "The Nest" today in markets where theaters are open.