Alma gets a kick out of its overtime 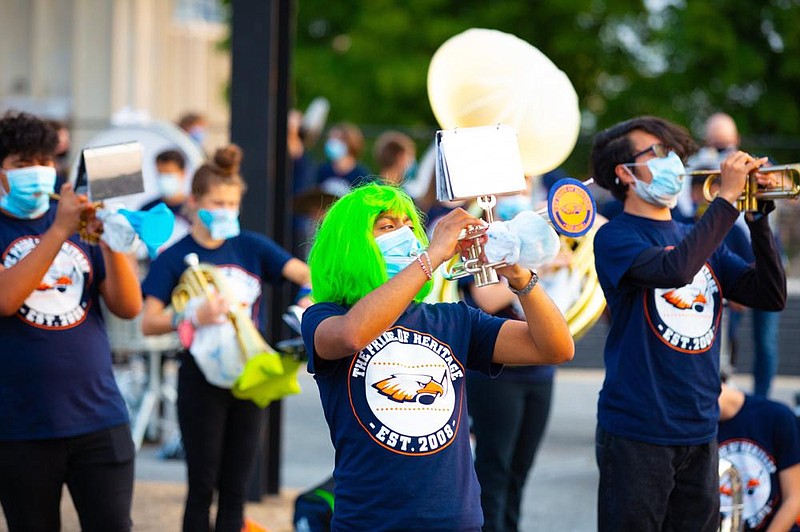 Members of the Rogers Heritage band play Friday before a 17-14 overtime loss to Alma at David Gates Stadium in Rogers. (Special to the NWA Democrat-Gazette/David Beach)

ROGERS — The Alma Airedales needed a win in the worst way, and they found a way on the road against Rogers Heritage.

Dane Martin kicked a 20-yard field goal in overtime Friday to give the Airedales a 17-14 victory.

The War Eagles (1-2) were nursing a 14-6 lead halfway through the fourth quarter when Logan Chronister ran 11 yards for a touchdown with 6:49 left to play. Chronister added the two-point conversion run to tie the game at 14-14.

“All I did was focus on the ball and how I was going to kick it — and it went right through the uprights,” Martin said.

“I told somebody last week that Dane Martin was going to win us a football game, and it came seven days later,” said Alma Coach Rusty Bush, who earned his first victory as the team’s coach.

The Airedales (1-2) took a 6-0 lead when quarterback Conner Stacy hit Jacob Coursey with a 53-yard touchdown strike. Martin never got a chance to kick the extra point as the snap was bobbled and covered up by Rogers Heritage.

The War Eagles sprang to life with a 61-yard scoring drive. Quarterback Carter Hensley converted a key third and 8 with a 13-yard strike to Nick Winter.

Four plays later, after a pass interference call had moved the ball to the 14, Hensley took it in from a yard out to give the War Eagles a 7-6 halftime lead.

Alma twice drove deep into Heritage territory in the third quarter but was denied in large part because of two personal foul penalties.

The Airedales were on their heels again when Terrion Franklin scooped a low screen pass and nearly took it back for a touchdown.

Stacy’s touchdown-saving tackle went for naught when, three plays later, Hensley scooted in untouched from 17 yards out for a 14-6 lead halfway through the third quarter.

The Airedales were in trouble when a poor snap on fourth down led to a short punt that the Airedales fielded at the War Eagles’ 15.

Heritage failed to convert on its first overtime series, with Baxley missing his second field goal.

That gave Martin a chance for the game-winner.

“The last two weeks, we kind of let ourselves down,” Martin said. “This week we worked hard to try to get ourselves ramped up for this game.”

Hensley had 64 yards rushing and two touchdowns for the War Eagles. Teammate Ethan Farris added 86 yards on the ground.