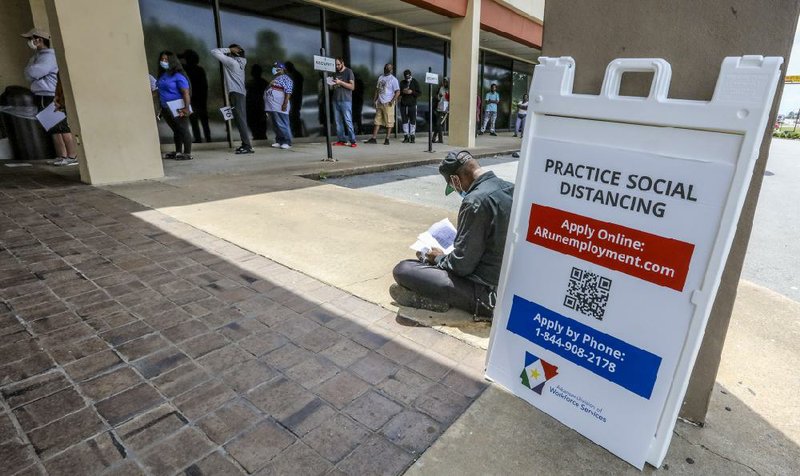 A man fills out paperwork outside the Arkansas Workforce Center, 5401 S. University Ave. in Little Rock, in this May 13, 2020 file photo. The state has more than 30 such centers, which offer unemployment insurance, employment assistance and assistance for needy families. (Arkansas Democrat-Gazette / John Sykes Jr. )

Arkansas' unemployment rate rose to 7.4% in August, according to data from the Bureau of Labor Statistics, a rise of three-tenths of a percentage point from July, but lower than the national average.

Arkansas was one of four states to report a rising rate last month.

"It's unexpected," said Michael Pakko, chief economist at the University of Arkansas at Little Rock. The U.S. unemployment rate fell in August -- a sign that more people around the country are returning to work after the economic shock created by the covid-19 pandemic.

The number of nonfarm jobs rose 1% to 1.2 million month-to-month, but remains 4% lower from August of last year. Most of the additional jobs came from the government, retail, and administrative and support sectors.

During a period of labor market weakness, workers who had dropped out of the labor market resume their search for employment, temporarily increasing the unemployment rate, Pakko said.

"Time will tell if that is what's going on," he said, but the sharp increase in labor force participation suggests it could be a factor in the state's unemployment uptick.

From July to August, the number of nonfarm payroll jobs in Arkansas rose by 18,000, totaling 1.2 million, according to labor data that was not seasonally adjusted. The biggest gains came from the government sector, 7,600, attributed to the hiring of census workers and the start of a new school year. Next was hires in retail, 3,100, and administrative and support services, 3,000. There were also 1,000 or more jobs added in the educational and health services, construction, and leisure and hospitality sectors.

National retailers such as Target, Walmart, Home Depot have fared well during the pandemic, but smaller stores have struggled or closed. Despite the challenging economy, retail jobs have rebounded, Pakko said.

"This is somewhat surprising," he said, and indicative of healthy consumer spending.

Compared with August 2019, data show nonfarm jobs in Arkansas remain down by 45,500. Sectors with the largest declines were manufacturing, which has lost 17,900 jobs, followed by the leisure and hospitality sector with 17,800 fewer jobs, attributed to job losses in durable goods manufacturing and food services. The health care and social assistance sector has lost more than 10,000 jobs, and 2,200 are gone in the finance and real estate sectors.

Meanwhile, the trade, transportation and utilities, and professional and business services sectors posted job gains of 7,800 and 1,600, respectively, from a year ago.

August data show nearly 51,000 more unemployed individuals in the state compared with last year, when there were 69,000 more employed. 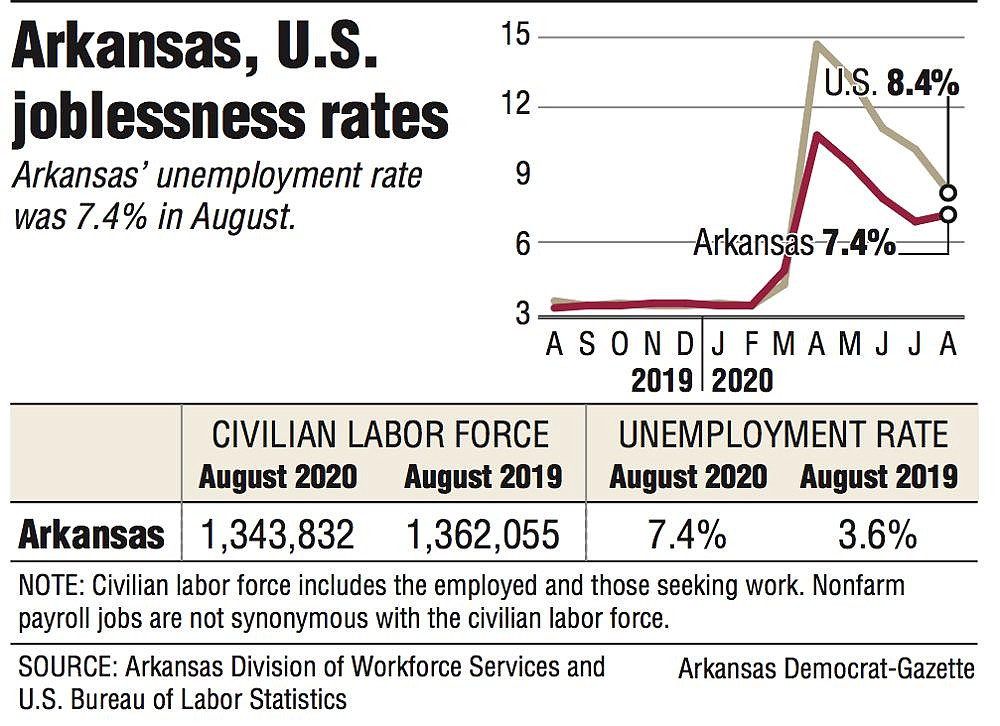 Graphs and information about the Arkansas and U.S. joblessness rates.
ADVERTISEMENT