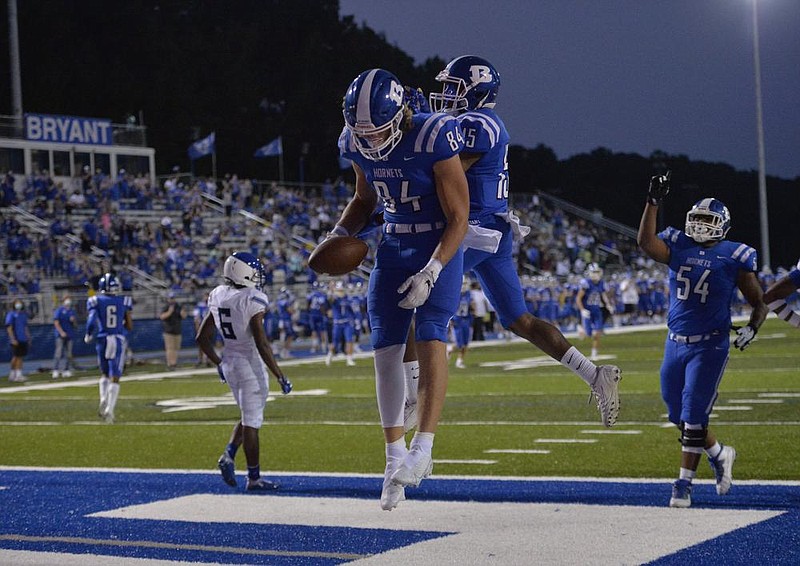 Bryant tight end Hayden Schrader (84) celebrates with receiver Jordan Knox (15) after scoring against Trinity Christian on Friday at Hornet Stadium in Bryant. The Hornets rallied to win 44-40 to extend their winning streak to 20 games. More photos at arkansasonline.com/919trinity/ (Special to the Democrat-Gazette/Jimmy Jones)

BRYANT -- It was prime time for a comeback, but the Bryant Hornets stopped it short.

After staking itself to a 22-point lead in the first half, Bryant had to hold on for a 44-40 victory over the Trinity Christian Tigers from Cedar Hill, Texas, a team led by senior quarterback Shedeur Sanders, a son of Pro Football Hall of Fame defensive back Deion Sanders, who serves as the team's offensive coordinator.

Shedeur Sanders, who has committed to play for Florida Atlantic, completed 18 of 25 passes for 324 yards and 4 touchdowns.

Trinity Christian (3-2) rallied to take a 40-38 lead midway through the final quarter, but Bryant (3-0) regained the lead on quarterback Austin Ledbetter's 9-yard run with 4:26 remaining.

Ledbetter's 1-yard sneak with 8:52 left in the first quarter gave Bryant a 7-0 lead.

Trinity Christian responded three plays later with a 77-yard touchdown pass from Sanders to Cam'Ron Silmon, and after a missed extra-point attempt, was within 7-6.

A 44-yard touchdown run by senior running back Tanner Anderson gave Bryant a 21-6 lead with 1:22 left in the first quarter.

Ledbetter's screen pass to senior running back Xavier Foote turned into a 54-yard touchdown that gave Bryant a 28-6 lead with 7:15 left before halftime.

"We relaxed a bit," Bryant Coach Buck James said, "but they're a very talented offense. They got a great quarterback, very talented receivers, a big offensive line. You're not going to hold guys down like that every minute of a game. I think our kids grew up a little bit."

"Bryant's players knew where to be," Trinity Christian Coach Andre Hart said. "They're fundamentally sound. They did everything well. I can learn from Coach James and some of the things he did tonight."

On its next possession, Trinity Christian was within 28-12 after Sanders tossed an 18-yard touchdown pass to senior receiver Robert Williams.

Late in the second quarter, Trinity Christian turned a Bryant turnover into an 11-yard touchdown pass from Sanders to senior receiver Jordyn Williams to pull within 28-19.

Trinity Christian scored to start the second half on a 34-yard touchdown pass from Sanders to Williams to cut Bryant's lead to 28-25, but Bryant answered with an 80-yard kickoff return by Anderson to start its possession at the Trinity Christian 8.

After Bryant stopped Trinity Christian on downs at the Trinity 30, it settled for a 22-yard field goal by senior Brock Funk to lead 38-26 with 2:28 left in the third quarter.

"You can't take nothing away from them," James said. "They're going to beat a lot of football teams. They're good."

"You can't compare playing the game to coaching the game, but coaching is still very rewarding," Deion Sanders said. 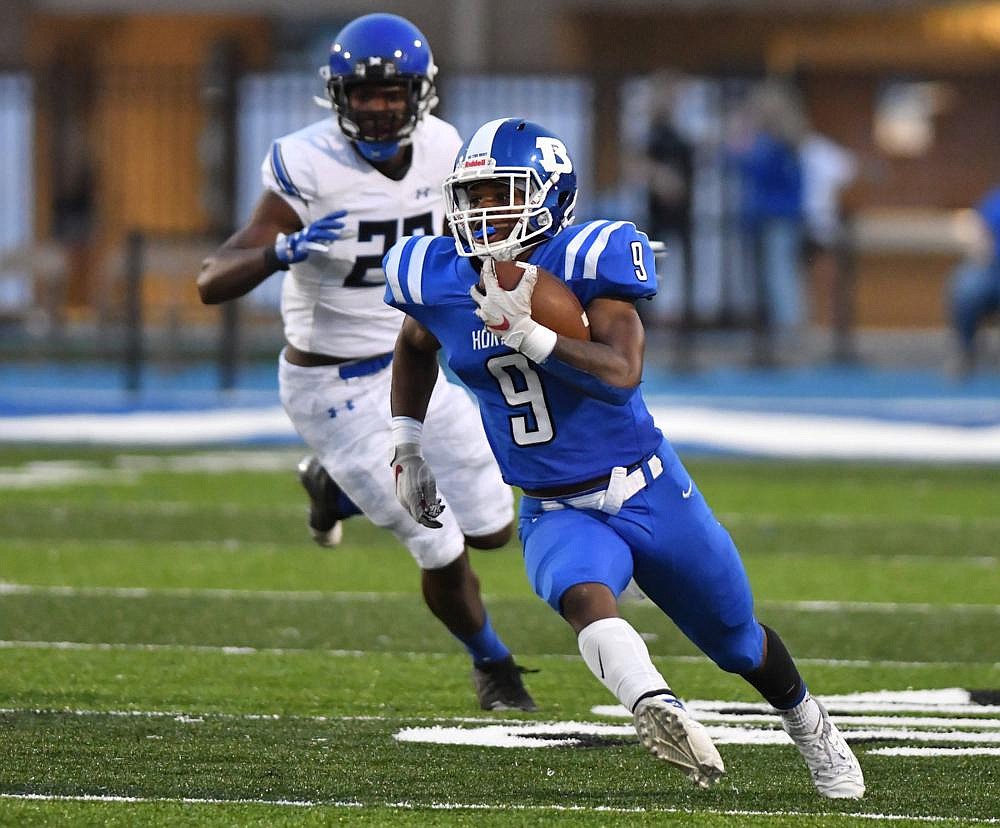 Bryant running back Tanner Anderson (9) looks for running room. His 44-yard touchdown run with 1:22 left in the first quarter gave Bryant a 21-6 advantage. (Special to the Democrat-Gazette/Jimmy Jones) 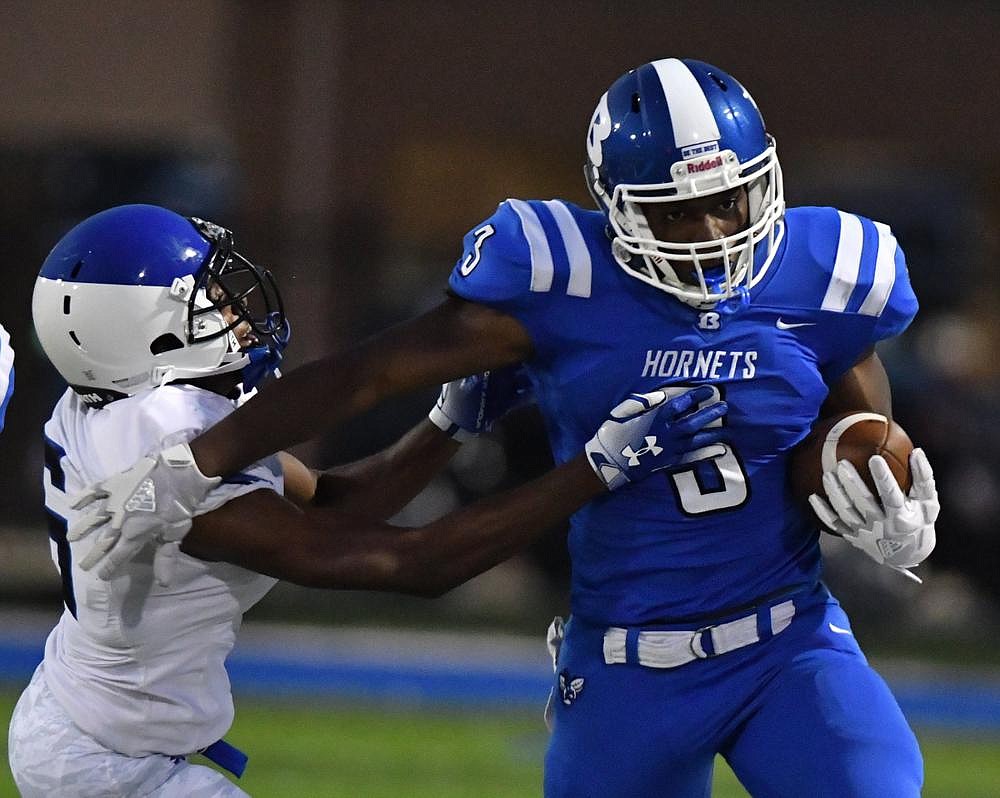