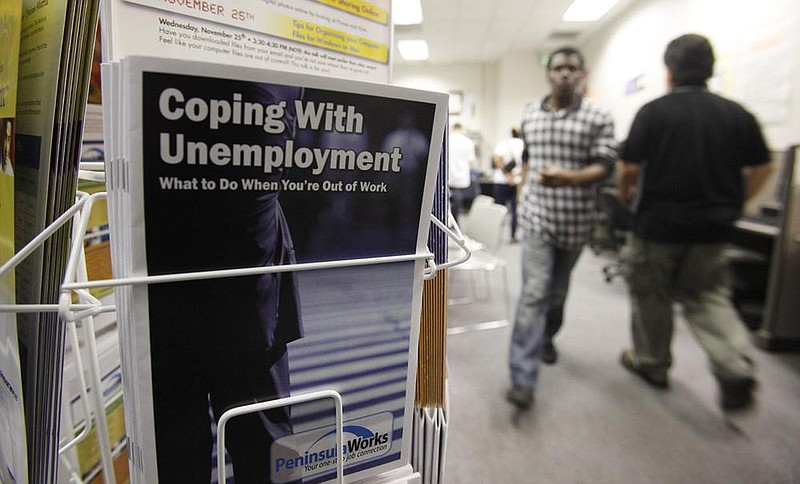 People arrive to seek employment opportunities at a JobTrain office in Menlo Park, Calif., in July. The Department of Labor reports that more than 6 million Californians are claiming Pandemic Unemployment Assistance benefits each week. (AP)

Scammers appear to have inflated jobless claims numbers in California by the hundreds of thousands in recent weeks, likely making national tallies of Americans on unemployment benefits look even worse than they already were.

Between mid-August and the first week of September, applications for Pandemic Unemployment Assistance -- a federal relief program intended for self-employed workers and independent contractors -- doubled in California to more than 524,000, far above claim levels when the federal program first launched in April, the state's Employment Development Department said Thursday.

After the most populous state took action to deter suspected scammers from filing false applications in hopes of getting payments, Pandemic Unemployment Assistance applications dropped sharply to 145,790, a decline of more than 72%, the department said.

The Department of Labor didn't immediately respond to requests for comment.

Those figures feed into a national total that the Department of Labor continues to report each week as an official tally of almost 30 million Americans receiving unemployment benefits, despite problems with inflated numbers that have been evident for months.

On the other hand, weekly national figures on initial unemployment claims -- the widely watched headline number, which is separate from Pandemic Unemployment Assistance -- may also be overstating the pace of layoffs: the California numbers showed 46,062 applications submitted last week for regular state benefits, compared with 230,225 that were processed, a number that corresponds with the state figure in the national report released Thursday.

That indicates the national figures may reflect states catching up with backlogs rather than representing the most recent levels of actual job losses.

In any case, the fraud issue in California underscores the widespread unemployment data challenges -- including clerical errors and double counting -- that state employment departments have faced since the pandemic began in March. Errors can skew economists' outlook for the labor market because claims data are used to look for signs of distress in the job market and any recovery, along with details at the state level.

Federal Reserve Chairman Jerome Powell on Wednesday cast doubt on the reliability of the national Pandemic Unemployment Assistance figures, saying during a news briefing that the "actual counting of the claims is volatile" and it's difficult to "take much signal about the particular level."

Since the beginning of August, 34 arrests have been made in California related to unemployment fraud, with more expected in the coming weeks.