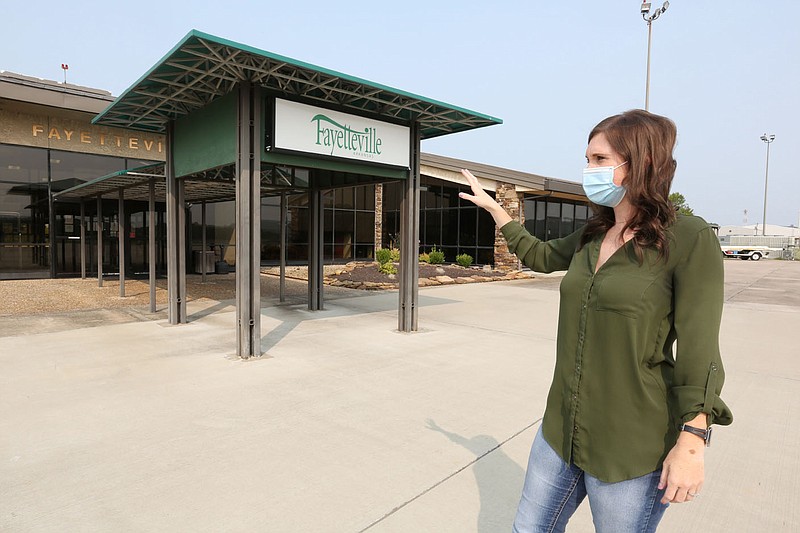 Summer Fallen, airport services manager at Fayetteville Municipal Airport, describes Friday, September 18, 2020, the renovation work that will be taking place in the terminal. The airport received a Federal Aviation Administration grant for $1.3 million to make energy efficiency improvements to its terminal, including replacing windows and improving the building's heating and air-conditioning systems. Check out nwaonline.com/200919Daily/ and nwadg.com/photos for a photo gallery. (NWA Democrat-Gazette/David Gottschalk)

FAYETTEVILLE -- The terminal at Fayetteville Executive Airport is getting an update to replace 1970s era climate control systems and windows as part of a terminal energy improvement project.

The city will use a $1.3 million Federal Aviation Administration grant to replace the full heating, ventilation and air conditioning system, including ducting, as well as a boiler and windows. A chiller for the system will also be moved to improve access.

All the equipment is original to the terminal, which was constructed in 1978, according to airport officials.

"If you're familiar with the airport at all, the first thing you would notice is the entire east side of the building is windows, along with a large portion of the west side, so we lose a substantial amount of heat and cooled air because of the broken seals on the windows, and it makes it substantially more difficult to heat in the winter time."

C.W. Crawford Construction of Fayetteville will do the work. Garver engineers did an earlier evaluation of the terminal, designed the systems and will oversee the project at a cost of $55,000. The city's share will be $8,909, which is the cost of contractor insurance.

Airport officials will submit a grant application to the Arkansas Department of Aeronautics for the remaining 10% of the project costs at its completion.

Total project cost is expected to be almost $1.46 million.

The terminal building has undergone numerous renovations since it was built, including repurposing of the baggage handling area into a meeting room, removal of the commercial kitchen and restaurant, addition of a pilot lounge and the enclosure of a large portion of the original open lobby to make additional offices for airport personnel and outside business.

The outside businesses moved into the facility after most commercial air service and related businesses moved to the Northwest Arkansas National Airport at Highfill after it opened in 1998, according to airport officials. The renovations have led to an inefficient patchwork in the heating and air system with outdated controls.

The airport received an Arkansas Department of Aeronautics grant in 2018 and replaced one of the boilers.

The airport was selected in November by the FAA to receive a grant for the heating and air conditioning replacement project, according to airport officials. 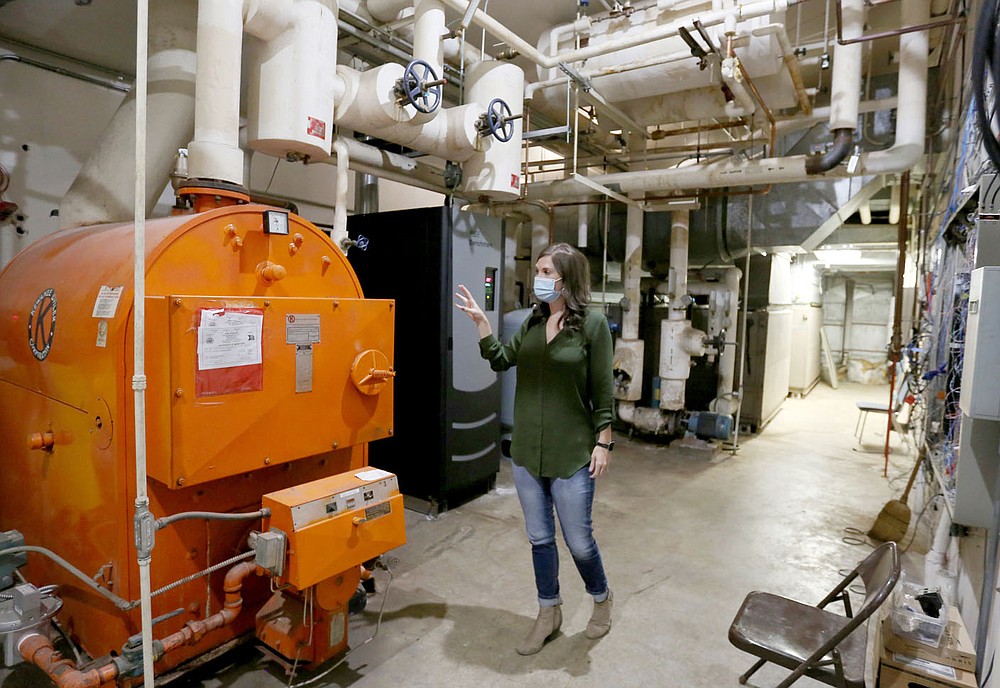 Summer Fallen, airport services manager at Fayetteville Municipal Airport, describes Friday, September 18, 2020, the renovation work that will take place in the mechanical room in the terminal at the airport. The airport received a Federal Aviation Administration grant for $1.3 million to make energy efficiency improvements to its terminal, including replacing windows and improving the building's heating and air-conditioning systems. Check out nwaonline.com/200919Daily/ and nwadg.com/photos for a photo gallery. (NWA Democrat-Gazette/David Gottschalk)
More News

Flight activity at Fayetteville Executive Airport — also known as Drake Field — is up since the covid-19 pandemic hit, thanks to general aviation enthusiasts having more time on their hands, according to Summer Fallon, airport manager. “General aviation has seen a huge uptick since covid,” Fallon said. “Our operations are up 2.5 percent for the year.”

Fallon said that takes into account losing all air charters for University of Arkansas spring sports and traffic that would normally fly in to the airport to attend events at the university.