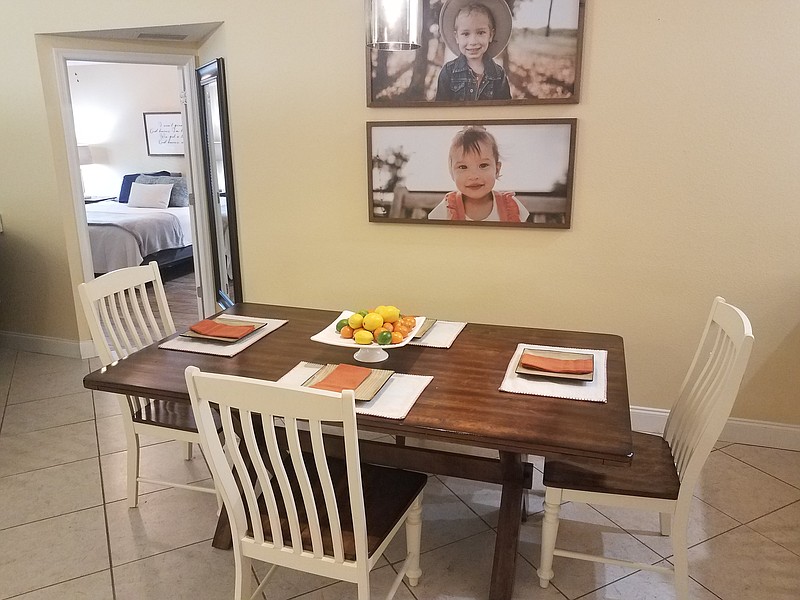 Dining area after: In the dining area, we declared the table a zero-clutter zone, set it with orange placemats, and coordinating cloth napkins, and added a centerpiece with fresh citrus. (Courtesy of Marni Jameson.)

Talk about a no-win situation. My stepson, Brett, and his wife, Tara, put a down payment on a new house. Now, they just needed to sell their current house.

I knew what was coming. I braced. "So ... Brett and Tara want to list their house," my husband, DC, said. "They would like your help staging it."

The kids' house was, I cannot say it any other way, a mess, a cluttered, toys-everywhere, beds-unmade, laundry-on-the-floor mess. Two working parents, long commutes, two kids under 4, and two dogs had conspired to push housekeeping far down the priority list to somewhere below a good night's sleep, which also didn't happen. And, as many of you know, once havoc takes root, it overtakes.

You don't need a family therapist to tell you that having your stepmom and step-mother-in-law bossing you around your own house, telling you to pick up your things, declutter, donate, redecorate, and generally pull the house together is not a recipe for family harmony.

"Given a choice between a good relationship with the kids and having their house meet my standards, the relationship comes first," I continued.

I don't know what DC said, but I imagine he said something, like, "Listen to Marni. She knows what she's doing. She might come in like chainsaw Al, but trust her."

He may have reminded them of his experience five years ago. We were planning to get married, but first he wanted to sell his house, so we could buy one together. He asked for my staging help. Or maybe I insisted. (I was motivated!) We walked around his house. He took notes on a legal pad as I fired out a to-do list. Though I needed to issue CPR a few times, he followed my advice. The first buyer who walked in bought the house for the asking price.

Whatever he said, the kids were primed. We started with a Zoom-by-room call. I was frank. They took the advice well, which was basically: "Get rid of 60% of what's in here."

"And put it where?" Tara asked. Their two-car garage was already packed to the point that they had to park outside.

"In the garage," I said, "for the garage sale you're going to have."

"Garage sale?" They groaned, but to their credit, the next weekend, they moved a mountain of stuff onto the driveway and held a garage sale. They traded castoffs for cash (ka-ching), and hauled what was left to the donation center.

With the four-bedroom, two-bath house thinned out, we could start staging. DC and I arrived the following Saturday, and pushed up our sleeves. I called out instructions, while DC and Brett followed behind with a ladder and hammer. (If only all life worked that way.) We moved furniture, rehung art (universally too high), moved or removed drape panels, replaced light bulbs so their temperatures matched (no more warm and cool), filled more trash bags, made a dozen more decor moves, then accessorized with color.

Instead of resistance, I was met with wholehearted willingness and appreciation.

By the end of a long day, the home had gone from looking like "a frat house" to use Tara's description, to a model of tidy living. The photographer came. The listing went up. The house sold the same day for full price to the first buyer who walked in. Their pleased listing agent Matt Bruno, from Berkshire Hathaway HomeServices, of Trinity, Fla., who called the transformation "amazing."

While that was rewarding, far more gratifying were the texts and comments from the kids.

"I could not envision our home ever looking the way we got it to look," Tara told me. "I thought it would be impossible. We had so much stuff. I didn't know where to start. But now that it's clean and nice, I can't imagine living any other way.

And this from Brett: "We haven't touched any of the stuff we have in the garage since we moved it out there. We can let go of it. We just don't need as much as we thought."

Folks, I've said before, if you want to have a beautiful orderly home that lifts your mood and doesn't add to your stress, live like you're selling. Once you get your home show-ready, it's easier than you think to keep it there. The advice is the same: declutter, deep clean, decorate.

Here's what we did in few rooms.

◼️ In the master bedroom, we decluttered, styled the bed with two large decor pillows, lowered art, added bedside lamps, opened blinds, removed tired drapery and got all cords out of sight. (No phone-chargers.)

◼️ In the kitchen, we took all items off the refrigerator, cleared counters of clutter, put appliances out of sight, and added fresh yellow dishtowels.

◼️ In the dining area, we declared the table a zero-clutter zone, set it with orange placemats, and coordinating cloth napkins, and added a centerpiece with fresh citrus.

◼️ The kids' rooms, we removed bulky dressers and stored all clothes neatly in the closets. We moved any furniture blocking a window, thinned toys, and corralled stuffed ones to the head of the bed.

Syndicated columnist Marni Jameson is the author of five home and lifestyle books, including "Downsizing the Family Home — What to Save, What to Let Go" and "Downsizing the Blended Home — When Two Households Become One."