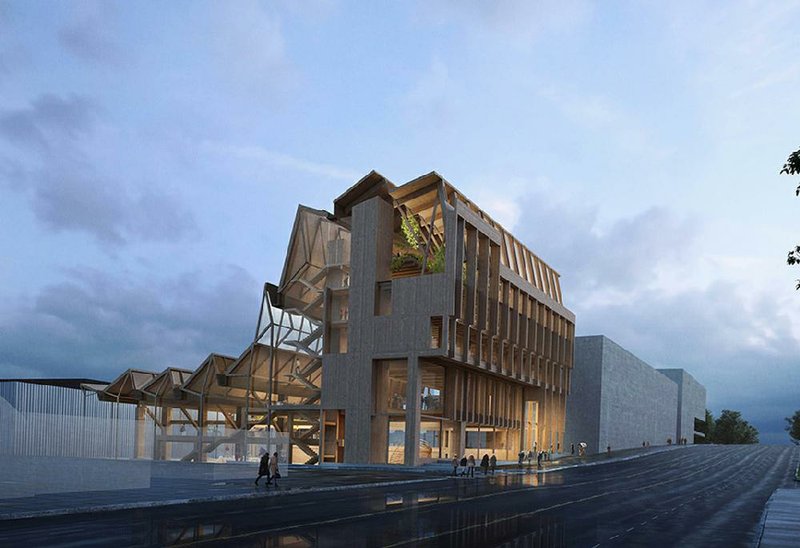 Here is a conceptual design by Grafton Architects for Anthony Timberlands Center for Design and Materials Innovation. (Special to the Arkansas Democrat-Gazette)

FAYETTEVILLE -- A pair of ambitious construction projects with a combined cost of $57.5 million will move forward at the University of Arkansas, Fayetteville after receiving approval from trustees Friday.

A $38 million renovation of UA's historic Fine Arts Center and a $19.5 million architecture facility known as the Timberlands Center that's being designed by an award-winning Irish firm both have ties to unprecedented grant support for arts education at UA.

But a bond issue and state funds will help finance the construction, according to documents presented to trustees.

In 2017, the university announced a $120 million grant supporting arts education from the foundation overseen by the family of Walmart founder Sam M. Walton. The grant was described by UA as the largest-ever gift to a U.S. university to support an art school.

UA officials at the time said the gift included $10 million in support of renovating the Fine Arts Center, a structure built in 1951 and designed by renowned architect Edward Durell Stone, a Fayetteville native. The building is listed on the National Register of Historic Places, according to documents presented to trustees.

Steinmetz said the $38 million project cost reflects the age of the building and an effort to return it more closely to its original appearance.

"It's a full interior and exterior renovation of the building. In fact, a lot of it is bringing the building back to its original design. In particular, the lobby, which was enclosed some years ago, will be reopened and restored to its original use" as a "pre-function" space near the center's concert hall and theater, Steinmetz said.

A general obligation bond issue as well as campus reserves, along with donor gifts, will pay for the project, according to meeting documents.

Gerry Snyder, executive director of the UA School of Art, said in a phone interview last month that the renovated facility will house arts education and art history programs. He said visual arts student spaces currently in the Fine Arts Center will move to the Windgate Art and Design District, where construction on a new four-story arts building is set to begin this fall.

The university's top architect choice for the renovation is New York-based Deborah Burke Partners working with Miller Boskus Lack Architects, a Fayetteville firm, Steinmetz said. Con-Real, a firm based in Arlington, Texas, is the top choice to be the project's general contractor, he said.

The Anthony Timberlands Center for Design and Materials Innovation is to be built at the Windgate Art and Design District site, so named because of a $40 million gift from the Windgate Foundation, the largest-ever single grant awarded by the foundation.

Steinmetz sought approval from trustees back in March to select Grafton Architects, a Dublin-based firm whose co-founders won this year's prestigious Pritzker Prize. At the time, the estimated project cost was $16 million.

"The additional money that will be added to this project is coming from additional donations and private sources," Steinmetz told trustees Friday.

The project is to be paid for using $11,815,000 in private and external funds and $7,685,000 in state funds, according to information presented to trustees. UA spokesman Mark Rushing said the state total includes about $185,000 from the UA Fay Jones School of Architecture and Design.

Rushing said in an email that the added cost isn't making the center bigger, but that the new gifts will help with "sustainability goals, design excellence and overall quality of construction," which are considered "especially important for a school of architecture and design to demonstrate."

The center will house timber and wood design initiatives within UA's architecture school, as well as fabrication technology laboratories. An early design concept for the Timberlands Center by the Irish firm showcases wooden trusses that form a cascading roof for the structure.