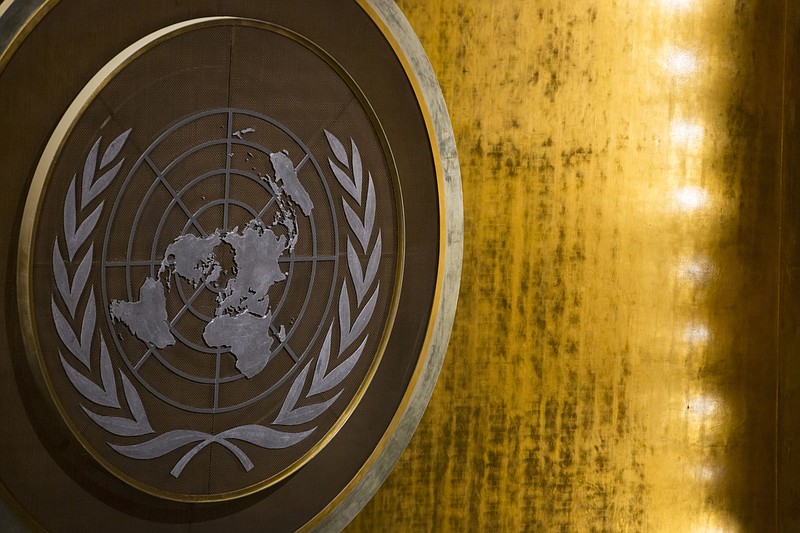 The emblem of the United Nations is seen during the UN General Assembly meeting in New York on Sept. 20, 2017. (Bloomberg photo by Caitlin Ochs)

The Trump administration's push to end the 2015 nuclear deal with Iran comes to a head this weekend at the United Nations, where allies and adversaries argue the U.S. effort to restore sanctions is groundless.

The U.S. bid to restore all U.N. sanctions on Iran -- which Secretary of State Michael Pompeo contends will go into effect Sunday in the middle of the U.N. General Assembly -- deepens a chasm between the U.S. and most other nations. European allies say the U.S. has no right to invoke the accord's "snapback" provision because President Donald Trump quit the multinational deal to restrain Iran's nuclear program two years ago.

The U.S. and a handful of Mideast allies are declaring the end of the nuclear deal while most other Security Council members -- from Russia and China to Germany, the U.K. and France -- disagree.

"The U.S. will obviously put pressure on others to implement sanctions," said Ashish Pradhan, a senior U.N. analyst at the International Crisis Group. "I'm sure some of the Gulf states, Israel and others will issue some statements saying they recognize the reimposition of sanctions. But on the U.N. Security Council, it seems like they'll hold the fort."

The U.S. asserts that all of the U.N. resolutions on Iran that were in place before the 2015 deal -- from a ban on arm deals to restrictions on the Islamic Republic's ballistic missile activity and its nuclear enrichment -- will go back into effect. To enforce those measures if countries like Russia and China disregard them, the U.S. could use tools such as secondary sanctions on shippers, insurers and banks and may even threaten interdictions of ships at sea.

The U.S. deadline comes two days before Trump is expected to deliver a speech remotely Tuesday to the U.N. General Assembly, which is being held virtually this year due to the pandemic. Trump is likely to renew his past denunciations of Iran and vow to enforce the renewed sanctions, which Russia and China have already said they will flout by selling advanced weapons to Tehran when a U.N. arms embargo expires in October.

The president is also expected to address what he's called "the dawn of a new Middle East" -- the U.S.-brokered accords signed last week at the White House between Israel and the United Arab Emirates and Bahrain.

The other key participants in the nuclear accord all reject the U.S. move, seeking to keep the agreement on life support in case Joe Biden wins the presidency in November. Biden has pledged to rejoin and then improve the deal.

"Iran invites the international community to be vigilant about the U.S. bullying against other countries in violation of international law," Alireza Miryousefi, an official at Iran's U.N. mission, said in a statement.

If the Chinese and Russians move ahead with "big press announcements about future arms sales," the U.S. could apply crippling secondary sanctions, which would punish not only defense companies but also those they deal with, according to Richard Goldberg, a former National Security Council official under Trump.