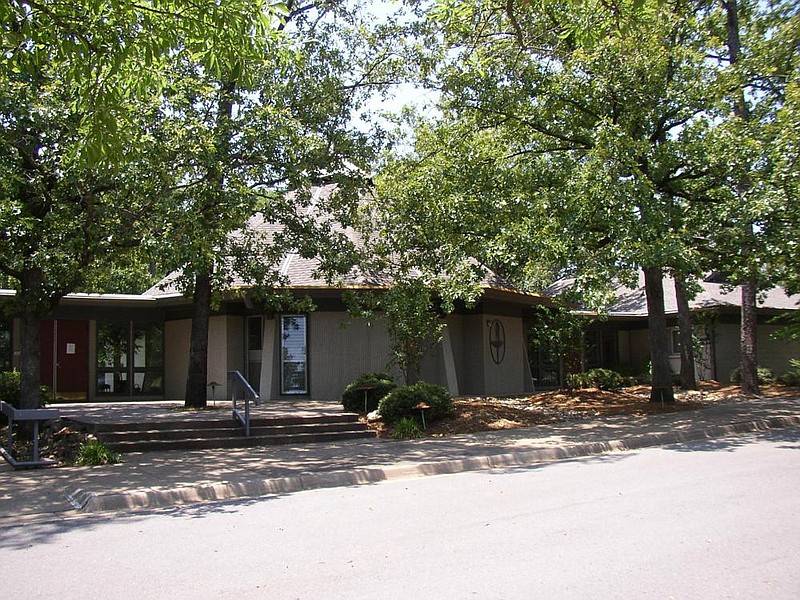 Unitarian Universalist Church of Little Rock, shown here in 2010, is currently undergoing an approximately $1.5 million building project that includes renovation and expansion of the church’s sanctuary and religious education buildings, with the goal of improving the church for future generations. (Special to the Democrat-Gazette)

Through a building project, a congregation in Little Rock seeks to improve conditions for its current members while making room for potential new members and future generations.

Work on Unitarian Universalist Church of Little Rock on Reservoir Road began in March, according to the congregation. The approximately $1.5 million project includes details throughout the church, such as repainting and new plumbing, with the largest overhaul occurring in the church's sanctuary.

"We're a very, very welcoming faith, and there's room for everyone," said Bill Kimpel, the construction liaison for the project. "We want our facility to kind of showcase that, but we need to be updated and be a little bit more encouraging to folks.

"[People unfamiliar with the church] drive up, they've seen something; maybe they've talked to someone," Kimpel said. "They want to try something and they drive up, and the landscaping up front is basically half-dead or disappeared, and so it's barren, and the carpeting is old. We're going to remedy some of that."

The church has occupied the same plot of land -- originally 2½ acres and now about 7 acres -- since it was built in the 1960s, and the congregation is celebrating its 70th anniversary this year.

Phil Peters, a retired doctor and the communications chairman for the project, said the expansion is the first major construction for the building in 30 years. According to the CALS Encyclopedia of Arkansas, the last construction was undertaken in 1985 and completed in time for a General Assembly event that drew 2,000 Unitarian Universalists.

The Little Rock congregation first conceived of an upgrade several years ago with several goals in mind: to better fit the needs of the current congregation in terms of its atmosphere and "spiritual space," to make it more attractive to potential new members and to better serve the community.

Other religious and community groups use the facilities, according to Sue McDonald, president of the congregation. Unaffiliated regulars at the church include a Hindu group that hosts classes in the church's three buildings on Sunday afternoons and a Narcotics Anonymous group that meets at the church twice a week.

"We want to have better facilities ... because we consider ourselves [as] having a responsibility to the greater community as well as to the congregation," Peters said.

The Unitarian Universalist faith does not have a set of beliefs that everyone must adhere to, although all are committed to seven guiding principles, such as recognizing the inherent worth and dignity of others, and engaging in a free and responsible search for truth.

Nancy Kimpel, who ha's been involved with the church for most of her life, said most of the congregation's members were raised in other faiths, though each has a common bond through their membership at the church.

Nancy Kimpel's father, Maxwell Lyons, was part of the group that bought the property and -- as theirs was one of the only buildings on Reservoir Road at the time -- had utilities installed. Later married to Bill Kimpel, Nancy was 9 when her parents found Unitarian Universalist Church in Little Rock.

"This is a place for anyone," said Nancy, who said all members share the values of peace, love and understanding. "[There's] no creator dogma, but we're there to support each other, and those ... principles and affirmation of the covenant bind us together. We want to be more of a beacon of liberal religion, and by updating and renovating our building we were hoping that more people would be interested in taking a look."

Work on the church's religious education building began in March, Kimpel said, and lasted around two months. Suspended ceilings and new LED lighting have been installed, a kitchen has been replaced, some plumbing has been upgraded and one of the bathrooms is now ADA compliant.

The sanctuary, located between the religious education building and its fellowship hall, Thompson Hall, is undergoing demolition with several changes in mind. Some of the trees that populate two-thirds of the church's land plot will be removed as that portion of the building is expanded in the shape of a 180-degree arc. It's an expansion that will accommodate more people without compromising its octagonal shape, Kimpel noted. A new feature will be audio and visual facilities. Between 40 and 50 seats will be added in the worship space, and large glass panels will share a view of the untouched land with those in the sanctuary.

An aspect that the church has taken into consideration is to make the building more environmentally friendly "even thinking of the pandemic, in terms of ventilation," Peters said. "We've tried to include that as much as we can, with things we could upgrade in the future, too."

Some of the trees will be cut -- Peters said the current building is hidden behind some overgrowth -- and will make it more visible to potential members.

"It's like when you go to a restaurant," Peters said. "You drive up and you sort of make the decision, if you've never been there ... 'Are we going to go inside and try this?'"

Kimpel, who has led the church's facilities committee for the past five or six years, said the church's age and the need for renovation created an opportunity for the congregation.

"There's no lack of opportunities, you know, around an older church," Kimpel said. "It's actually in very good shape, but it's not fancy. And so I think we felt that we needed to add ... our version of elegance." 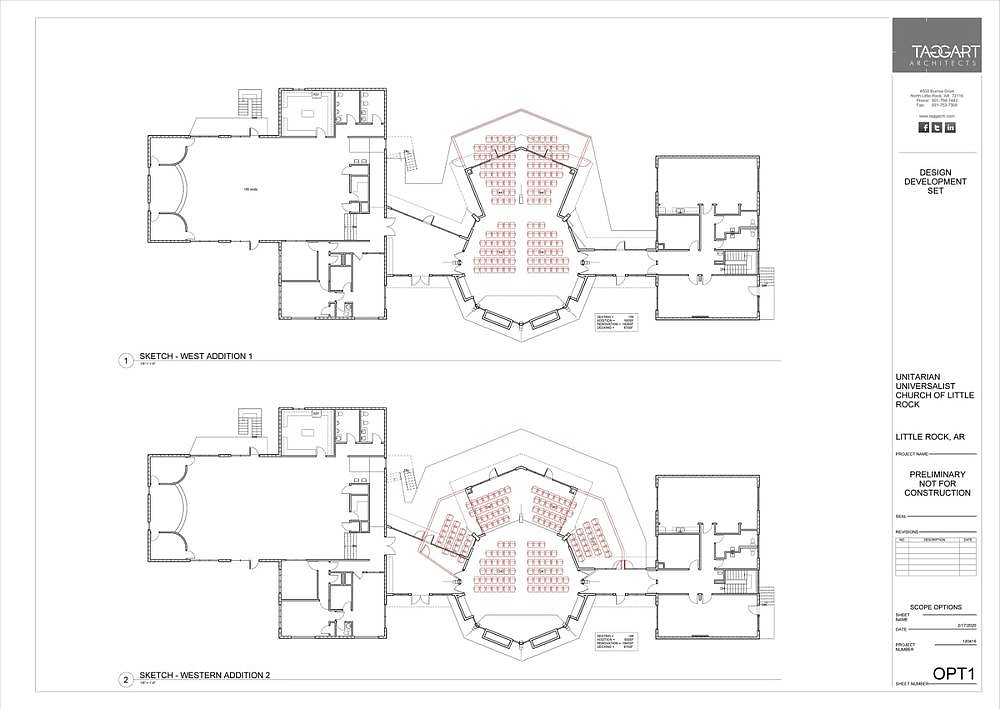 A print of the church’s sanctuary comparing the seating layout of its sanctuary before (top) and after its expansion project, will be the church’s first major improvement on the building since the 1980s. (Special to the Democrat-Gazette) 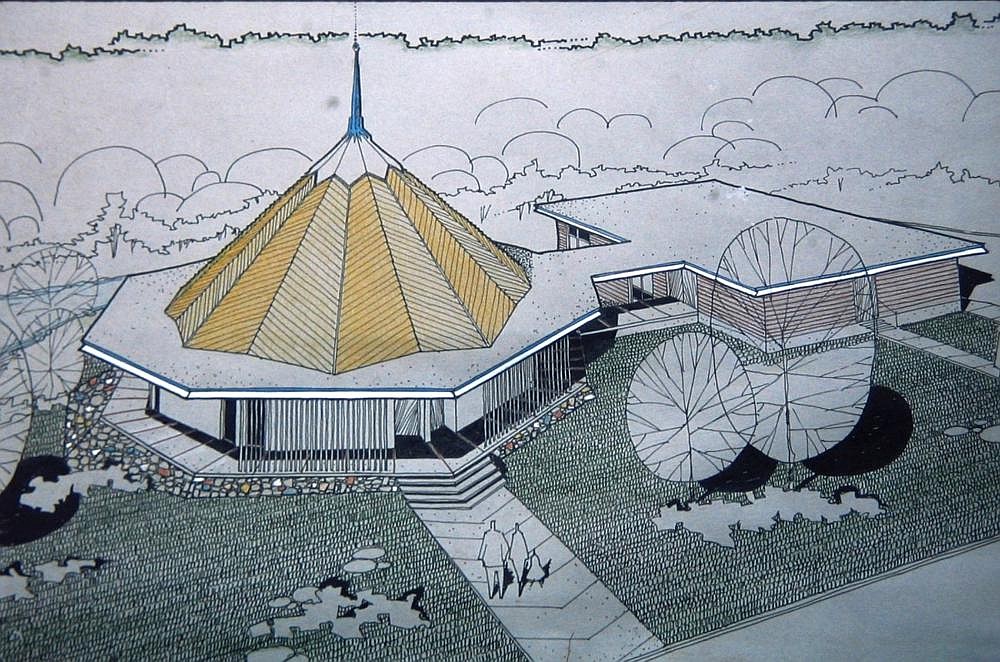 A 1964 depiction shows Unitarian Universalist Church of Little Rock’s building on Reservoir Road. The church is currently undergoing a renovation and expansion project that is expected to be completed in March. (Special to the Democrat-Gazette)
ADVERTISEMENT