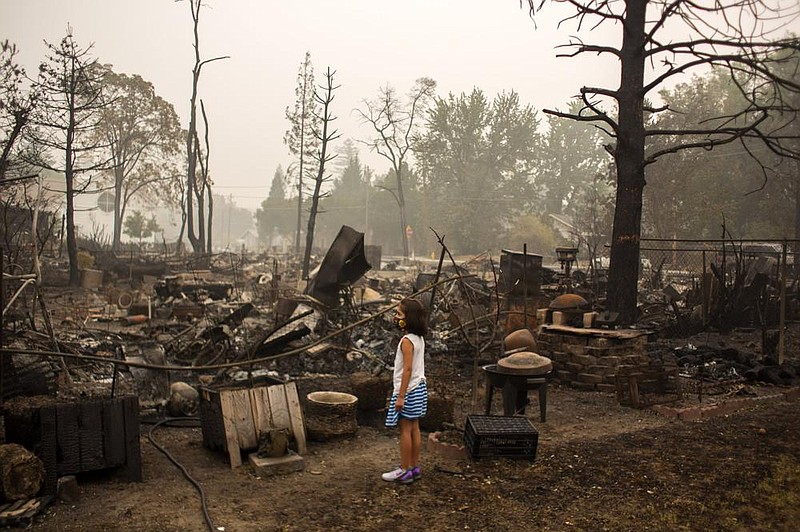 Izel Ramos-Gonzalez, 7, looks over her grandmother’s backyard in Phoenix, Ore., on Sept. 12. Area officials estimated that nearly 1,800 houses and businesses were destroyed in the Almeda Fire last week, which burned through parts of Phoenix and nearby Talent. (The New York Times/Alisha Jucevic)

PHOENIX, Ore. -- In a season that has seen fast-moving fires lay waste to millions of acres along the West Coast, perhaps no town has seen the destructive fury that leveled parts of Phoenix, Ore.

In the span of a few hours Sept. 8, the Almeda Fire burned through large parts of not only Phoenix but the neighboring town of Talent, together home to 11,000 people. Local officials estimated that the fire destroyed nearly 1,800 houses and businesses.

The ruin was so widespread that a week later, authorities still would not allow residents to return home to see what was left. For days, many of the displaced were forced to scrutinize bits of aerial footage for clues, while others hiked for miles to get around roadblocks.

Four days after the fire, a New York Times reporter stood in a Home Depot parking lot on the outskirts of town, trying to find a way in. The National Guard had blocked the main entry points, and police were patrolling the streets for people who had sneaked in, worried about the danger of downed power lines and sinkholes.

And then a yellow school bus pulled up.

Behind the wheel was a burly grandfather in sunglasses and an orange reflective vest. He introduced himself as Lee Gregory, 63, a local minister and school-bus driver originally from, of all places, Paradise, the site of California's deadliest fire. After creating a charity for his hometown when it burned in 2018, he now faced disaster in his new home. Within a day, he restarted the charity and threw himself into another relief effort.

The bus rumbled down Oregon 99, the main thoroughfare in Phoenix and Talent that had now become a path through the wreckage.

Riding along was another passenger, whom Gregory had picked up two days earlier, in the same Home Depot parking lot. Stuart Warren, a 35-year-old Phoenix councilman, who had been looking for ways to help constituents. The duo had since been carrying perishable food from powerless supermarkets and displaced families to evacuation shelters.

Warren did not seem like your average politician. He was a bearded fly-fishing guide with a duck-call ringtone who had moved to Phoenix in 2015 because he could not afford a house in his hometown, Ashland, Ore.

For decades, the town has been a lower-cost haven from the nearby cities of Medford and Ashland, offering cheap housing, an idyllic Pacific Northwest setting and access to medical care and jobs minutes up Interstate 5. That mix has attracted retirees on fixed incomes and farm workers who pick the sweet Comice pears from nearby orchards that end up in Harry & David gift baskets shipped around the world.

The Almeda Fire disproportionately hit those residents, wiping out about a dozen tightly packed trailer parks. Local officials and residents said that many homeowners in those parks lacked insurance, in part because fire did not seem to be a threat; they could hear the freeway from their bedrooms. And none of them owned even a slice of land; they rented the small plots where their trailers once sat.

With such a financial blow, many of those people will struggle to return, and some said last week that they did not want to. For local leaders, it raises the question: Can Phoenix ever fully recover? And if it does, will it have a place for the people who once called it home?

"When this starts getting cleaned up, big money will come here and invest, just like they did in Paradise," Gregory said. "These towns won't be back the way they were."

Gregory steered the bus past the Harry & David headquarters and toward the police checkpoint that marked the start of the burn zone. He smiled and waved, and a police officer waved the bus through.

Quickly, the earth was black on both sides. The bus passed pile after pile of rubble, some still with signs telling of what was once there. There was D&S Harley-Davidson, a motorcycle shop; the Rogue Action Center, housing a nonprofit group working on climate change; and Umpqua Bank, where the only thing left standing was the vault.

"It gets worse every time," Warren said.

Gregory began to slow down. A woman was walking alongside the road, in an area where she was not supposed to be. He tooted the horn, stopped and swung open the doors.

She had been hiking back to the Home Depot. She climbed aboard, and Warren and the reporter hopped off.

A SEA OF CINDERS

Not far from where the bus stopped, a neon sign announced Royal Oaks Mobil Manor, a 55-and-older trailer park that was now a sea of cinders.

Sandra Nickerson, 78, a retired long-haul trucker, who had lived there, got on the phone from the evacuation center where she was staying to try to direct a Times reporter to her home. She held out hope that it was still there. Continue down the middle road, she said, "and take a left at the purple house." Her house number was 61.

There was no house, no numbers and no purple. Everything was gray.

Nickerson was a Phoenix lifer. She had attended the same brick schoolhouse as her mother. She recalled the Fourth of July parade, fishing on the Rogue River, and pancakes and ham at the Phoenix truck stop. She had raised her family in Phoenix, while her husband drove a bus for Harry & David, shuttling farm workers to the pear orchards. She had planned to die there.

"I'd stay right there in Phoenix, if there was a place to live," she said. "But there isn't."

On Monday, her son picked her up from the evacuation center and took her north to Portland.

At her trailer park, each plot was a pile of ash, with a few identifiable items. Metal chair frames. A barbecue smoker. Hubcaps. A satellite dish. A melted patio chair floated in the pool. It was silent other than the distant din of I-5 and the chirping of birds perched on charred branches overhead.

"Trying to describe the destruction, really the only words I can come up with are absolute," he said. "These folks' homes. I mean, they want to come back to sift through their stuff. But there's nothing to sift through."

The next morning, Gregory delivered his first sermon since the fire had left 10 of his parishioners homeless.

Nearly 50 people gathered on the cushioned seats, few with masks. A five-piece band was on the stage, with Gregory's wife, Doreen, on keyboard. Gregory paced on the carpet below, wearing the same orange bus-driver vest over his shirt and tie.

"We are going to cry out to God for help," he said.

Gregory stood in front of his congregation again.

"I want to take you on a journey," he said, as aerial footage of Phoenix's destruction began to play on a screen. "The Bible teaches you: You don't always get to plan your journeys." 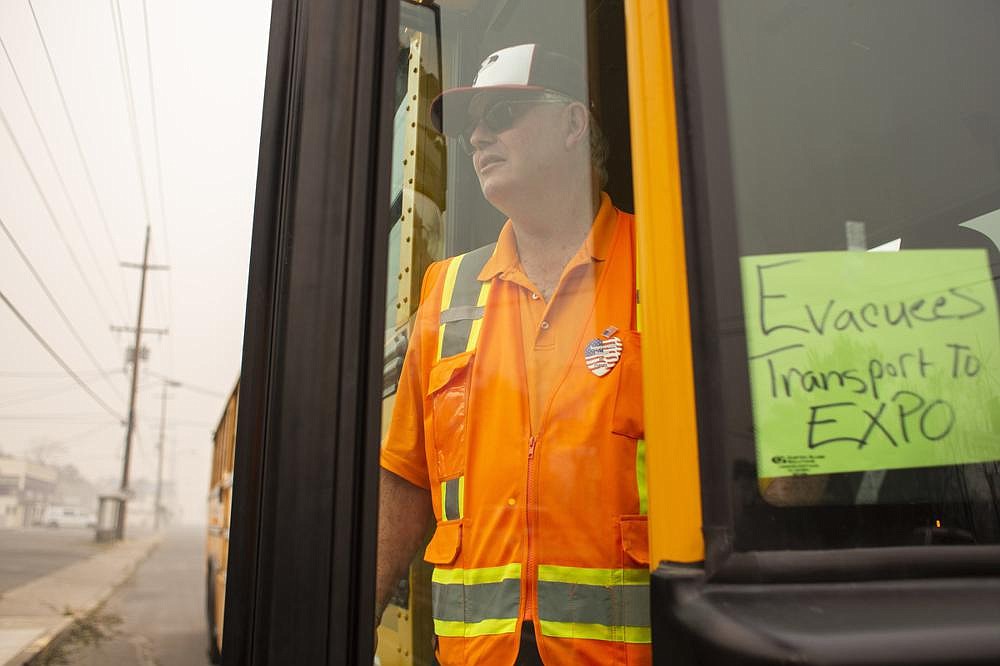 Lee Gregory, a local pastor and school-bus driver in Phoenix, Ore., is helping residents in his town, which was devastated by the Almeda Fire. In the span of a few hours on Sept. 8, the fire burned through large parts of not only Phoenix but the neighboring town of Talent. (The New York Times/Alisha Jucevic) 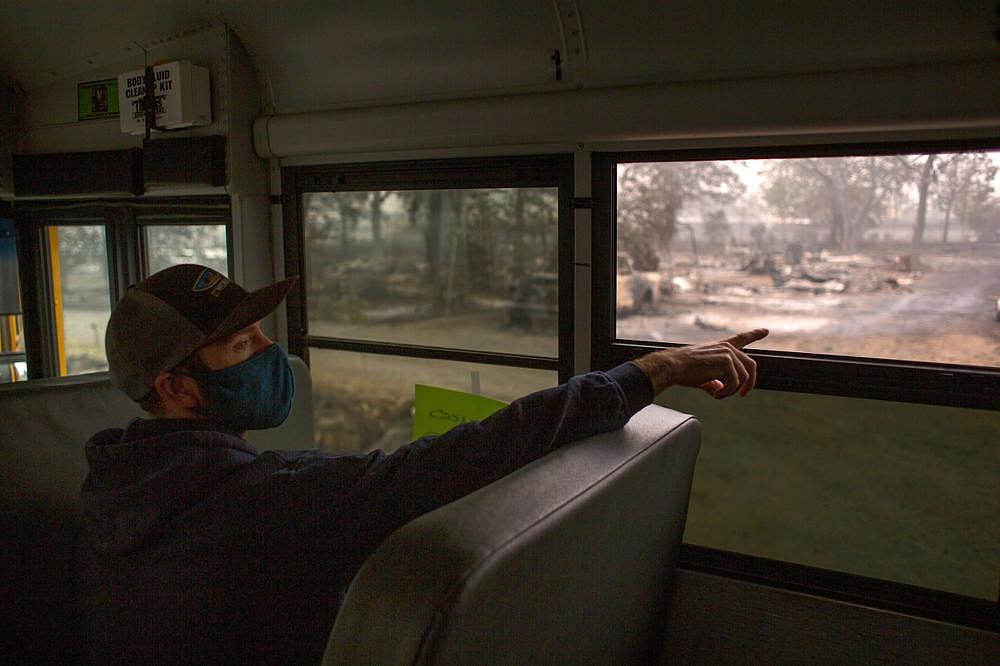 Stuart Warren, a town councilman, points out a house he once lived in that burned, in Phoenix, Ore., a town devastated the previous week by the Almeda Fire. (The New York Times/Alisha Jucevic) 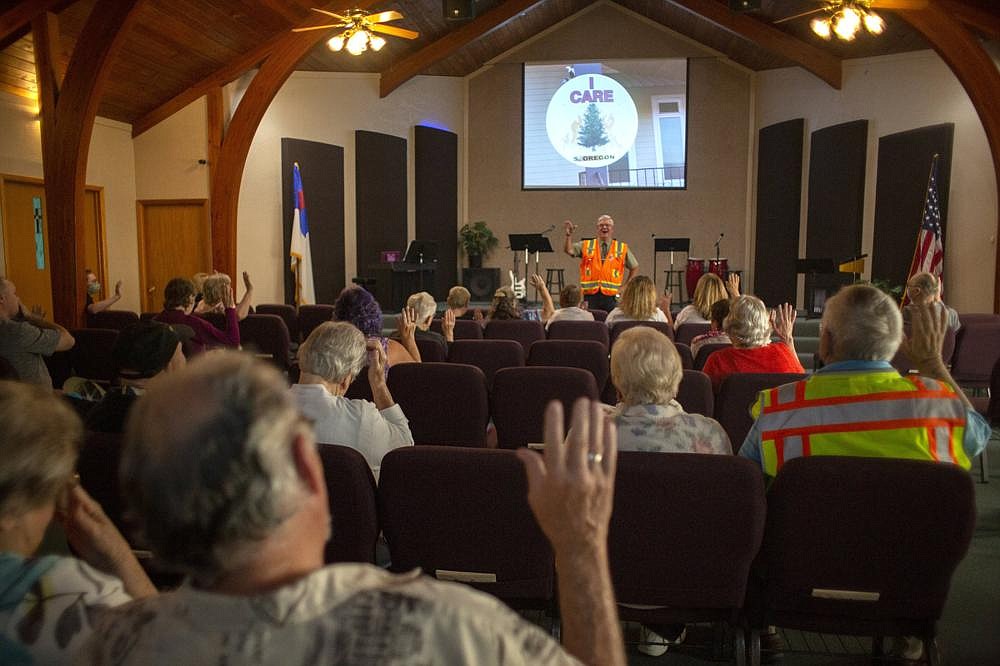 Pastor Lee Gregory delivers his first sermon since the Almeda Fire swept through nearby towns, leaving 10 of his parishioners homeless, in Medford, Ore., on Sunday. (The New York Times/Alisha Jucevic)
ADVERTISEMENT